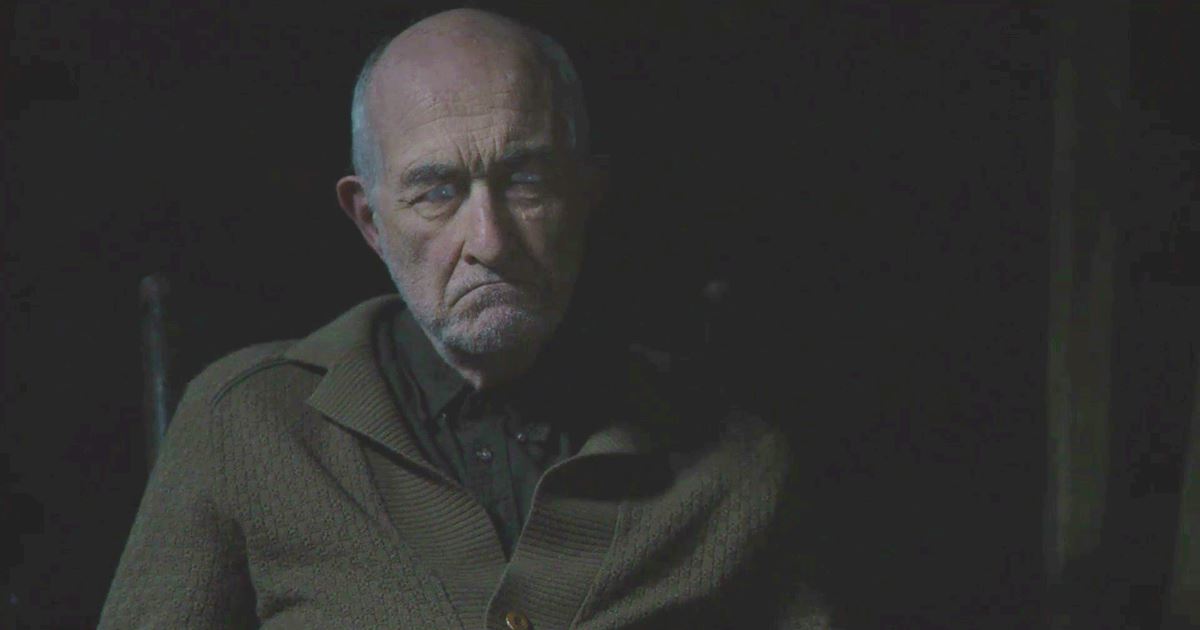 In the Soviet Union, 1977, we see a little boy, Alexi, playing the piano. His parents come into the room to tell him that they are leaving for America that night and he must say goodbye to his grandfather, who is too old to travel. As Alexi says goodbye, his grandfather takes his hand, gives him a penknife and tells him that the world bears no gifts - if you want something, you take it. We are brought back to the present at Camp Stillwater and we see Alex using the very same penknife to cut those mysterious name tags off his clothes. Jason arrives and, after reminiscing about old times at camp, tells Alex that he would like to be called "Blotter" now. 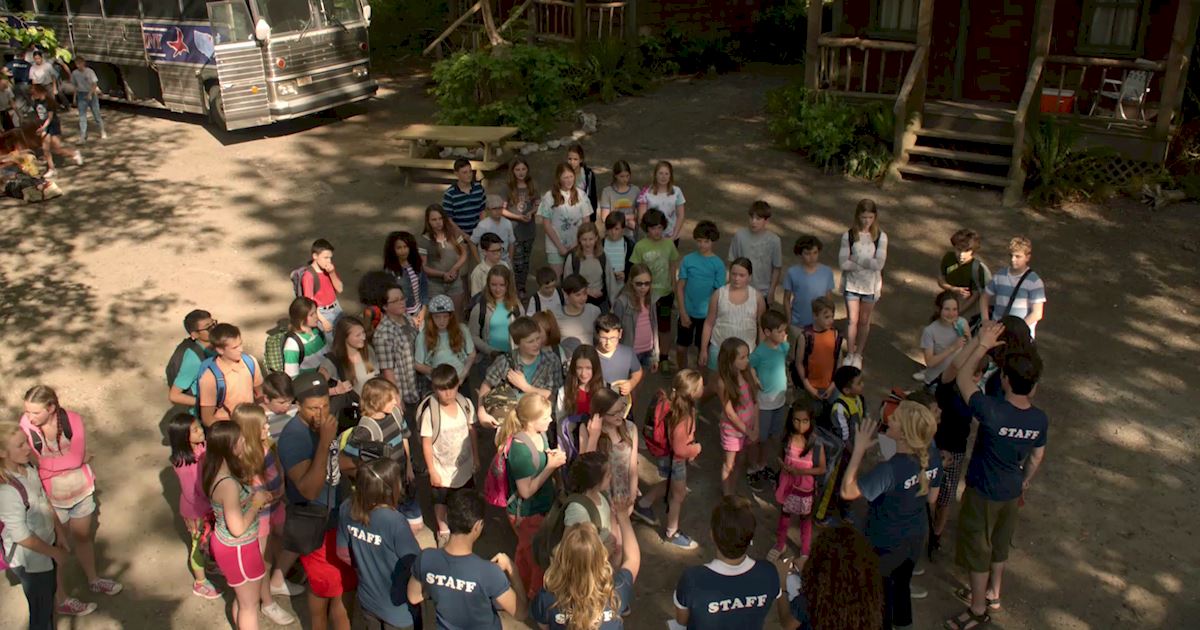 The campers arrive and, as the bus pulls up, we see the Tall Man watching from the forest. The counselors come out to greet the campers and assign them to cabins. While the campers get settled in Alex and Blotter decide to engage in a friendly bet to see who can get "the girl" first. Blotter bets Alex $50 that he can get Cricket before Alex gets Amy. As the campers unpack, Blotter calls out the name Anton Melnikov, who turns out to be a boy who is sitting alone on his bunk. When the other boys hear his name, they laugh and call him a “commie”. We are then brought to a drycleaner in 1977 where we see a customer yelling at Alexi’s dad, Mikhail, for using starch on his clothes. Mikhail’s boss, Tommy, comes out and apologizes to the customer and jokes about the price you pay “for hiring commies”. After the customer leaves, Tommy spots Alexi. Annoyed that Mikhail brought him into work, he tells Alexi that he should change his name to something he can pronounce. After he leaves, we see Alexi practicing how to say “my name is Alex Powell” in the mirror. 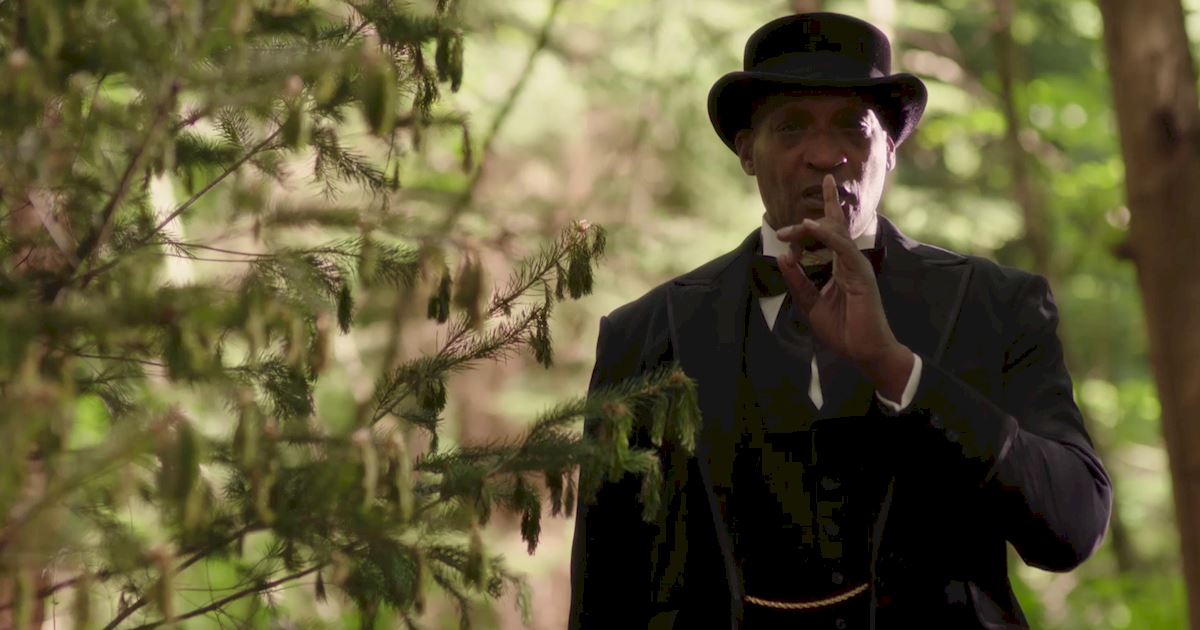 Back at camp, Alex is flirting with Amy when they spot Anton, alone in the forest, talking to himself. After Alex tells him to go back to his cabinmates, he tells Amy that Anton should change his name to something American. Amy tells Alex to cut Anton some slack and when Alex says he didn’t know Amy was such a “commie sympathizer”, she calls him a jerk and storms off. Alex then spots Blotter getting a mysterious package from local drug dealer Damon in the forest. Later on, the counselors are at dinner when Alex realizes Anton is missing and takes off to look for him. He finds Anton in the forest, talking to an imaginary person again. When Alex asks who he's talking to, Anton tells him he's talking to the Tall Man. Alex cannot see anyone, but we are able to see the Tall Man look at Anton and signal for him to be quiet. That night, Anton has a nightmare that the Tall Man brands his arm with the words “find me”. Hearing Anton scream, Alex wakes him up and tells him that he was only having a bad dream. 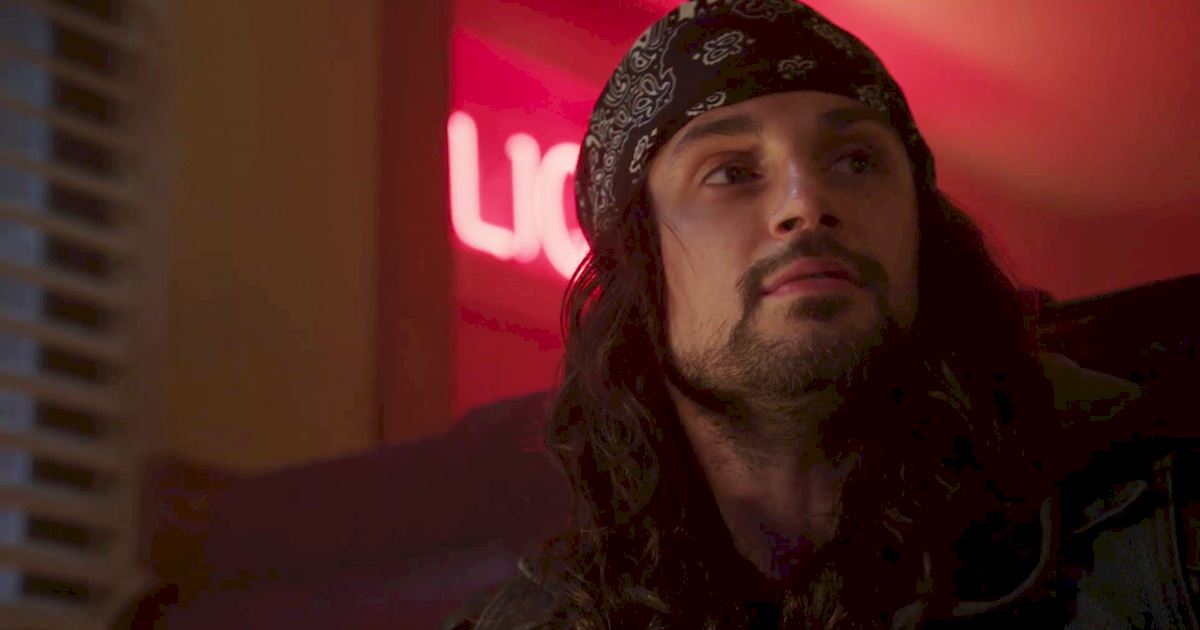 Deputy Sykes is in a bar where his mom works, looking through all the photos of the investigation so far. His mom says that she is worried about him and that he could be heading down the same road as his dad, but Sykes assures her that he is fine. Damon enters the bar with some of his friends. Sykes goes over to him and asks if he knows anything about the mysterious things that have been happening at the camp. Damon says that it must be his necklace that is making Sykes think he is some kind of Satanist, but then assures him that he got the necklace at an Iron Maiden concert. Sykes warns Damon that he better not catch him at the camp selling drugs and then leaves. Later that night, we see Blotter opening the package Damon gave him and we find out that it contains liquid acid. Alex says LSD is completely out of Blotter’s league, but Blotter says he’d never take it at camp. Alex then thinks that the Tall Man that Anton has been seeing, could in fact be Damon. 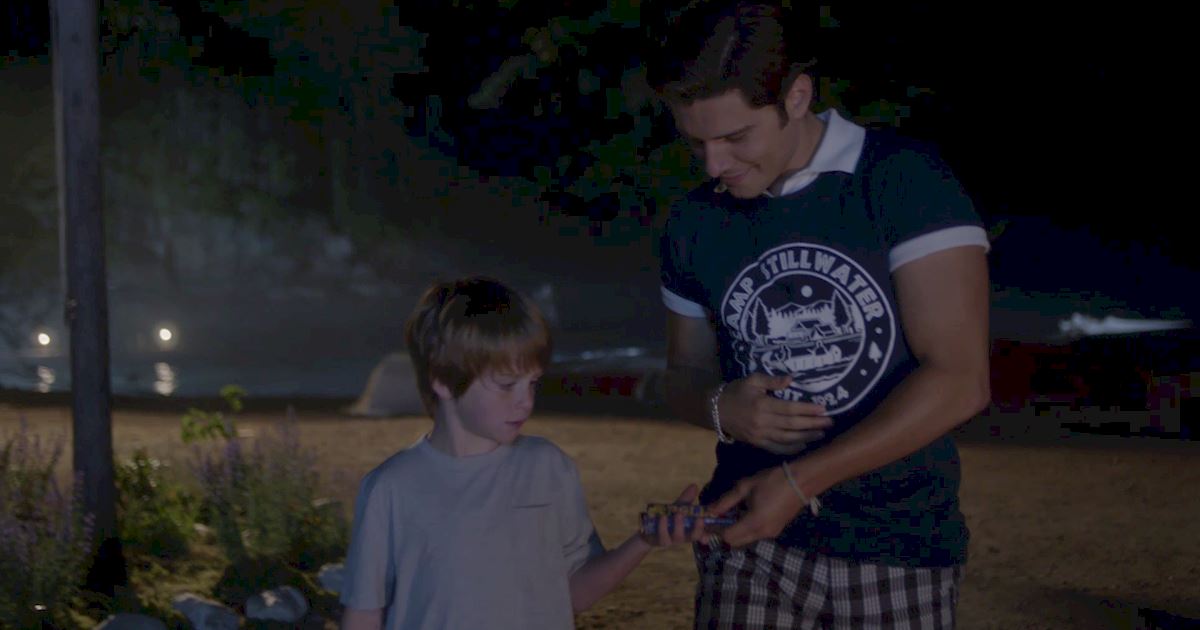 The counselors are all outside and Blair cannot stop looking at Drew. Cricket tells Blair that he only wants Drew because he cannot have him, but Blair thinks they have a connection. Blotter arrives and asks Cricket if she would like to smoke with him, but Cricket turns him down and turns to look longingly at Alex who is skipping stones with Amy. Jessie offers to help Cricket with Alex, but before she can explain, Cricket walks away. Down by the waterfront, Alex asks Amy out on a date in order to make up for being a jerk about Anton. Amy doesn’t know if she should say yes, but then one of the campers comes over and tells Alex that he is homesick. After watching Alex calm the young boy, Amy agrees to go on a date with him. Once Alex leaves, Jessie tells Amy to be careful; that Alex is charming, but he will do anything to get what he wants. We then see Alex giving the younger boy who was homesick some chocolate – he has tricked Amy!

It is now October 1988 and we see Alex going into the drycleaners where his father used to work. He tells the lady behind the desk, Nadia, that he is there to apply for a job and so Nadia fetches Tommy. Back at camp, Alex is walking outside when he sees something strange going on in the art studio cabin. Inside, he sees Anton drawing a picture of where he will find the Tall Man. Anton then tells Alex that if he doesn’t find him, someone will die! The next day, Deb is angry with Alex and Blotter for Anton being outside by himself after lights out and she says that if it happens again, one of them will be fired. Later, we see Joel going into Deb’s cabin where he finds the mysterious box that she dug up. Deb walks in and tells him to leave. On the tennis courts, Blotter asks Alex to lead a raid of Cricket's cabin with him that night, but Alex says he can’t as he has his date with Amy. 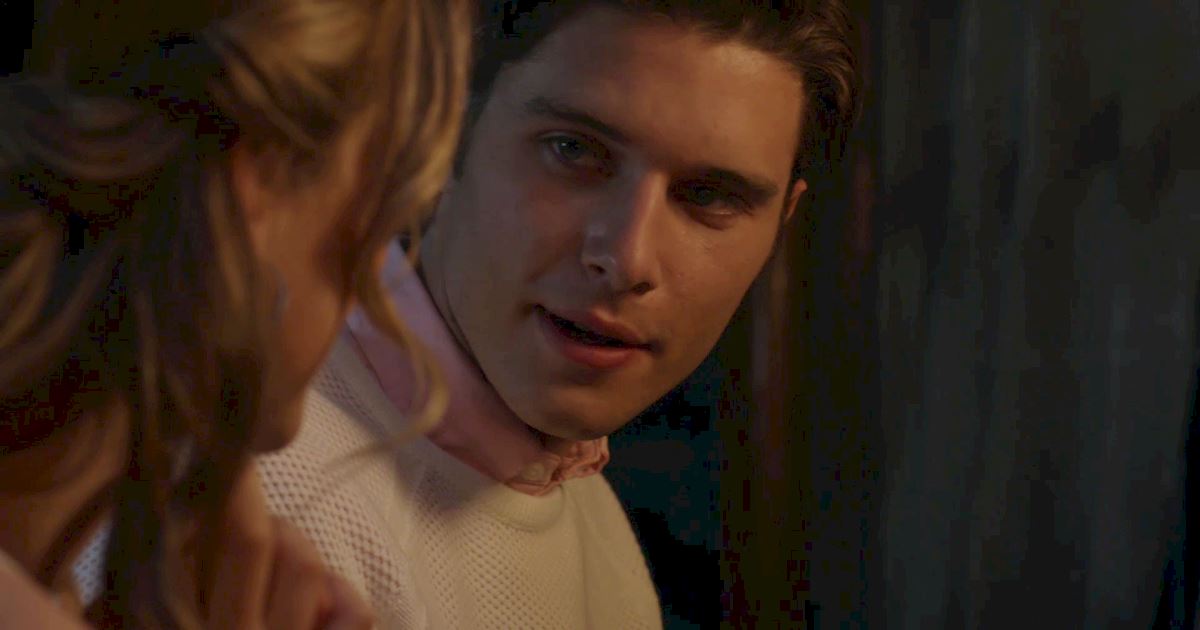 We are taken back to 1988 and Alex has got the job in the same drycleaner where his father worked. Tommy tells him that he can finish early before turning off the surveillance monitors and heading back into his office. Once Tommy is out of sight, Alex turns the surveillance videos back on and sees Nadia straddling Tommy while he un-buttons her blouse. Alex hits record. After some time has passed, we see Tommy on the phone consoling an angry customer. He blames Nadia for stealing clothes since she has not been seen at work for a while. After Tommy goes back into his office, Alex calls Nadia and asks her if she is ready to do as they discussed. Back at camp, Alex picks up Amy for their date and takes her to an old cabin. Inside, there is a piano so they sit down and Alex plays beautifully for Amy. Blotter, meanwhile, gets his campers excited for the raid. After the group charges off, we see Anton hang behind because he has spotted the Tall Man. Anton takes the Tall Man's hand and follows him into the woods. 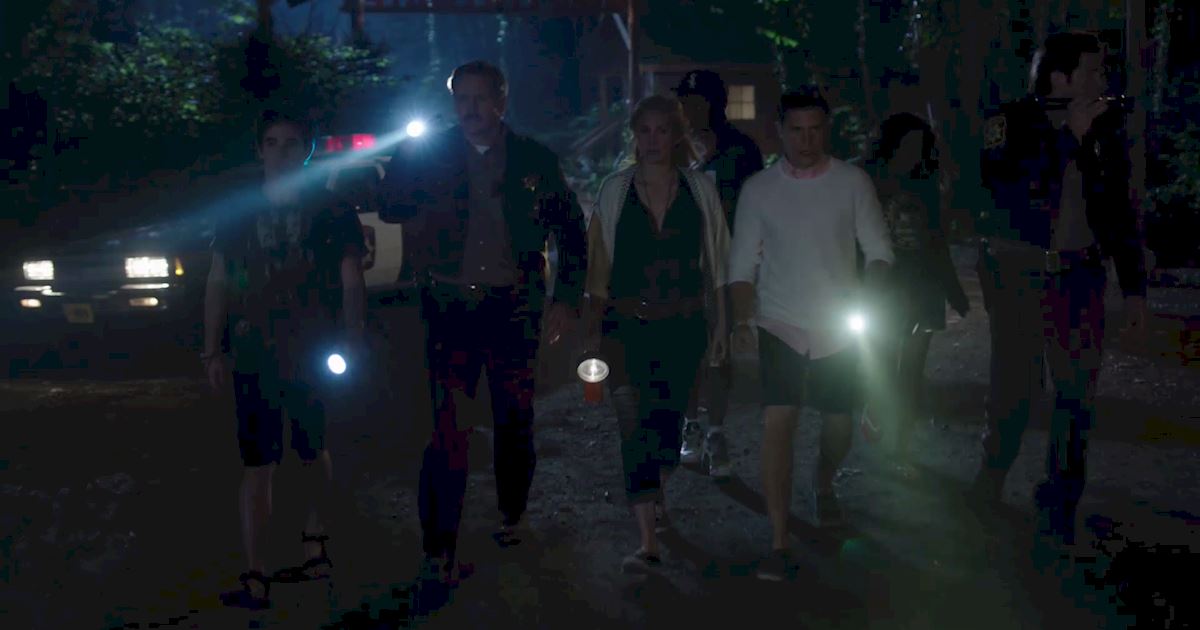 In the girls’ cabin, Blotter shows Cricket the old Dungeons and Dragons miniatures they used to play with, which makes her smile. Blotter tells her that he doesn’t believe all the things that are written about her on the walls. He leans in to kiss her, but Cricket turns away and Blotter decides that it is time to take the boys back to their cabin. Counting the group, he realizes that Anton is missing! Meanwhile, Alex tells Amy that his father died when he was 12 years old and that while he was a good man, he was not very strong. Amy feels for Alex and tells him that everyone was wrong about him. They lean in to kiss, but are interrupted by Blotter who charges in and announces that Anton is missing. Deb finds Alex and Blotter searching the woods for Anton and calls the cops fro help. Alex fills them in about Anton saying he had been seeing a Tall Man who told him that if he didn’t find him, someone would die. The group splits up and eventually finds Anton at the same rock formation we saw in his drawing. Sykes thinks that the Tall Man could be Damon and leaves to find him. 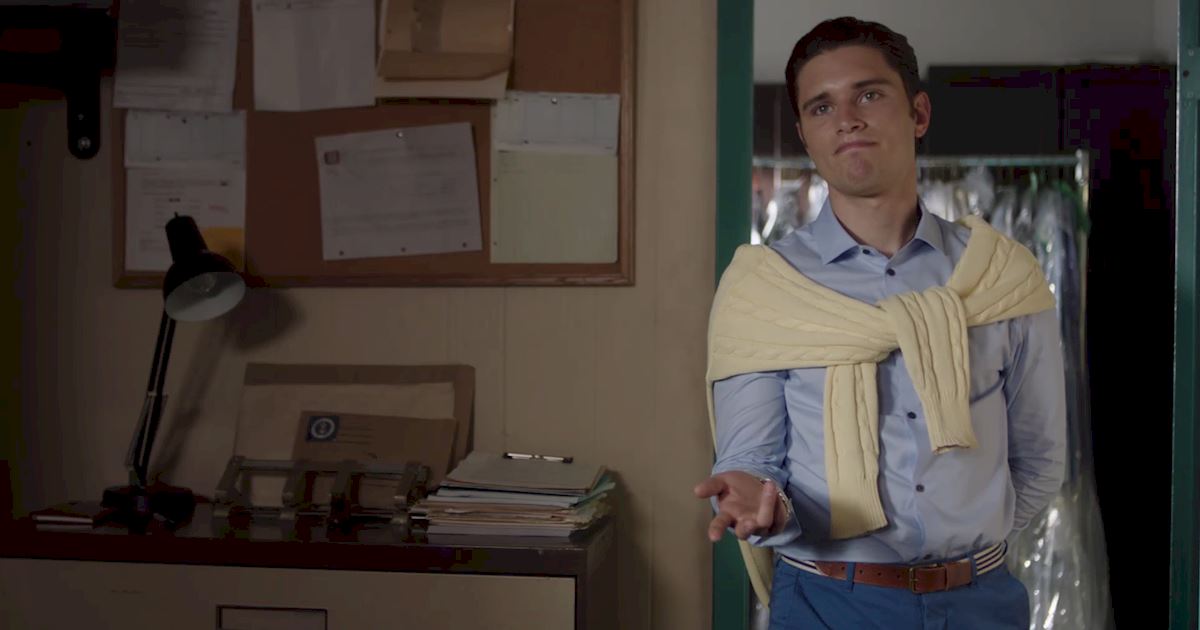 It is 1988 again and Alex tells Tommy that he is quitting his job. Tommy looks at what Alex is wearing and suddenly realizes that he has been the one stealing clothes! He goes to call the cops, but Alex stops him, saying that Nadia has a recording of them together in his office that she could show Tommy’s wife at any minute. Alex tells Tommy that the recording won't be shared if he is allowed to come back to take clothes from time to time and if Nadia is allowed her job back. Tommy is left with no choice. Back at camp, Blotter is freaking out that him and Alex are going to be fired. Alex tries to calm him down, but then he has a vision of his grandfather outside and remembers being told that if he wants something he should take it. Alex then doses Blotter's water bottle with some of the acid, which Blotter then drinks. Sykes, meanwhile, finds Damon and brings him into the station for questioning.

It's a fine line between the real and the imagined! 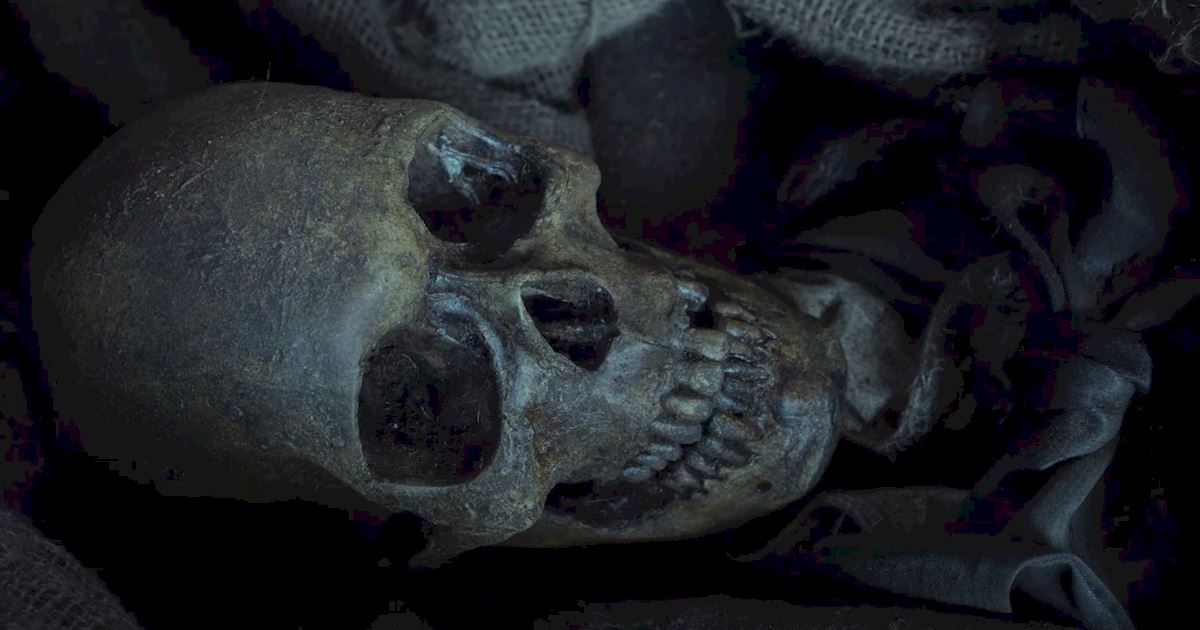 Later that night, Blotter is tripping out. Muttering “find me”, he runs into the forest and starts digging at the same rock formation where Anton was found. It is there that he uncovers a skeleton! Alex, meanwhile, tells Deb that he is worried about Blotter so they leave to go and find him. When they do, Blotter tells them about the skeleton, but when they get to the rock formation it's gone! Deb checks Blotter's pupils and realizes he is on drugs so she fires him. Damon, meanwhile, is released by the police as they have no evidence to hold him. He meets with his friends who have the skeleton in the trunk of their car! So Blotter was right all along! The next morning, Blotter says goodbye to everyone and stops at Alex to give him the $50 he won and to tell him that he knows he was the one who dosed his drink. Amy believes Blotter and storms off. As Blotter is making his way out of the camp, he sees the Tall Man. The Tall Man points something out to Blotter, but all we are able to see is the horrified expression upon Blotter’s face…

What was your favorite part in Episode 2?