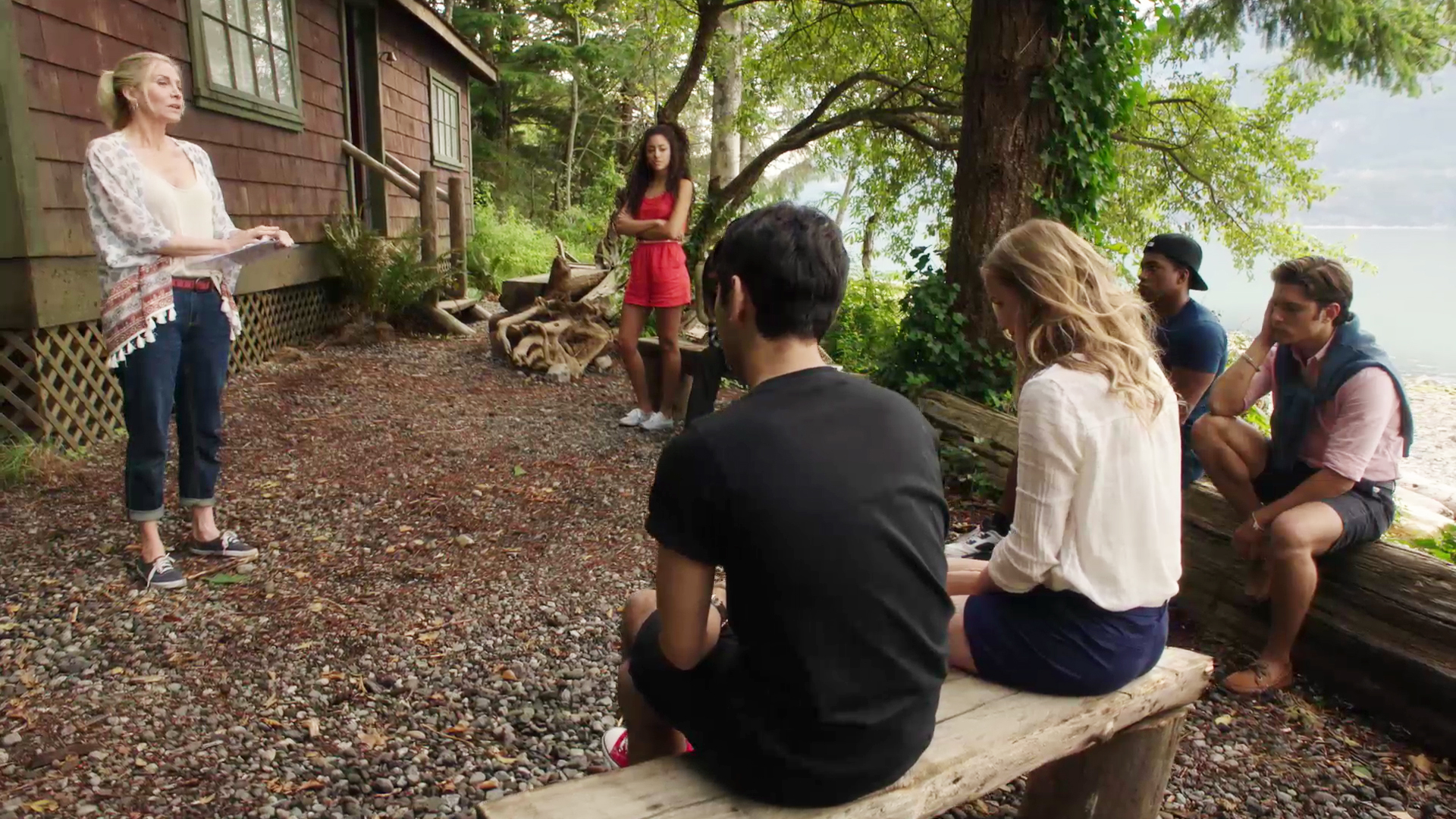 In a flashback, we see Jessie walking into her apartment to find there is a huge party going on. Her mother is smoking weed with a man so Jessie leaves to study in the stairwell. She has an interview for Northwestern University to prepare for. Her mother finds her on the stairs and encourages her to join the party. Back in the present, Jessie is on the phone to her mom assuring her that she is fine at camp. Amy interrupts the call and tells Jessie that Deb wants to speak to all of them. Deb talks to all the counselors and tells them that Deputy Sykes is under investigation for the death of Sheriff Heelan. She assures them that the satanic activities are over but they still need to close the camp. Amy insists that they give the kids one last good day before camp closes.

Jessie has a vision! 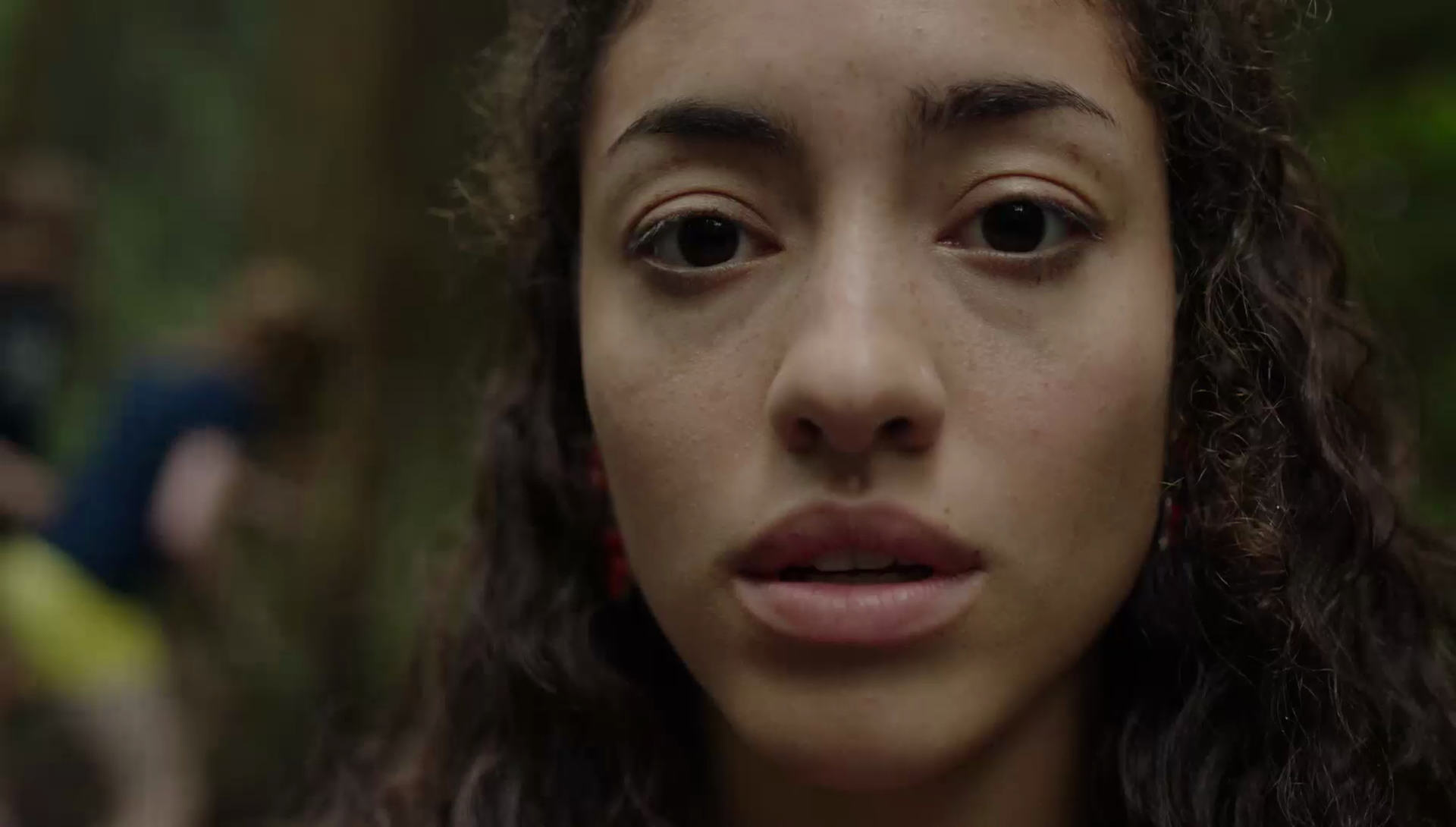 Amy approaches Jessie and thanks her for saving her life. She also encourages Jessie to act on her feelings for Deputy Sykes. Joel points out that there is an eclipse taking place and all the campers gather round to watch it. Suddenly the place goes dark and Jessie is alone on the beach. Cricket appears behind her and tells Jessie not to look around no matter what she hears or feels. Cricket tells her to put Holyoke's bones in the lake before sundown or everyone will die. She says that the others will tell her it's a trick but it's the only way to end the awakening. Then the light comes back and all the counselors and campers reappear. They don't seem to have seen anything strange. Later, Jessie is playing blind man's bluff with Amy and the campers when she hears whispering. Amy asks her what's wrong and Jessie confesses what she saw during the eclipse. Amy points out that Cricket would have been more likely to contact Blair with a special message. She insists that it must have been Holyoke playing tricks on them.

Deputy Sykes is still on the case!

In a flashback, Jessie is preparing for work when her mom appears in a revealing black dress. She tells Jessie that the dress is a gift for her college interview. Jessie reminds her mother that she's supposed to be driving her to the interview the next day and her mom assures her she will be ready. Back in the present, Alex tells Amy that he can still show her around sometime before they leave. When he walks away Amy tells Joel about Jessie's vision. They both believe that Holyoke is using Cricket's memory to trick Jessie. Meanwhile, Deputy Sykes is talking to Jessie about his father's notes. He says that the eclipse is a sign that a demon has been awoken inside a vessel. He believes that Amy has been possessed. Jessie says she knows a way to stop everything without killing Amy.

Deb remembers something suspicious from her time as a counselor.

In a flashback, we see Jessie waiting for her mom to drive her to the college interview. When her mom doesn't show up she goes to the interview by herself. The college representative is about to leave but Jessie convinces him to give her ten minutes. In the present day, Jessie explains her plan to throw Holyoke's skeleton in the lake. Deputy Sykes is skeptical but seems to trust her instincts. He says that the police found a skeleton in Damon's car. Deb interrupts their conversation and is suspicious of Deputy Sykes' presence at camp. She also mentions that there was an eclipse back when she was a counselor that she had forgotten about and the memory has made her a bit uneasy. When she leaves Jessie tells Deputy Sykes that she can steal the skeleton from the morgue if he creates a distraction.

Joel has a plan. 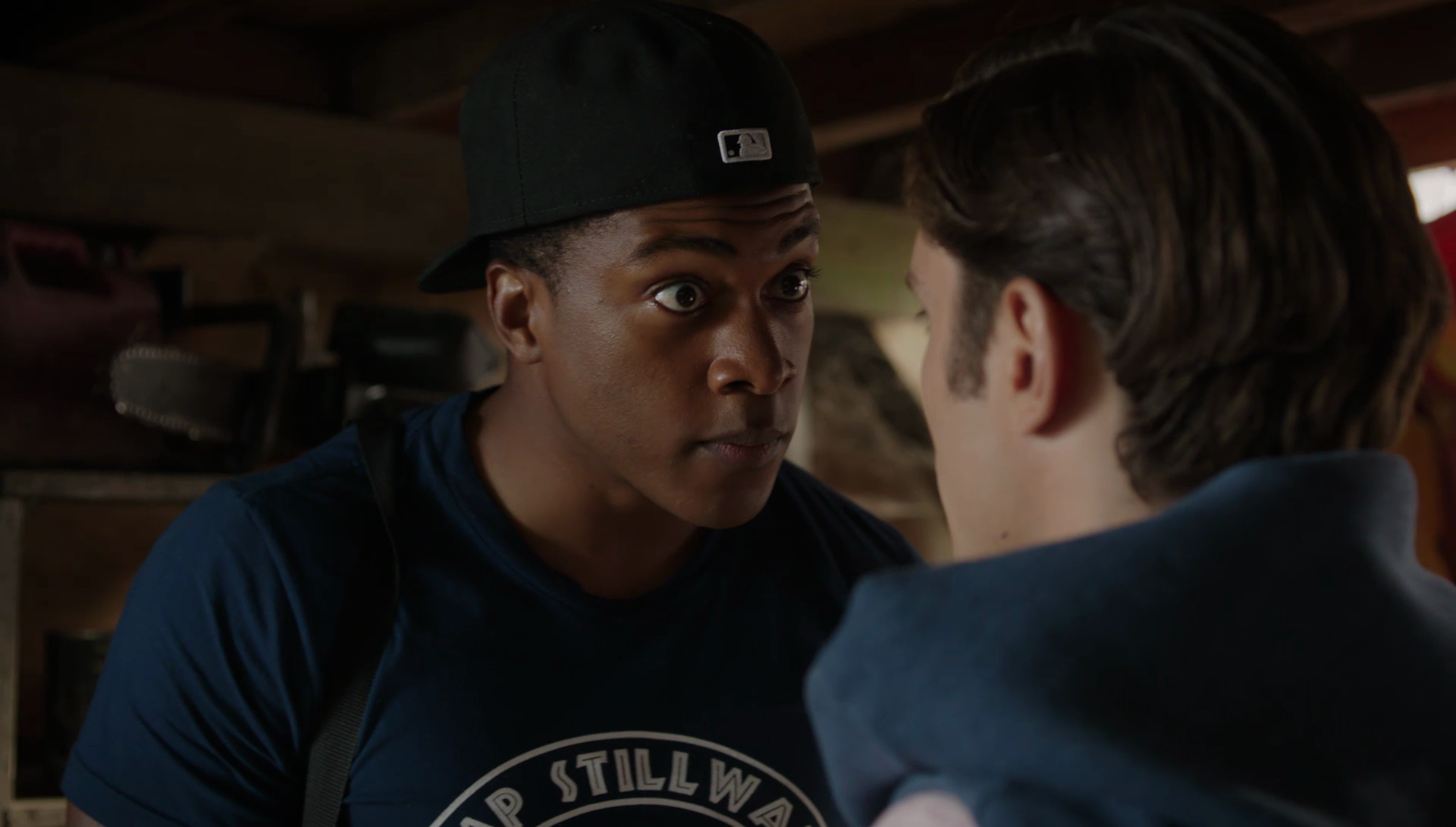 Alex catches Joel stealing lighter fluid from the storage cabin. Joel says that he has to burn down Holyoke's cabin to stop him from doing any more harm to the counselors. He goes to the cabin and starts pouring the lighter fluid until the door creaks open. When he steps inside the door shuts behind him. Meanwhile, Jessie is in the morgue looking for Holyoke's skeleton. She opens several drawers with dead bodies in them and thinks she hears something. Just as she finds the skeleton she sees Damon's body standing in front of her. He tells her that she can't stop what's coming, but she also hears Cricket's voice telling her that he is trying to trick her. Jessie grabs the skeleton and runs. 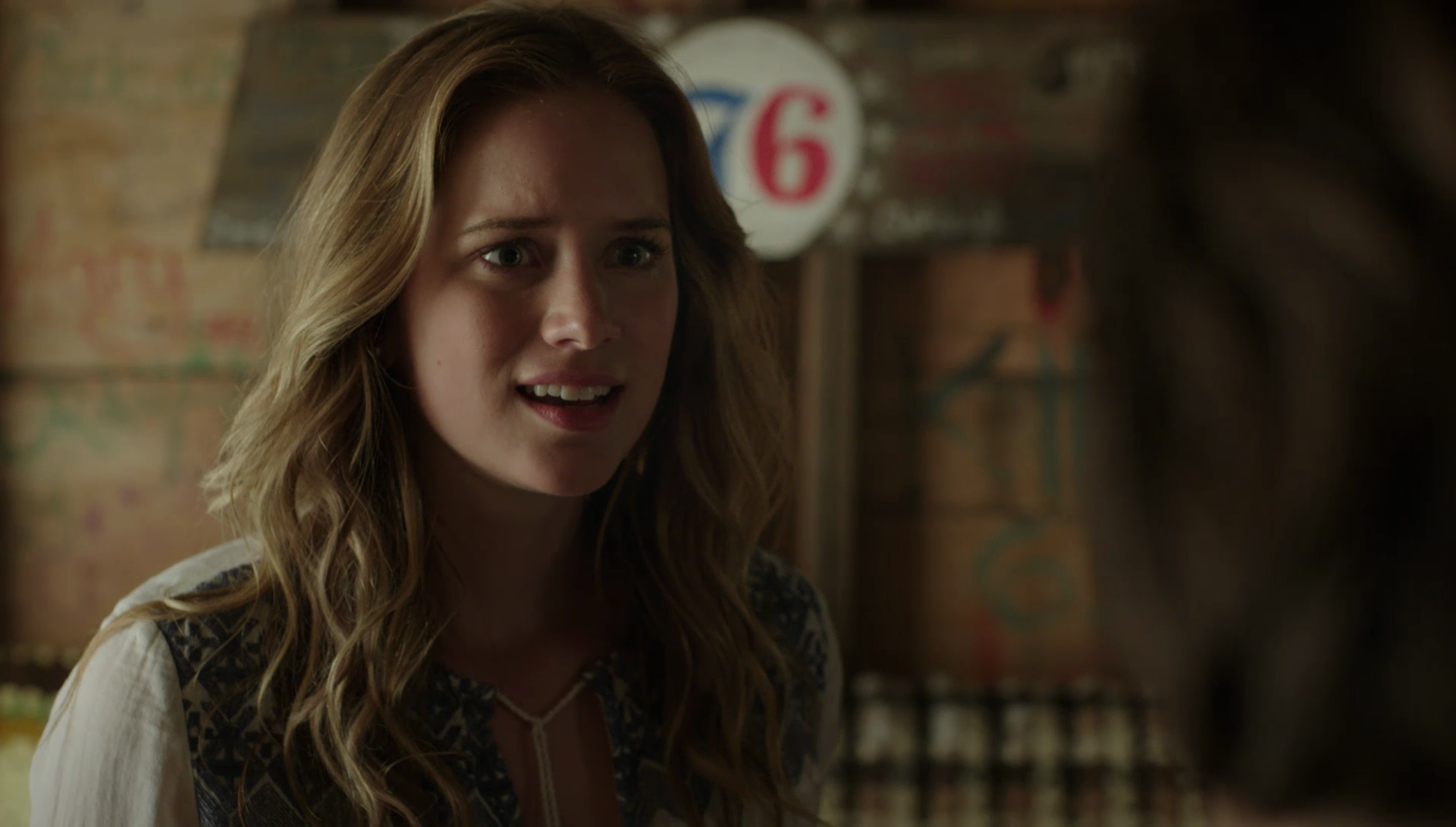 Jessie hides Holyoke's skeleton just as Joel bursts into her room. He shows her a book he found in Holyoke's cabin that says if she throws the skeleton in the water it will awaken the demon. Jessie explains that the demon may have already been awoken. Deputy Sykes tells Joel of their suspicions about Amy being the vessel. Joel is skeptical but agrees to try some tests to prove that Amy is not possessed. They bring Amy into one of the cabins and give her a necklace with a religious cross on the end of it. As they are watching her reaction Alex bursts in and tells Amy what they're trying to do. She is very upset and runs out of the room. Deb watches the counselors through the cabin window.

In a flashback, Jessie comes home to find her mom very apologetic about not driving her to her college interview. Jessie forgives her mother and tells her that she has been accepted by the university. They celebrate and decide to go out. Back in the present, Jessie is trying to decide what to do with Holyoke's skeleton. She has a vision of Cricket again telling her not to turn around. Jessie is suspicious so she looks back at the lake and sees a terrifying demonic figure. Cricket tells her this is what is coming. The vision disappears and Jessie is very confused about what needs to be done. Drew sees her sitting alone and tells Jessie that he trusts her and she should listen to the voice in her head. Meanwhile, Amy thanks Alex for standing up for her and asks if he will show her Eagle Creek. Deb interrupts their conversation to ask why Deputy Sykes is still hanging around the camp. She admits that she has started to remember some strange things that happened back when she was a counselor. Amy points out that they've all seen strange things but they can choose what to remember from this summer.

Joel and Jessie find out the truth! 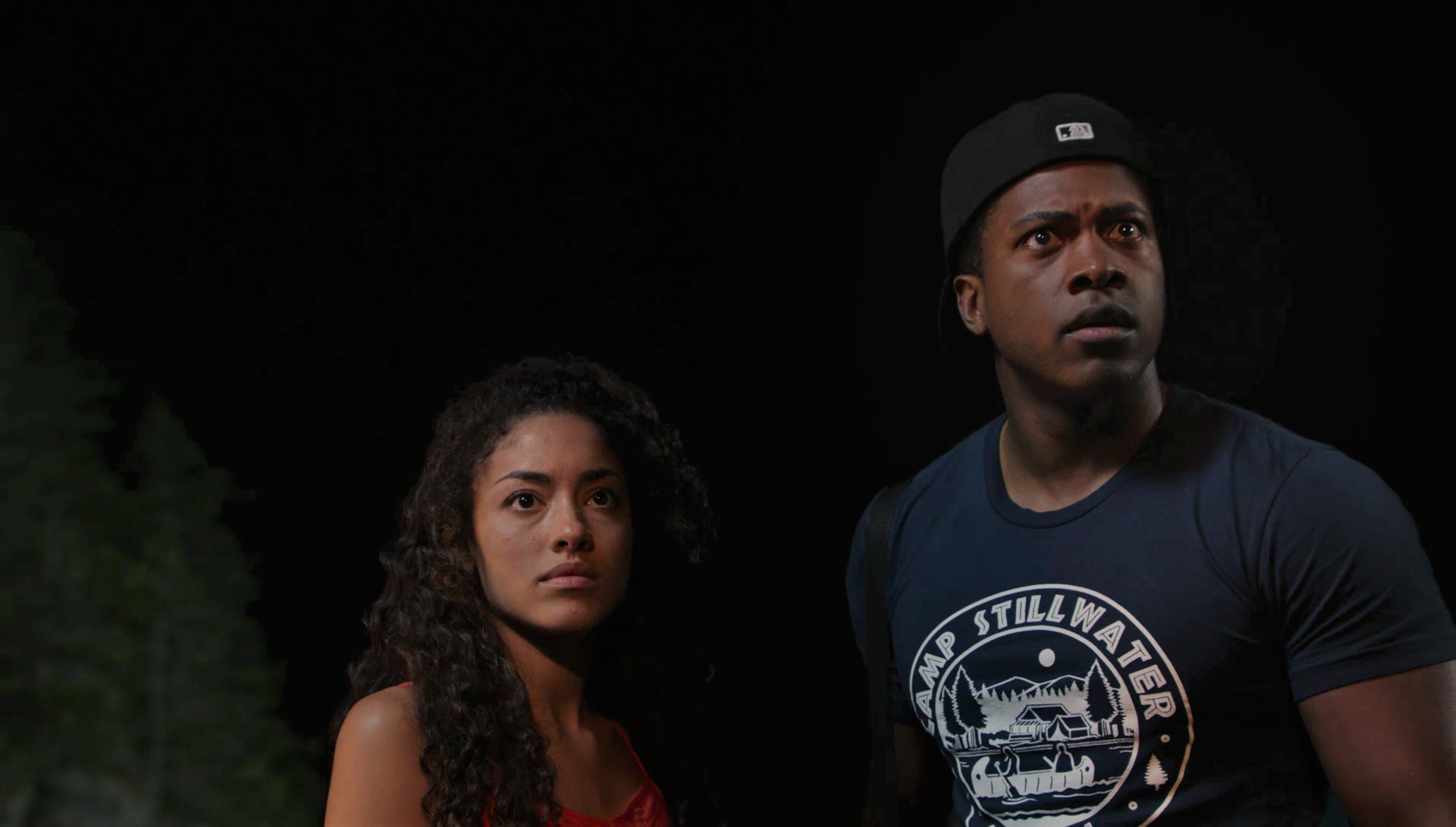 Joel is filming the lake when Jessie runs past him with Holyoke's bones. He tries to stop her from throwing them in the lake but Deputy Sykes distracts him while Jessie tosses them into the water. Suddenly the world grows dark and Jessie is alone with Joel beside the lake. It is night time and there are flaming torches around them. People in white robes walk towards the lake but don't seem to see Jessie and Joel. Then Holyoke appears and tells the white-robed people not to be afraid as they step into the water. Jessie and Joel have been transported back to 1871, to the moment that we first met Holyoke in Episode 1. Suddenly people in satanic masks appear and start to drown Holyoke's followers. He tells them to stop but one of the masked figures hits him and says that the militia will arrive soon and will blame Holyoke for the people being drowned. After all of Holyoke's followers have been drowned, Jessie and Joel go looking for answers. They find Holyoke playing the piano in his cabin. They are surprised when Holyoke turns around and tells them that he needs them to help him get rid of the demon inside of Amy. He warns them not to harm Amy as this will only empower the demon, instead they need to bring her to his cabin. The vision ends as the militia arrive and take Holyoke away.

The counselors are worried about Amy. 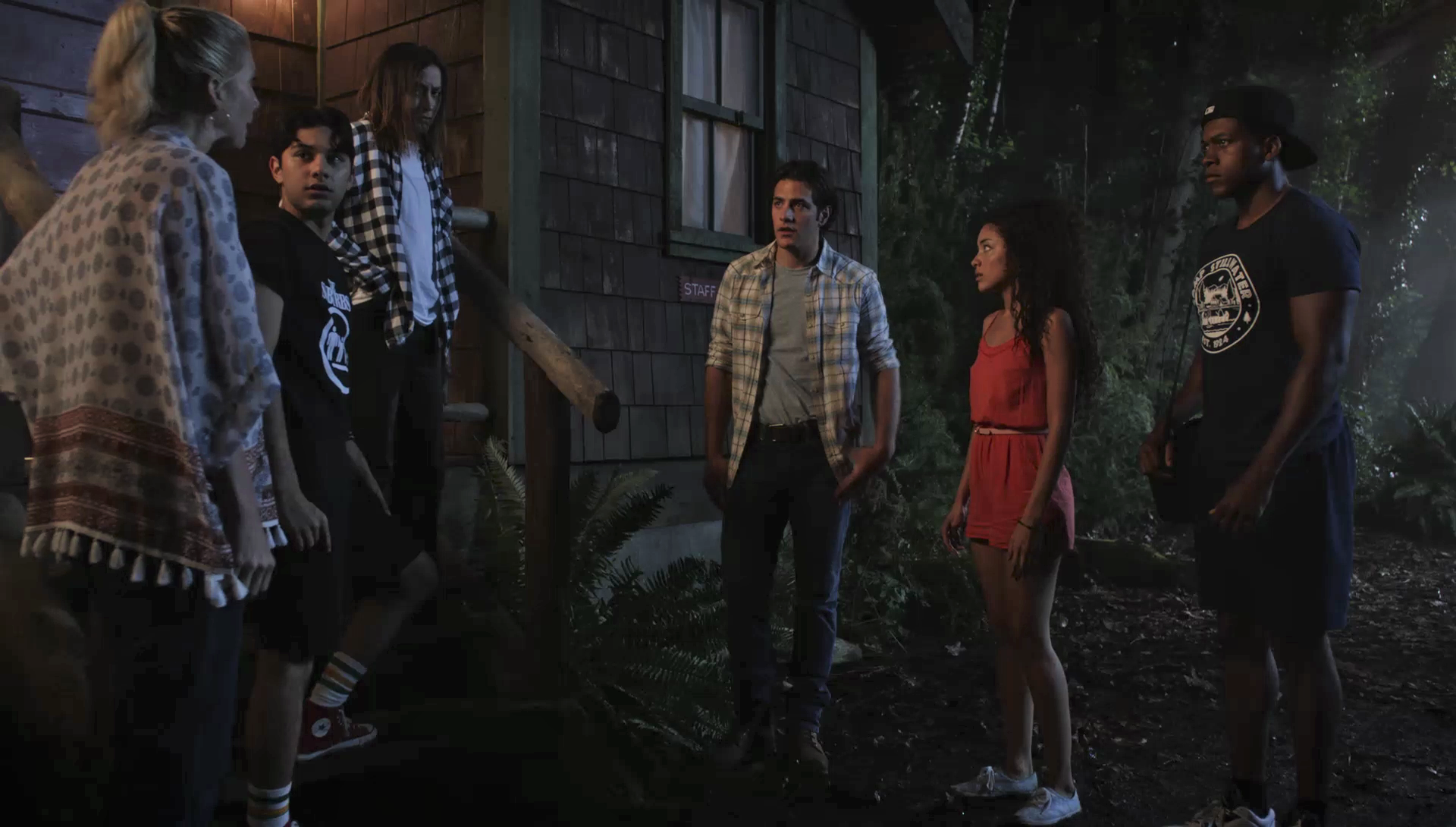 Back in the present day, Deputy Sykes asks Jessie and Joel what happened. He says they appeared to be in some kind of trance. They tell him that Holyoke is actually a good man and might be the only one who can help them stop the demon. They confer with Blair and Drew trying to come up with a plan to stop Amy. Deb finds them and demands to be told what is going on. When they share their suspicions Deb insists she come with them to talk to Amy at Eagle Creek. Deputy Sykes realizes that Eagle Creek was the fifth point on the map. This means that someone could die there.

Jessie's mom gets her in trouble.

Alex is at Eagle Creek with Amy. He remembers that he never got the chance to go star-gazing with Cricket and seems upset. Amy leans over and they start to make out on the ground. As they roll over, Alex drops his penknife on the ground and Amy hides it in her pocket. In a flashback, Jessie and her mom are leaving a club. Her mom is drunk and is angry at Jessie for leaving her to go to college. Jessie is furious that her mom isn't being supportive of her dreams. Jessie's mom gets into the driver's seat, even though she's drunk, and then crashes into another car. Her mom insists they switch seats as she has priors and could go to jail. Jessie is worried about not getting into college if she gets a DUI but her mom will not take no for an answer.

Amy is not what she seems!

Back at camp, Amy and Alex are interrupted by the other counselors. They tell Amy to come with them so that they can help her. She tells them they already have and holds the penknife up to Alex's neck. Joel tells her to put the knife down. He insists that this isn't the real her and she doesn't want to do this. Amy moves the knife and Alex runs away. Joel approaches her and explains that Holyoke told them to save her. She lunges at Joel and stabs him in the neck. Then she shows them the cross burned into her skin from where she held Jessie's necklace during the demon test. She looks really pleased that she managed to trick the others so effectively. As Amy comes towards them Deputy Sykes shoots her in the chest. She falls down but then rises up again and is grabbed from behind by Holyoke. He takes her away and Jessie leads the others after him. Alex stops to cover Joel's dead body and pick up Amy's water canteen off the ground. At Holyoke's cabin, Amy is screaming while tied to a chair. Holyoke turns to Jessie, Alex and Deputy Sykes and tells them it is time to begin.

What was your favorite part of Episode 8? We'd love to hear from you. 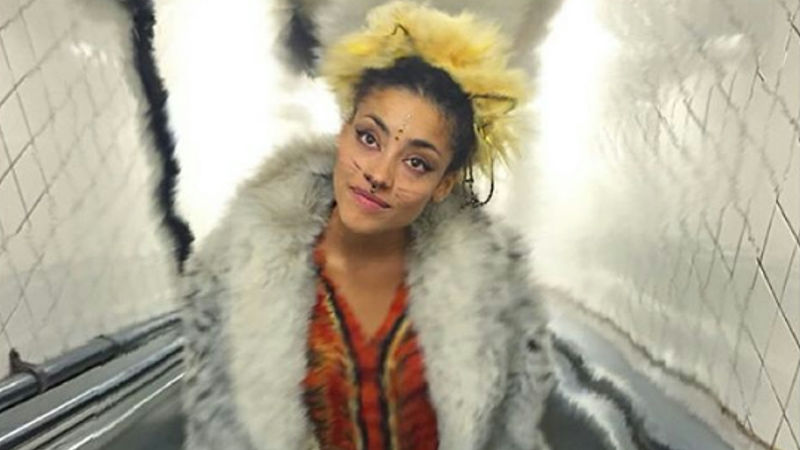 Happy Birthday To Paulina Singer: The Wonderful Lady Who Gives Us Jessie! 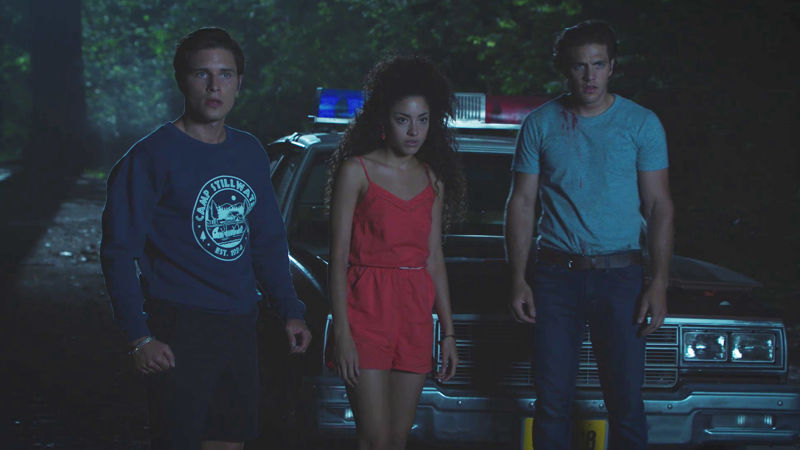