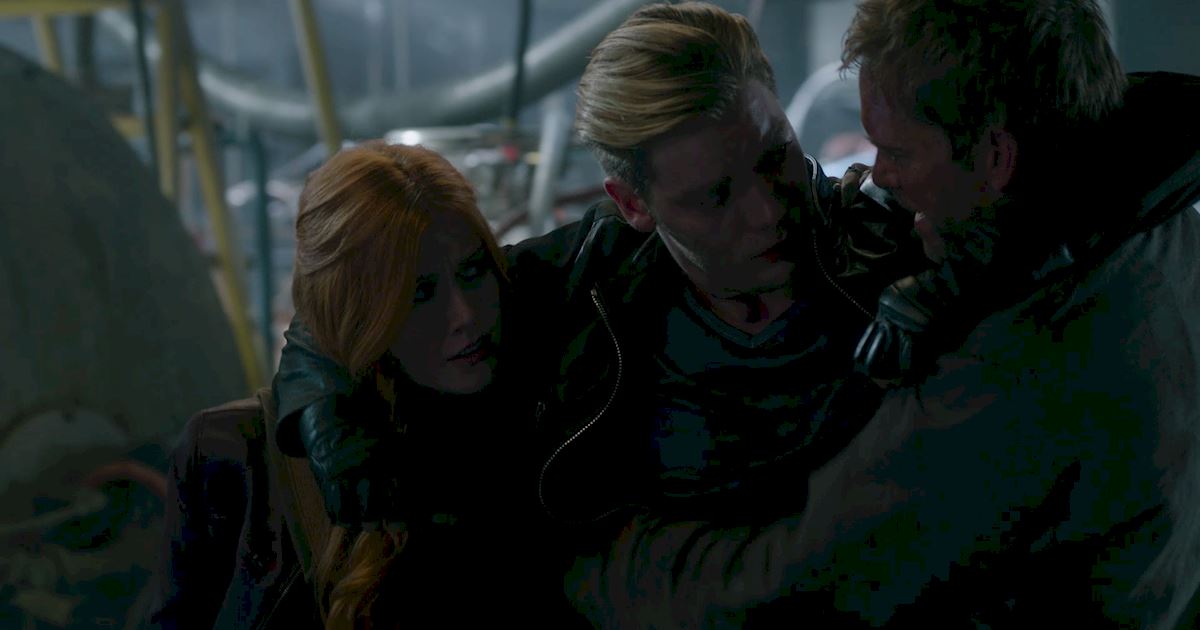 Clary and Jace have just discovered Michael Wayland in a locker at Valentine's lair. Jace is shocked and collapses from the demon venom in his system. Michael helps Clary carry Jace to Valentine's portal so that they can get help. He explains that everyone thought he was dead but Valentine actually locked him up for ten years. As they talk about the first time they fought demons together when Jace was only eight years old, Jace realizes that this isn't some kind of trick - this is his father.

Izzy is in serious trouble! 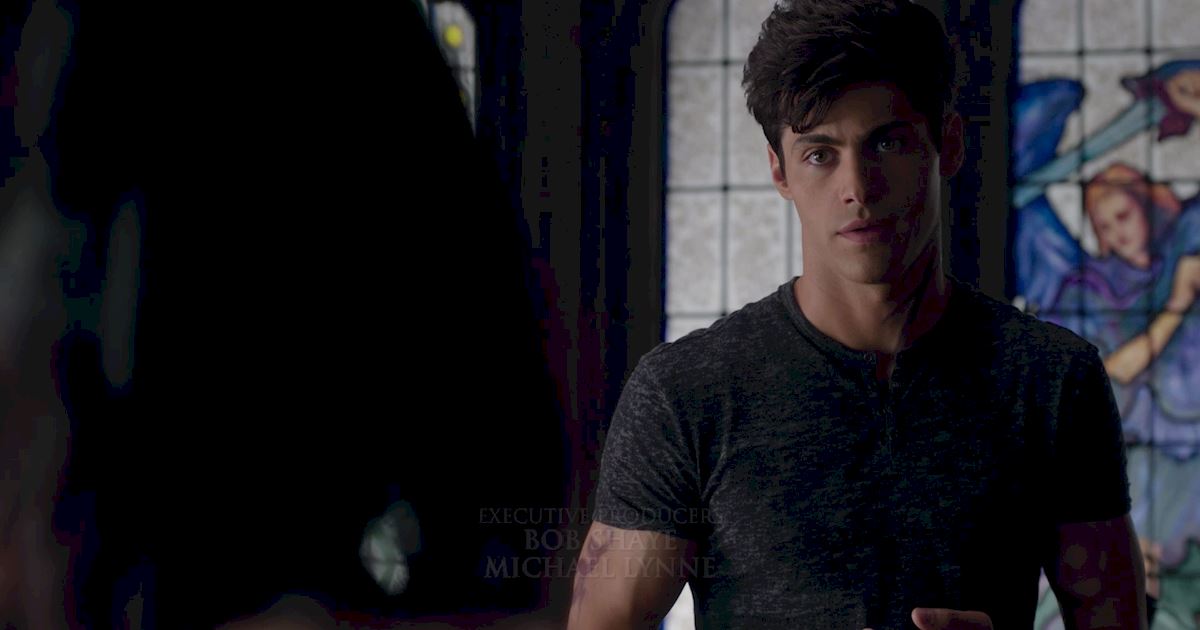 Meanwhile, Isabelle is still under house arrest until a trial can be held. Alec suggests that they can get some assistance from Lydia but Izzy doesn't trust her. Alec tries to explain that Lydia had no choice but to arrest Izzy. It is her job to uphold the law. Izzy insists that everyone has a choice. Alec suggests that they might be able to delay the trial until Clary and Jace come back with the cup. His top priority is to prevent Izzy from being exiled. 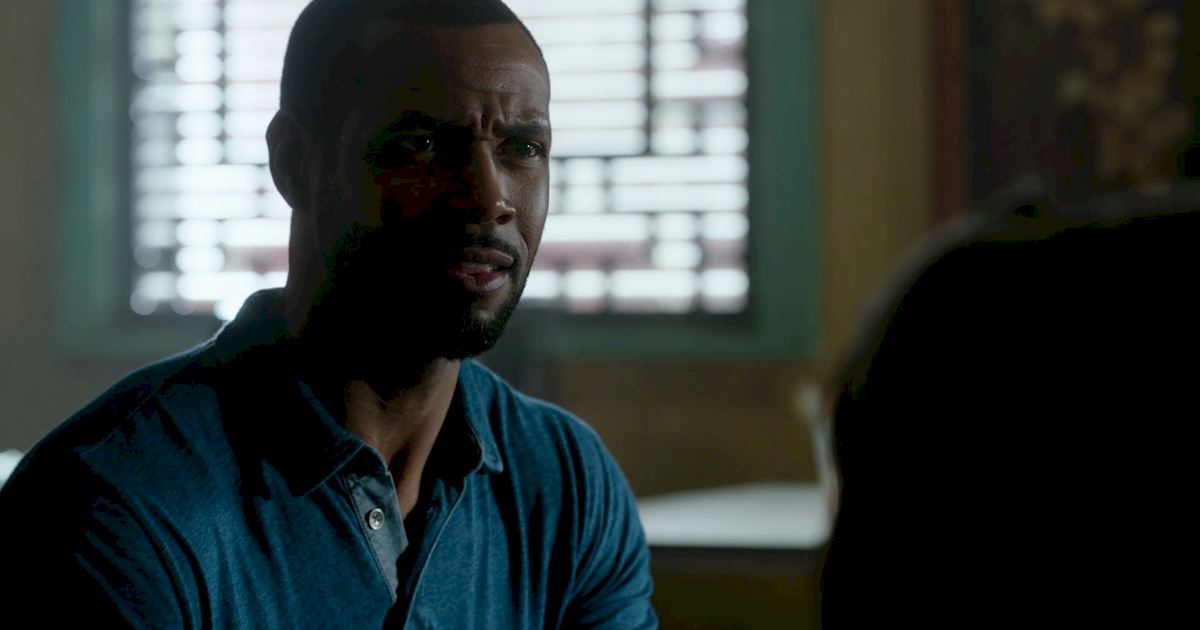 Luke is at the Jade Wolf trying to help Simon adapt to being a Vampire. Simon doesn't think he'll be able to live a normal life but Luke believes it is possible if Simon can control his impulses. Clary and Michael arrive supporting a weakened Jace between them. Luke is shocked to see that Michael is alive and immediately asks where Jocelyn is. Michael assures him that Valentine would never harm her because he is still in love with Jocelyn. Clary and Simon leave to go get some human blood from Raphael so that Jace can have a blood transfusion. Michael nurses his son and Jace swears to kill Valentine.

Always hide your valuables behind an oil painting! 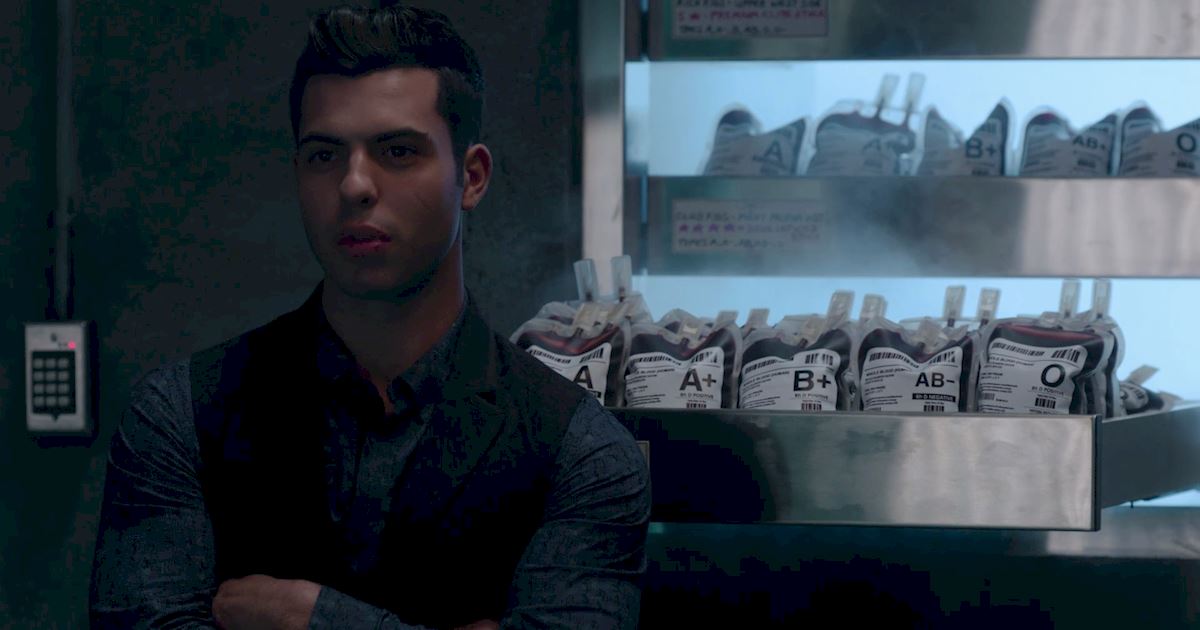 Clary and Simon arrive at Hotel DuMort where Raphael does not seem enthusiastic about helping them. Simon suggests that Camille would definitely have had her own stash of blood somewhere in the hotel. Simon threatens to tell the Clave about all the rules the Vampires have been breaking but Raphael is not alarmed. Then, Simon suggests that the Clave would not be pleased to hear that Raphael is the one who kidnapped a mundane and broke the accords. Raphael reluctantly agrees to give Clary the blood she needs for Jace. But he insists that Simon stay with him as his new advisor.

The High Inquisitor is up in this Institute, y'all! 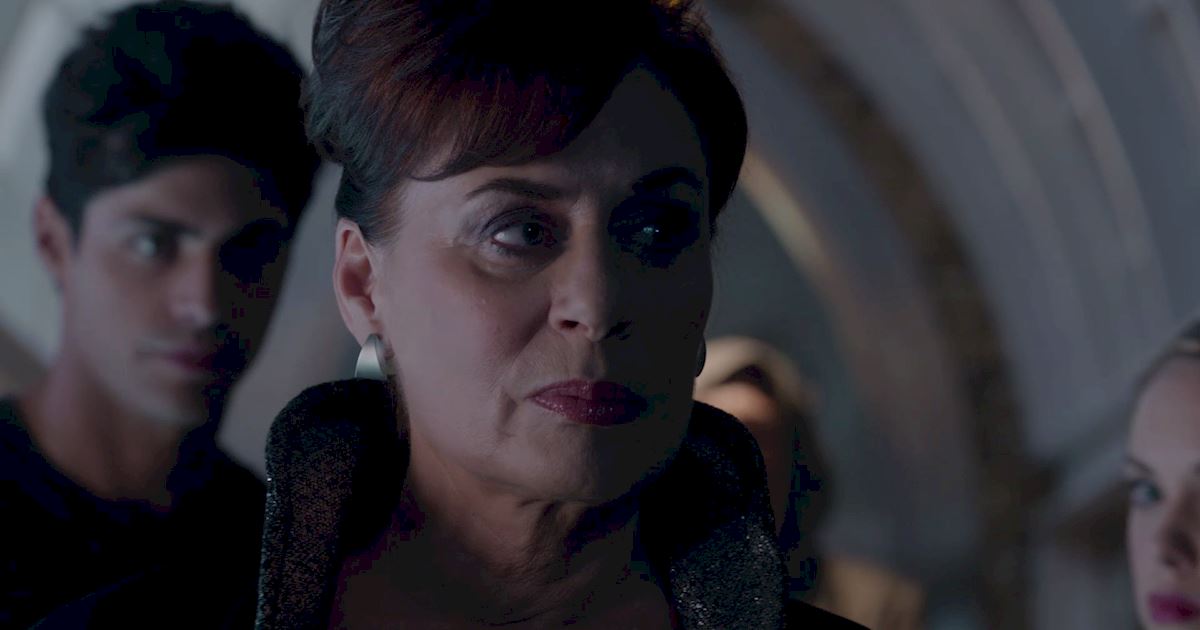 Alec and Lydia are at the Institute talking about the upcoming trial. Alec suggests that Izzy is just a scapegoat because the Clave want to get the cup but Lydia insists it's about upholding the law. Suddenly, the front doors open and the High Inquisitor marches in. She questions Lydia on the upcoming trial and whether her impending nuptials will get in the way of prosecuting her fiancé's sister. After demanding that Lydia be "useful to the Clave", the High Inquisitor announces that Izzy's trial will take place that very evening. 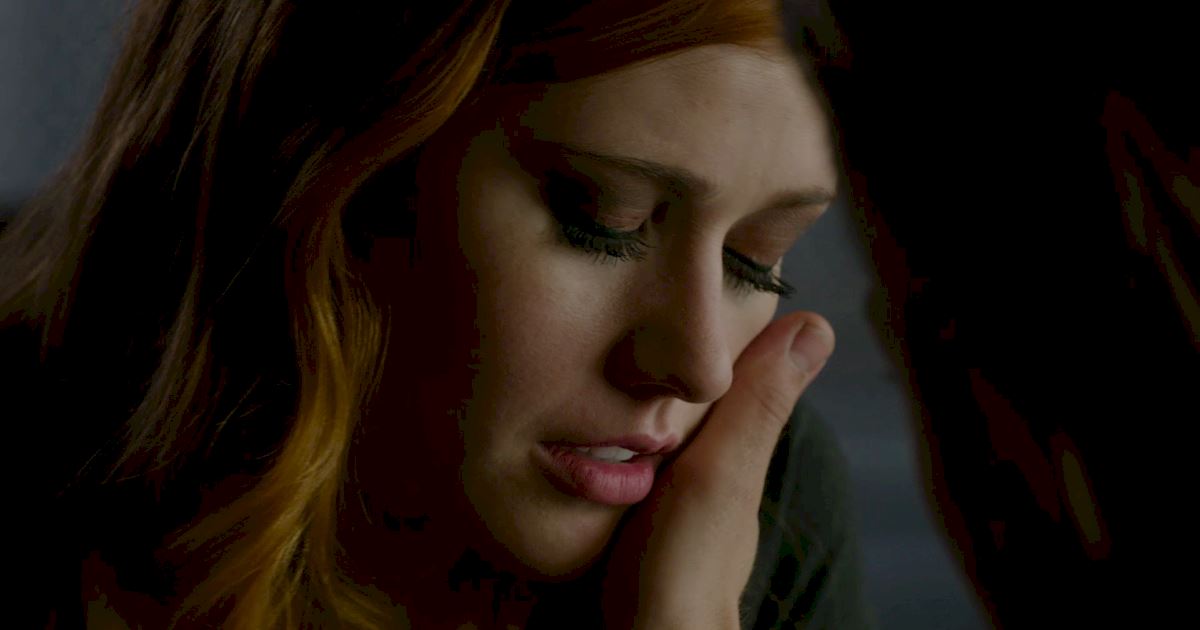 Michael tells Clary that the blood transfusion worked and that Jace is going to be ok. He and Clary talk about Jocelyn. Michael says that Clary is very similar to her mother, and that he knew Jocelyn was pregnant when she ran away from Valentine. He claims that he never revealed that information, even when he was being tortured. Clary is confused as she had thought that Valentine always believed her mother to be dead, but Michael insists that Valentine always had hope that his wife was alive. Clary goes in to see Jace who is feeling much better. They talk about Michael and the alternate dimension, then share an intimate moment. 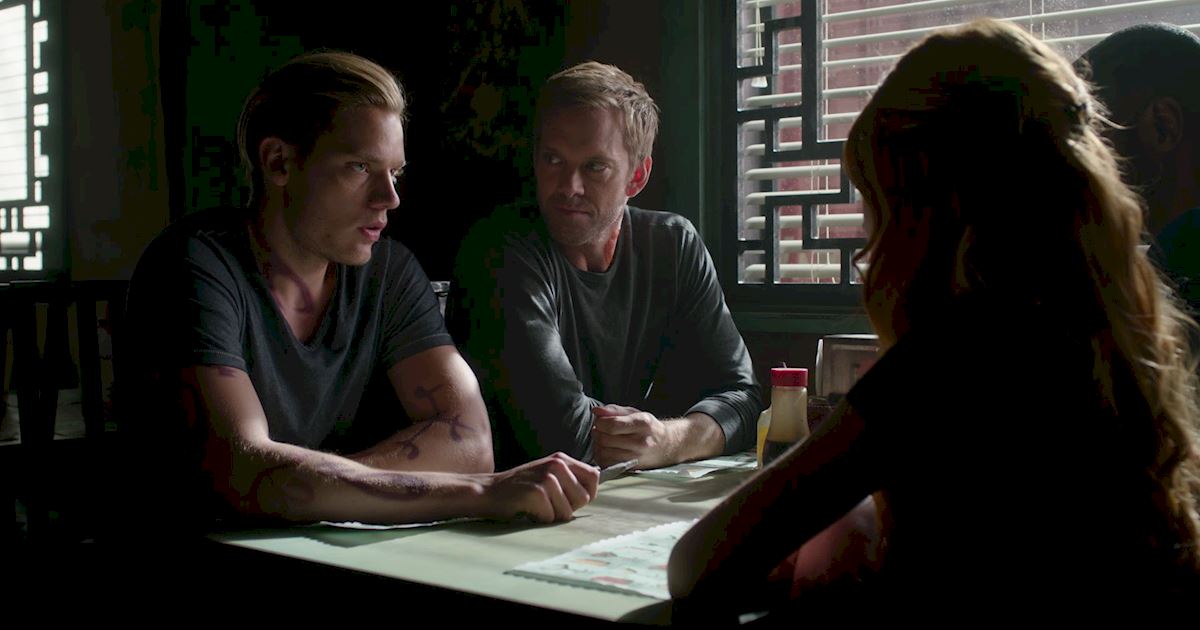 Clary, Luke, Jace, and Michael are all still at The Jade Wolf making plans to find Valentine. Michael says he overheard Valentine and Blackwell talking about setting up an evil base camp at a place called Renwick's. Luke explains that it is an abandoned small pox hospital on the East River. Jace wants to go check it out but Clary insists that he stay behind and recuperate. She and Luke head off to Renwick's and are greeted by a building full of demons. While they are patrolling, Clary tells Luke that she is suspicious of Michael. Some things don't seem to add up.

Magnus, we need your help! 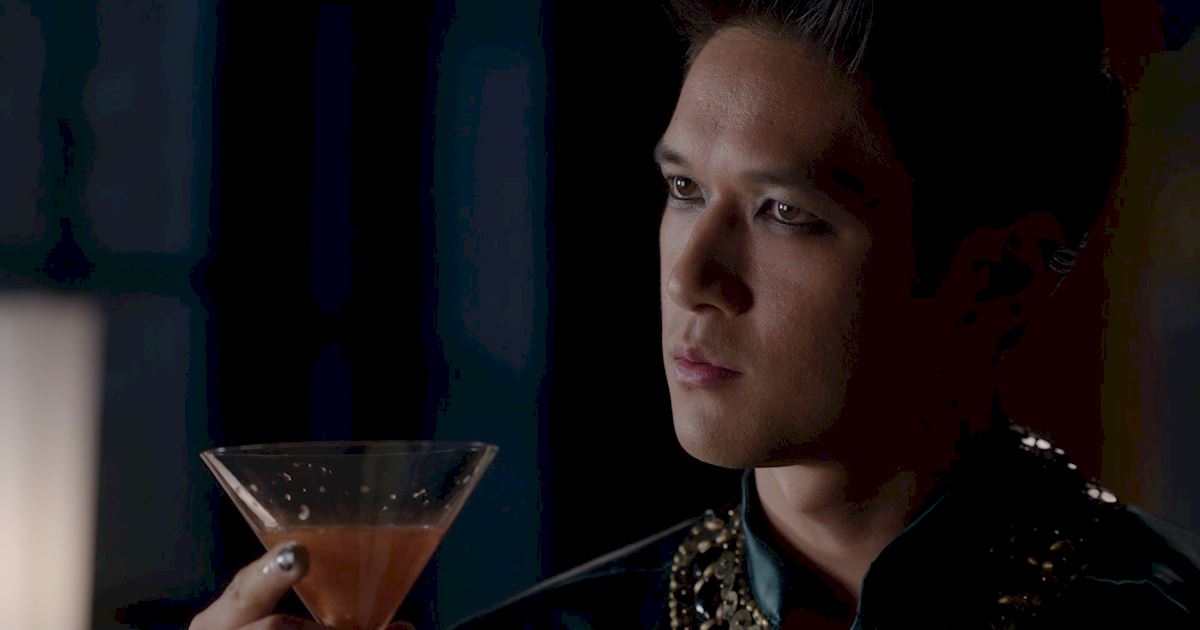 In preparation for the trial, Izzy believes that justice is being sacrificed for law, and claims that she doesn't want to be a part of the Shadowhunter world anymore. Alec is worried about her so he goes to ask Magnus to be her advocate. Magnus is still hurt by Alec's decision to marry Lydia, but he offers to help in exchange for Alec's bow and arrows. He wants Alec to have to sacrifice something to prove how badly he needs Magnus' help. They agree on the trade.

Time for some father-son bonding... 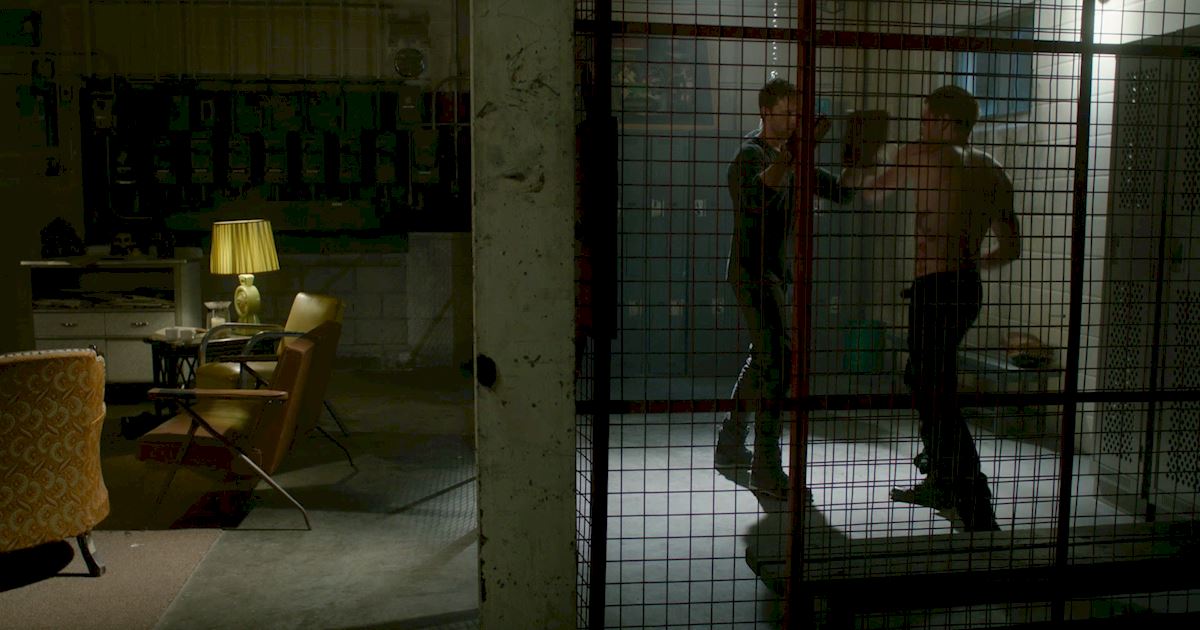 Michael and Jace are sparring back at the Jade Wolf while Clary and Luke are patrolling. Michael keeps landing punches and says that he shouldn't be able to get past Jace's defenses considering he's been locked up for so long. He calls Jace weak, and blames Clary for making him too soft. Clary and Luke arrive back and tell the other two what they have seen at Renwick's. They plan to launch an attack and Clary suggests using the Mortal Cup to control the demons and turn them against Valentine. Michael is concerned that this strategy is exactly what Valentine will be expecting. 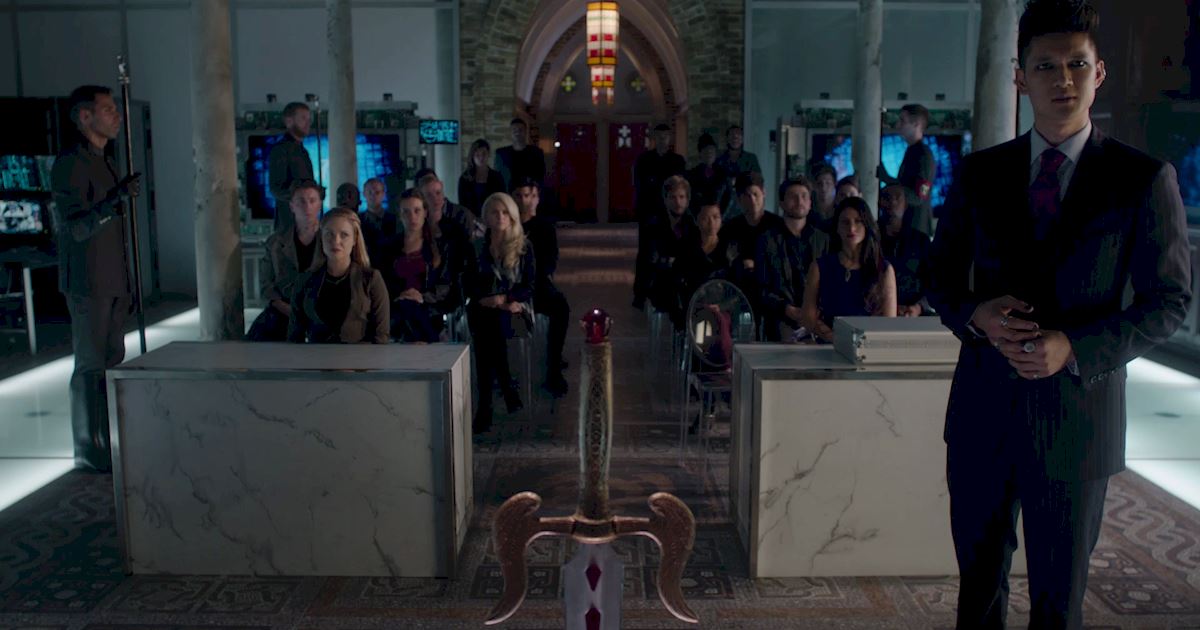 At the Institute, Magnus is being sworn in as Izzy's defense attorney. He claims that Izzy was not working against the interests of the Clave, and that she actually may have prevented a war with the Downworlders. If Meliorn had died, the Seelies would have been furious with the Shadowhunters. The High Inquisitor is not impressed with this approach and insists on a more valid argument. Magnus moves to have the case dismissed because the Clave want the Mortal Cup but Izzy does not have it. 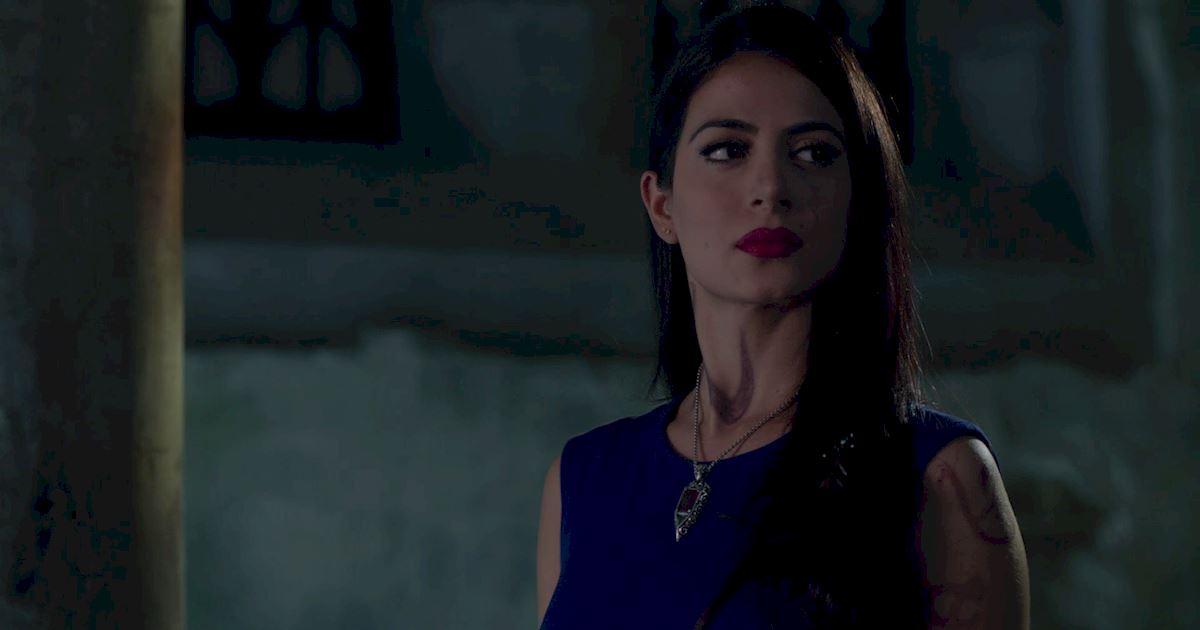 Lydia calls Izzy to the stand for questioning. She asks if anyone else aided Izzy in the rescue attempt but Izzy insists she worked alone. The High Inquisitor warns Izzy that she may have assisted Valentine in getting his hands on the cup and creating an army of rogue Shadowhunters. Izzy gives a speech to everyone at the trial about the dangers of treating Downworlders as though they are inferior. She believes that the way the Clave acts towards Downworlders is very similar to how Valentine treats them. 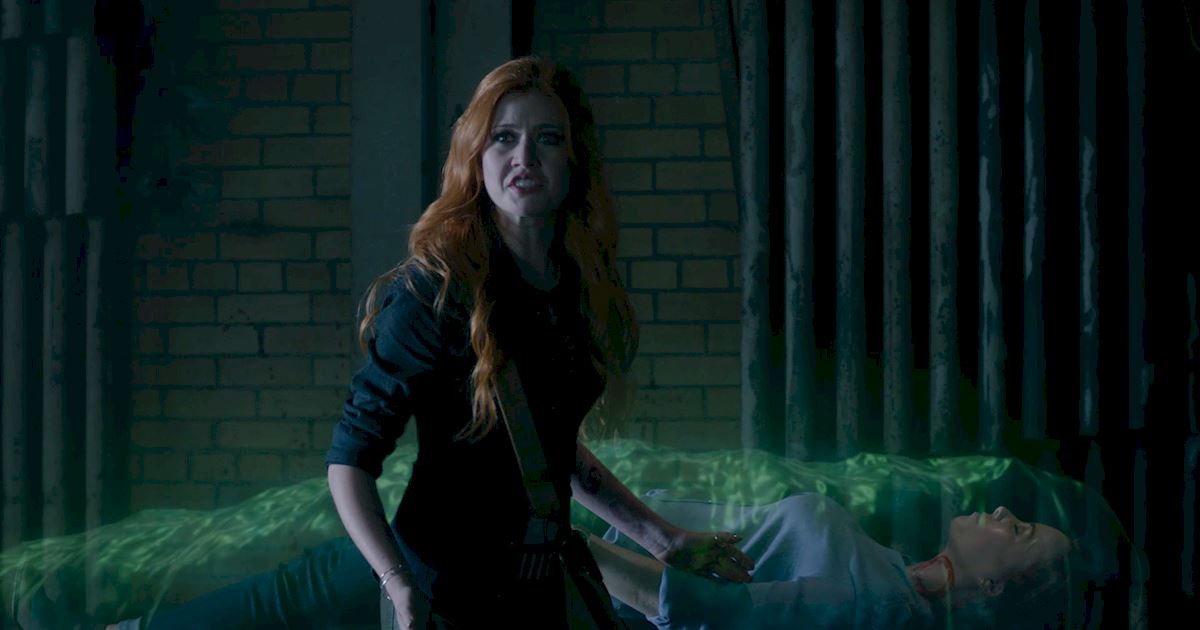 Luke, Michael and Jace approach Renwick's and are immediately attacked by Circle members. While they are fighting, Clary sneaks into the building to look for Jocelyn. She sees her floating unconscious in a back room. Meanwhile, Blackwell taunts Luke into another fight while Michael and Jace run into the building to help Clary. When they find her with Jocelyn they quickly barricade the door as demons are gathering just outside it. 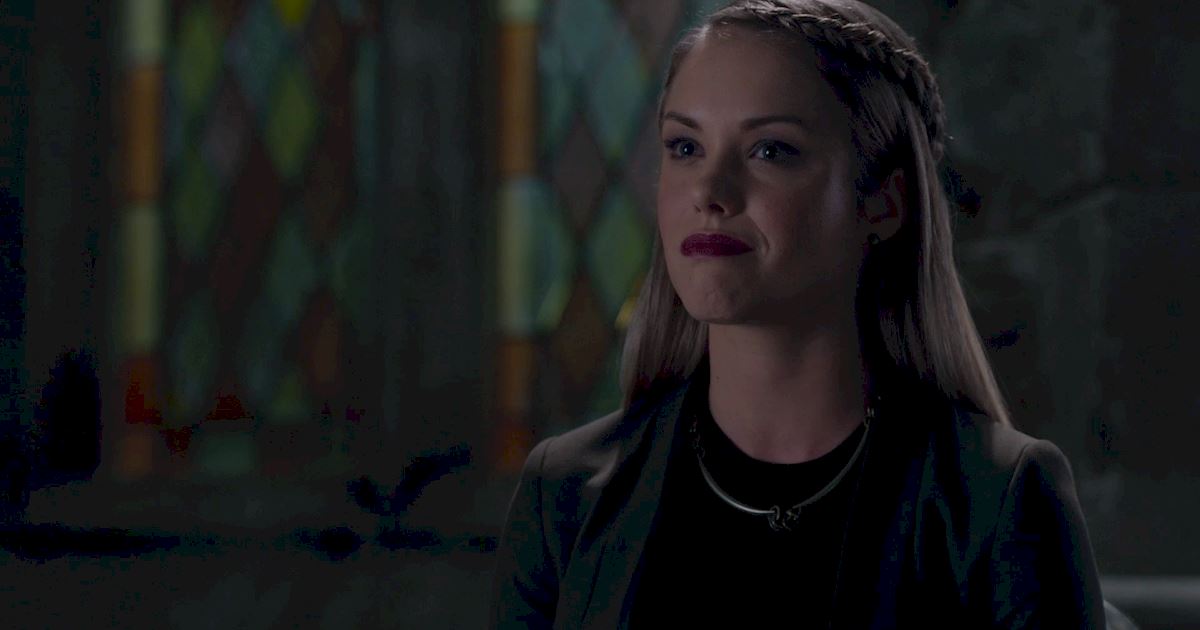 At the Institute, Magnus calls Lydia as a witness. He asks her why she's prosecuting the case and she insists that the law is the law. However, she believes that Izzy acted out of compassion in an attempt to save a seelie life. She talks about justice and loyalty, and then she withdraws the charges against Izzy. Everyone in the courtroom cheers but the High Inquisitor silences them. She admits that the Clave does want the Mortal Cup and says that Izzy will be free only if the cup is handed over to the her within the next 24 hours. 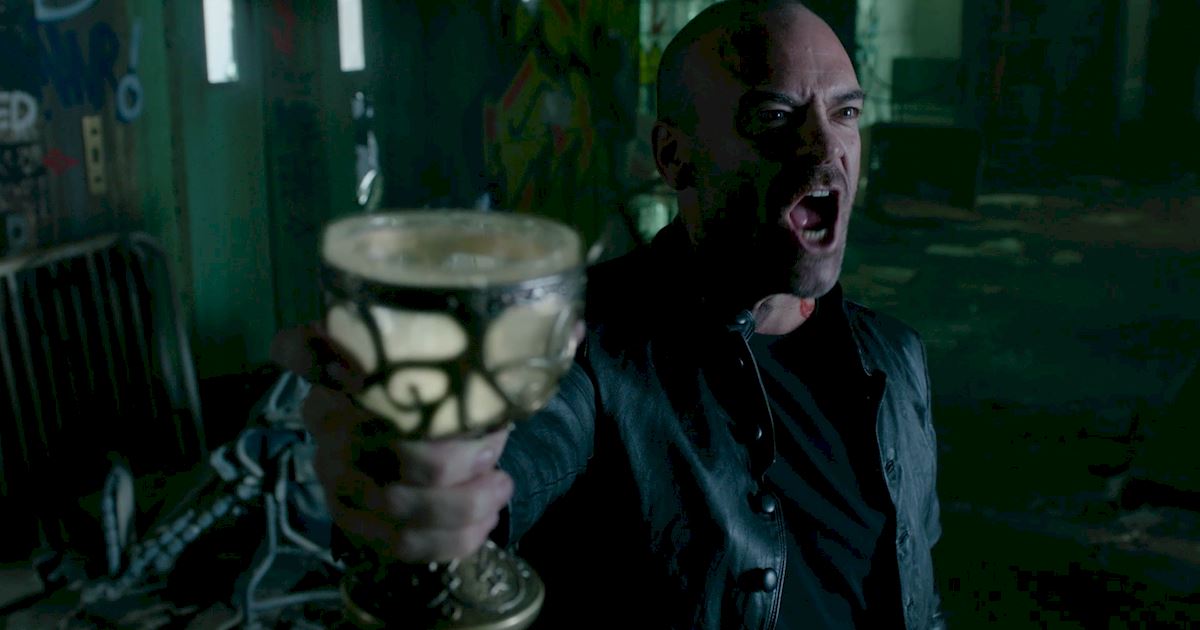 Michael, Clary and Jace are still hiding from the demons. Jace asks Clary to use the Mortal Cup but when she tells the demons to kill Valentine nothing happens. Michael offers to give it a try. As soon as Clary hands him the cup he cuts a rune on his arm and transforms into Valentine. Then he tries to use the cup to get the demons to attack Jace and Clary. Nothing happens. Clary takes out the real Mortal Cup and calls off the demons. She reveals that she actually gave Michael a fake mug because she suspected he was Valentine. 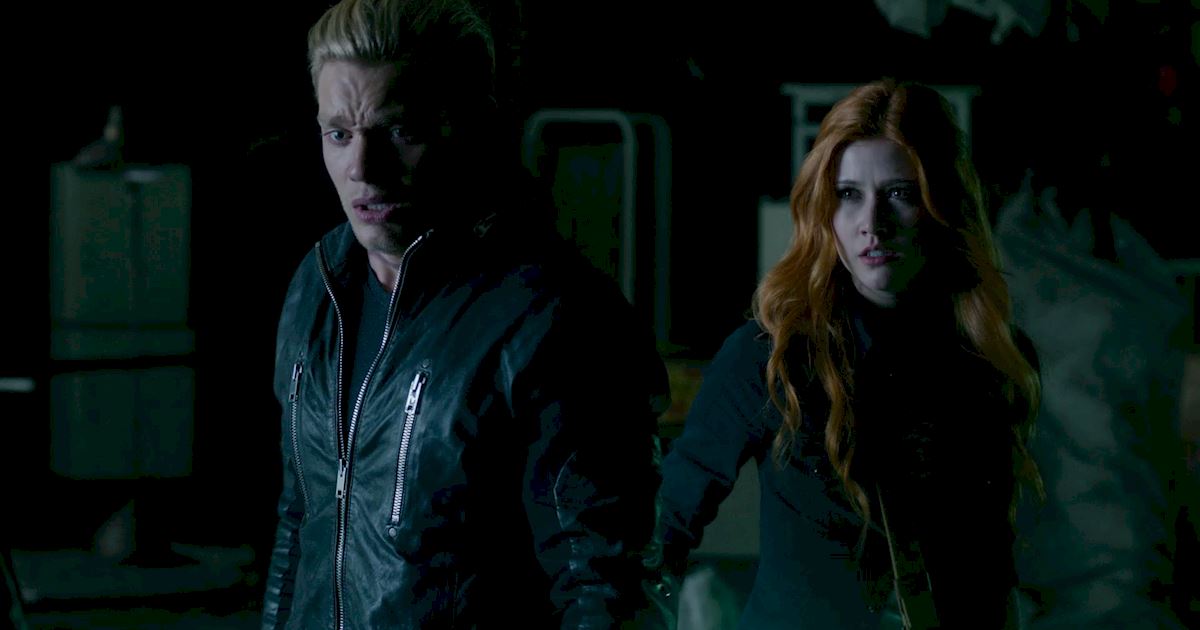 Jace wants to kill Valentine himself. He accuses him of murdering his father Michael. However, Valentine reveals that he actually did raise Jace in the disguise of Michael Wayland. He is Jace's real father, which makes Clace Clary and Jace brother and sister. Valentine makes a portal and wants the whole family to come with him. Jace threatens him but Valentine accuses his son of being weak and unable to murder his own father. Then he escapes through the portal. Luke appears and runs to Jocelyn's side. He tells her he is going to take her home. 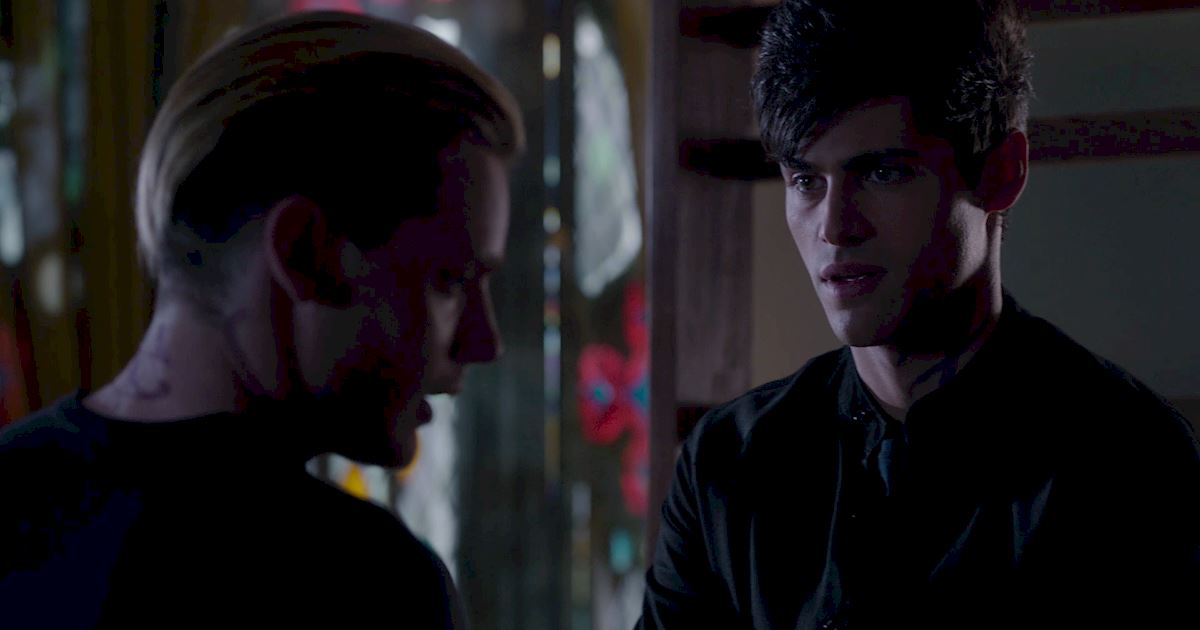 Clary is sitting by her mother's side back at the Institute. Jace and Alec are having a conversation in the doorway. Jace accuses Alec of almost killing him by trying to track his location through their bond. Alec is furious that Jace put Clary and the Mortal Cup ahead of Izzy's freedom and storms out of the room. Jace turns to Clary and asks how she knew Michael was Valentine. She says that he couldn't have known Jocelyn was pregnant when she ran away. Clary didn't tell Jace the truth because she didn't think he'd believe her without proof.

Izzy is cleared of all charges! 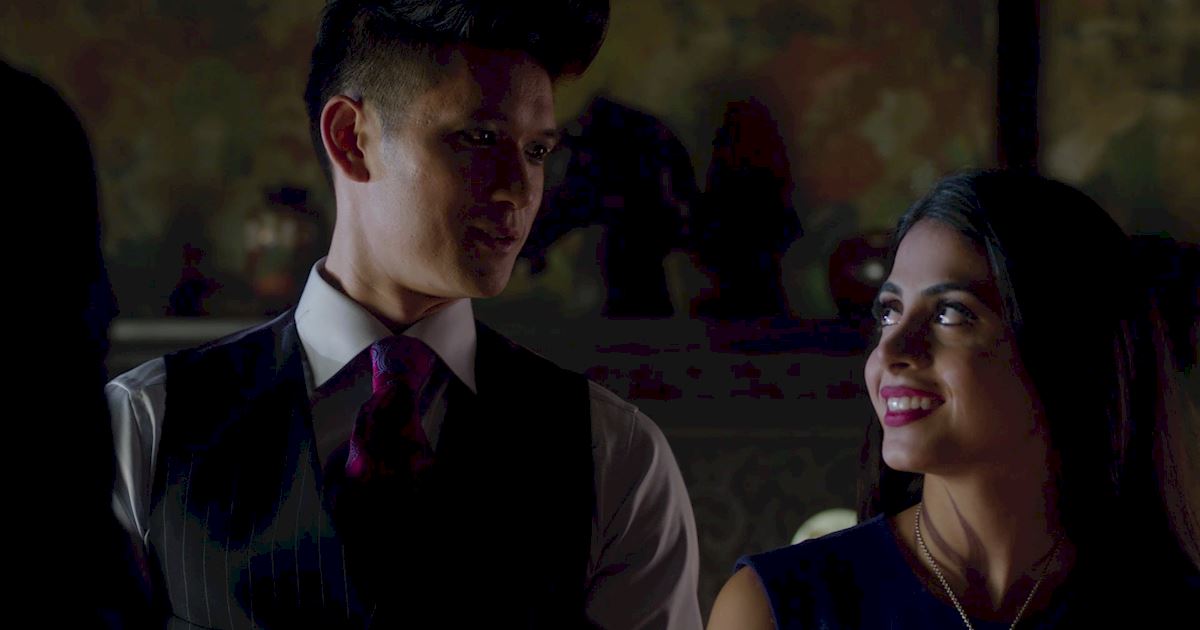 Magnus and Izzy are at the institute. He is apologizing for not winning the trial but Izzy doesn't blame him. Alec arrives and announces that Clary and Jace have returned with the cup so Izzy is free to go. Magnus and Alec leave the room to settle the matter of payment. Alec offers Magnus his bow and arrows but Magnus tells him to keep them. He admits that he likes Lydia but he still doesn't understand why Alec is marrying her. Magnus is worried that both Alec and Lydia will be lonely all their lives.

Simon gets some good news. 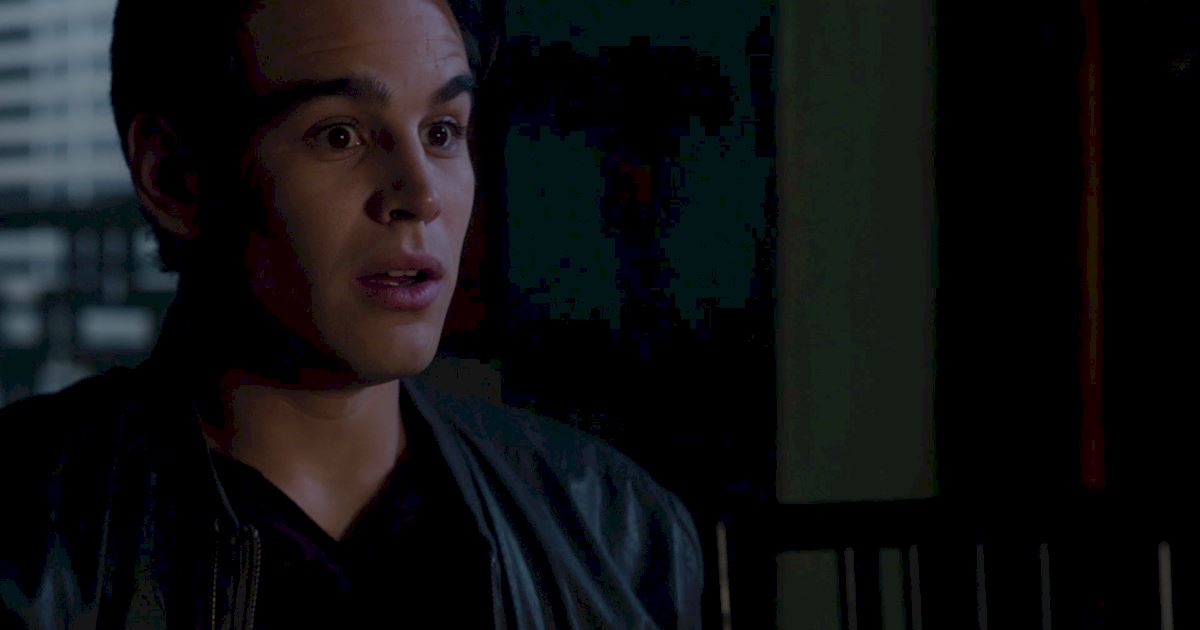 Luke and Simon are at the Jade Wolf talking about the events of the night. Luke talks about finding Jocelyn and how much he loves her. Simon mentions that he thought he'd found the love of his life but she likes another guy. Luke then explains how Valentine revealed that Jace and Clary are siblings. Simon is very pleased because this means that Clary and Jace can't have a romantic relationship. Meanwhile, back at the Institute, Clary and Jace have already started avoiding each other.

We loved episode 11! How did you feel about it?

Let us know in the comments!