If you’ve not seen episode one, may we suggest you go here to find out how to watch before you read the below!

This article contains spoilers for Shadowhunters Episode 101: "The Mortal Cup".

Shadowhunters throws us straight into the Shadow World and introduces demon-slaying siblings Isabelle Lightwood, Alec Lightwood, and Jace Wayland - all dressed to kill and in hot pursuit of their latest target. After showcasing some bad-ass parkour skills, the trio find themselves at Pandemonium, a nightclub renowned for attracting Down Worlders. It’s here that Jace, leather-clad and bad-boy handsome, bumps (quite literally) into Clary Fray, an art student from Brooklyn. After a flash back to hangout hot spot Java Jones, we are introduced to Clary's best friend, Simon Lewis (who also happens to be the epitome of nerd hot) and his band mate, Maureen. 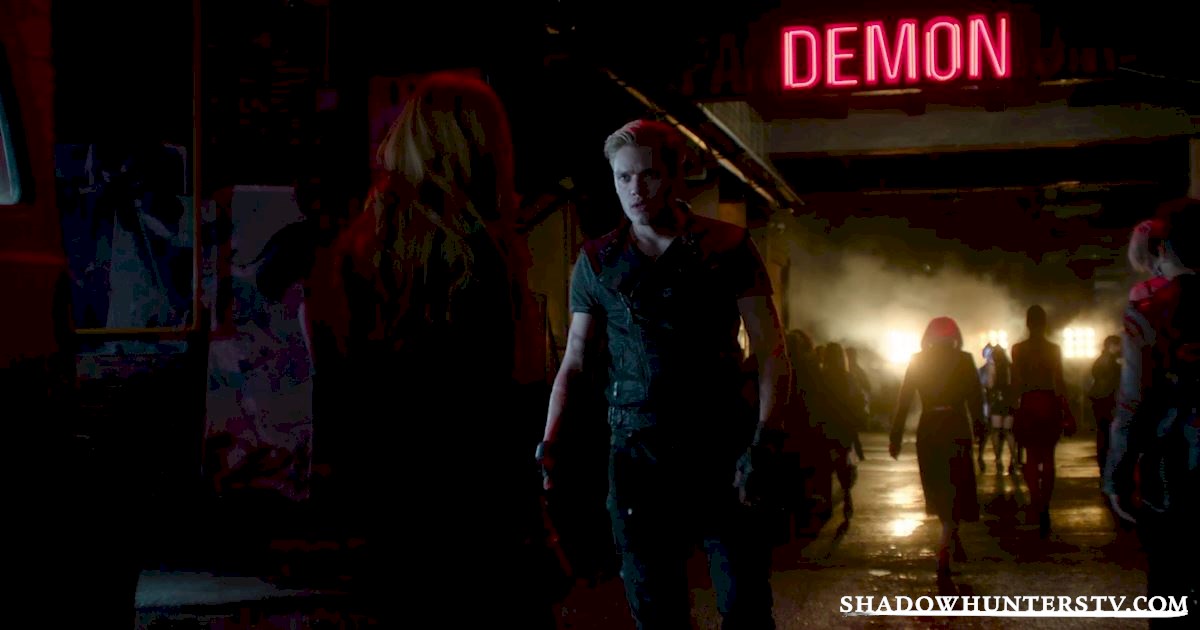 Things take a dark turn at a crime scene, where police detective Luke Garroway (a family friend of the Frays) is investigating a series of demonic murders. Clary heads home and we meet Madame Dorothea and Clary’s mom, Jocelyn, who presents Clary with a family heirloom called a stele for her 18th birthday. Jocelyn's mind wanders back ten years, where a young Clary was perched by a pond. A demon shot out from the water to attack Clary but Jocelyn destroyed it using a glowing seraph blade. And that's when everyone’s favorite warlock makes his debut. Introducing Magnus Bane, the magical mastermind responsible for wiping Clary’s memories. But more on him in a bit. 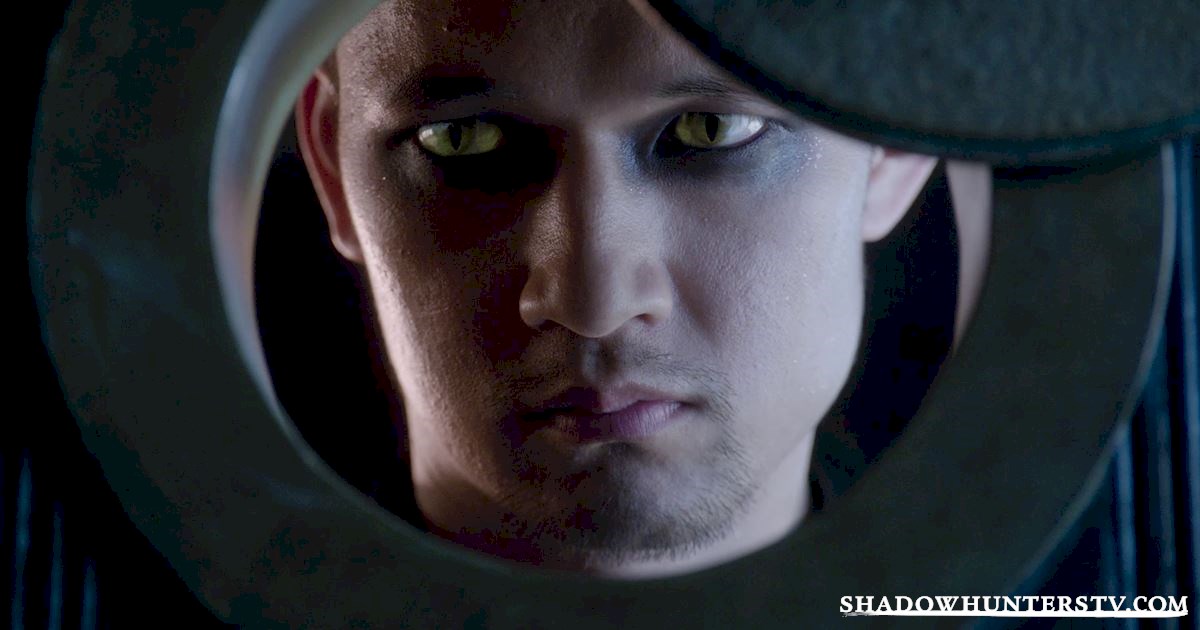 Jace gives the low down on the latest demon dilemma, while back at Java Jones, Simon’s band Champagne Enema make their debut on stage. Afterwards, Clary, Simon and Maureen spray paint Simon’s van with their latest, ingenious band name when Jace bumps into Clary just outside Pandemonium. Weirdly, though, Clary learns that she was the only one who saw this mysterious blond boy and heads inside to find out more. While Izzy, Alec, and Jace make their way through crowds of dancing Down Worlders, where they witness a dodgy-looking transaction between a shape-shifting demon and some shifty looking guys in black suits. 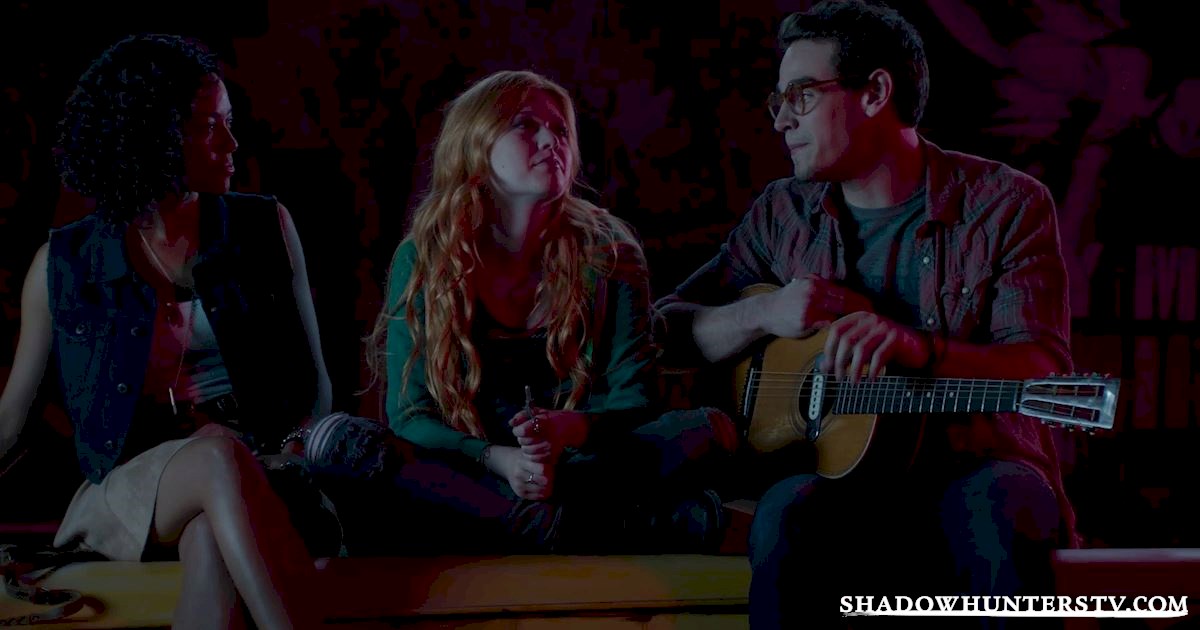 When Clary sees Jace pull a seraph blade on the shape-shifting demon, she intervenes, but is soon confronted with a terrifying demon! With one swing of his seraph blade, Jace destroys the demon, only for several more to appear. Not wanting to miss out on the action, Izzy transforms her serpent bracelet into a deadly electrum whip and she and Alec join the fight. A confused Clary picks up a seraph blade lying unattended on the side. Jace throws the demon into the blade where it vaporises. Clary flees the scene fearing that she has killed someone but the two suited men are hot on her heels. 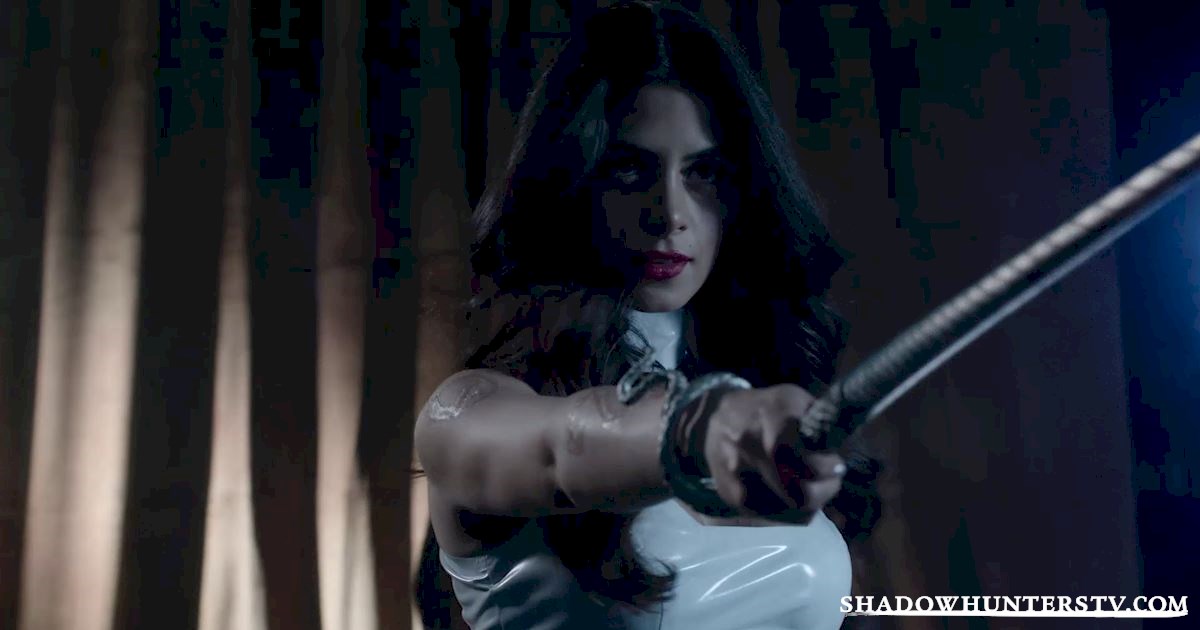 Back at the Fray's apartment, things are really going to pieces. In a rush, Jocelyn reveals that she's been keeping something from Clary. She hands her a necklace and tells her to call Luke while Dorothea passes Jocelyn a vial and opens a portal. Using the portal, Clary is transported to New York Police Department. Downstairs, the suited men who we later learn are Circle members, sneak into Jocelyn’s antique shop and make their way upstairs. Dorothea sees them and begins to run. She bumps into one of the men and is thrown through a window where she falls, presumably to her death. Inside, Jocelyn destroys Clary's bedroom and after attempting to fight off the men now surrounding her, she drinks the contents of the vial and falls unconscious on the ground. 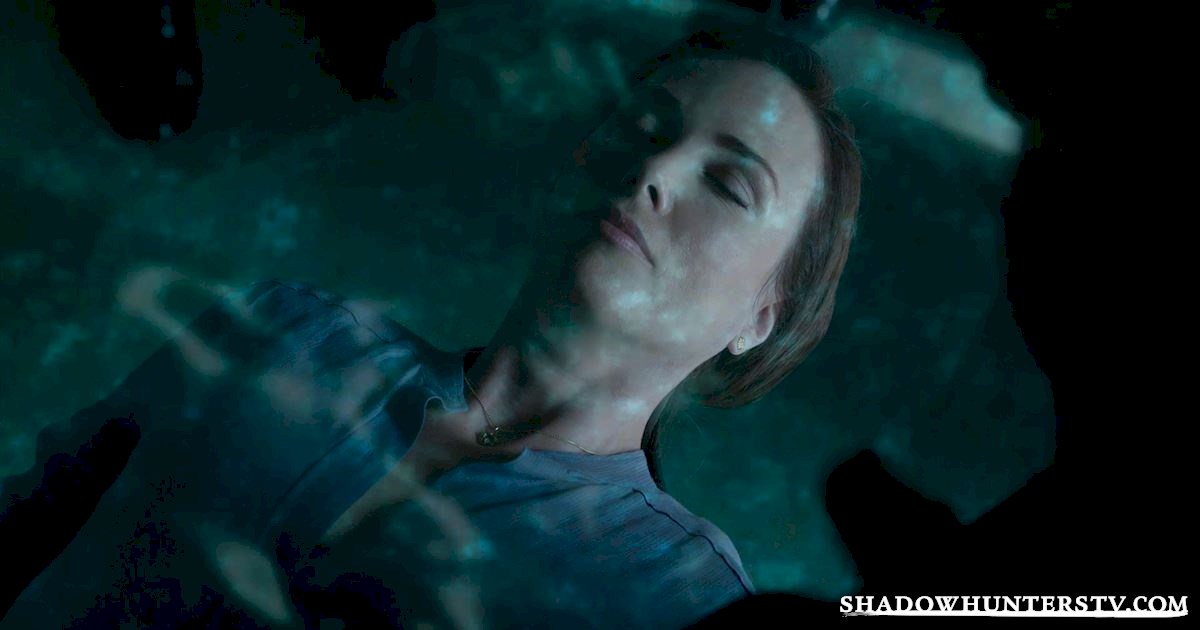 Brace yourselves, we’re about to see the spine-chilling Chernobyl This, gang, is Valentine's lair! The scene opens with Jocelyn floating in a dimly lit room. After one of the circle members speaks disrespectfully about Jocelyn, we learn that she and Valentine have a history.

Meanwhile, Clary heads home to find her apartment destroyed. She makes her way upstairs where she finds Dorothea in the darkness. But something is up, and soon enough Dorothea transforms into a demon and lunges at Clary. The demon strikes Clary across the arm and she falls to the ground. Just when we think that’s it for our leading lady, Jace comes to her rescue, plunging a seraph blade right through the demon’s chest. The demon venom causes Clary to collapse, so Jace scoops her up and carries her to the safety of the Institute. 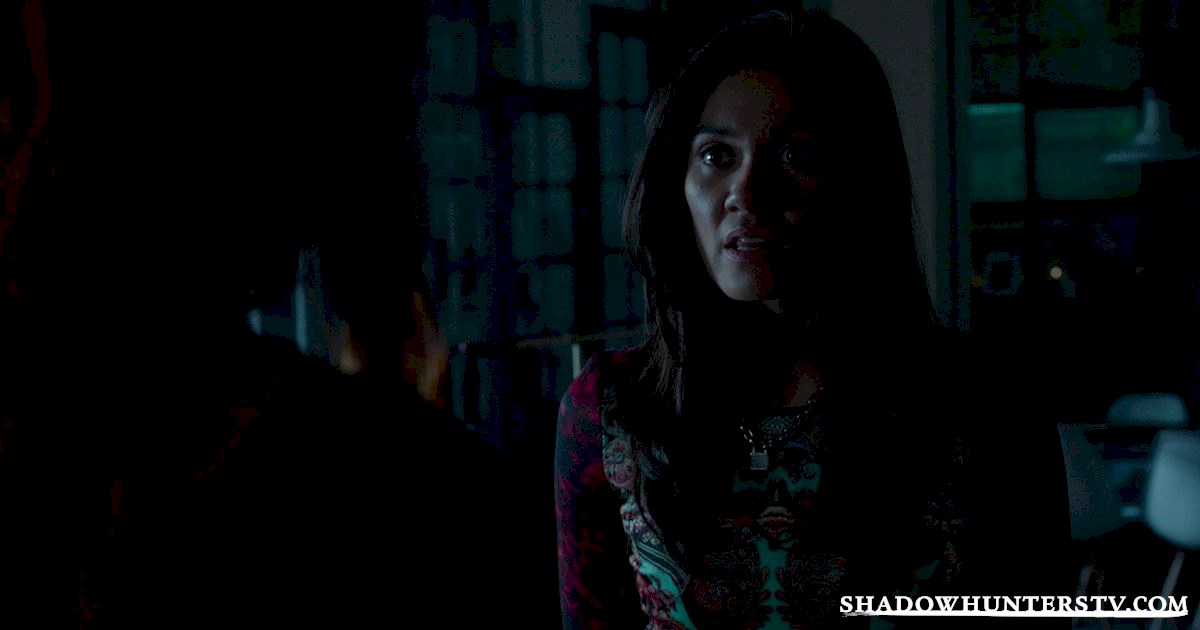 Clary wakes in a hospital bed in the Institute, confused and having no idea where she is. Jace perches on the end of her bed and gives Clary a much needed history lesson about who Shadowhunters are: part angel, part human beings meant to protect mankind from demons. Clary receives a phone call from Simon, who’s tracked her to what appears to be an old derelict church. Clary dons one of Isabelle's outfits and heads outside to meet Simon. A strange suited man appears and calls Clary’s name, but Jace has killed him before he manages to get anywhere near her. Back in Chernobyl, Valentine learns that Jocelyn has a daughter and he puts meeting her at the top of his to-do list. 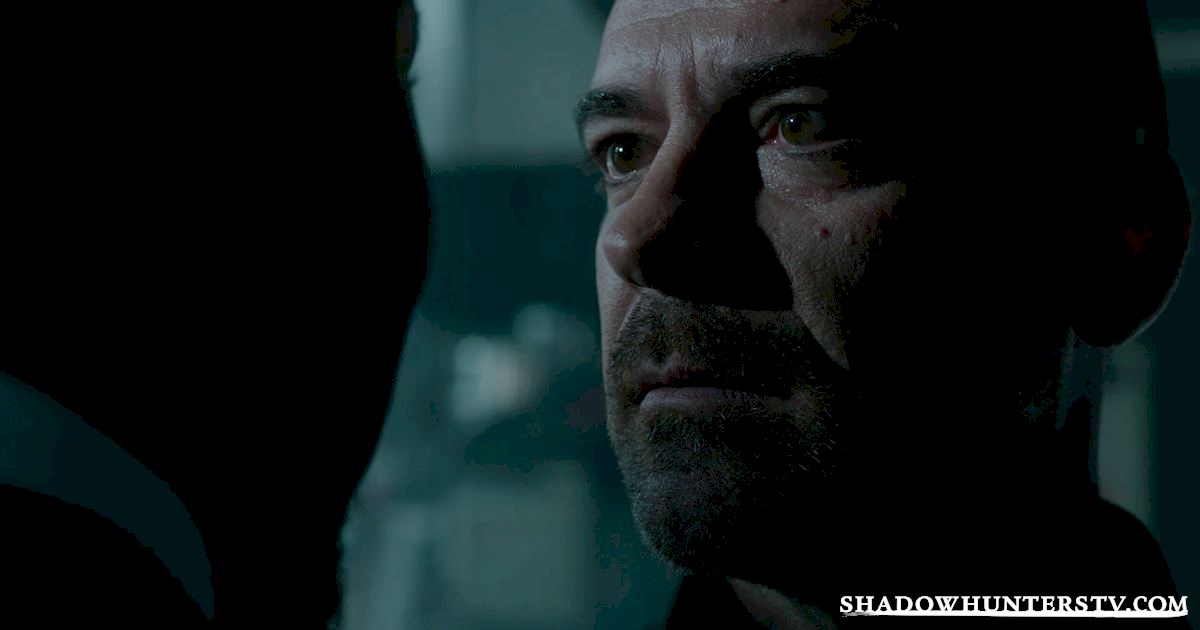 If You Love The Women Of Shadowhunters, You Need To Watch The Bold Type