Clary has the Mortal Cup. Life is good. 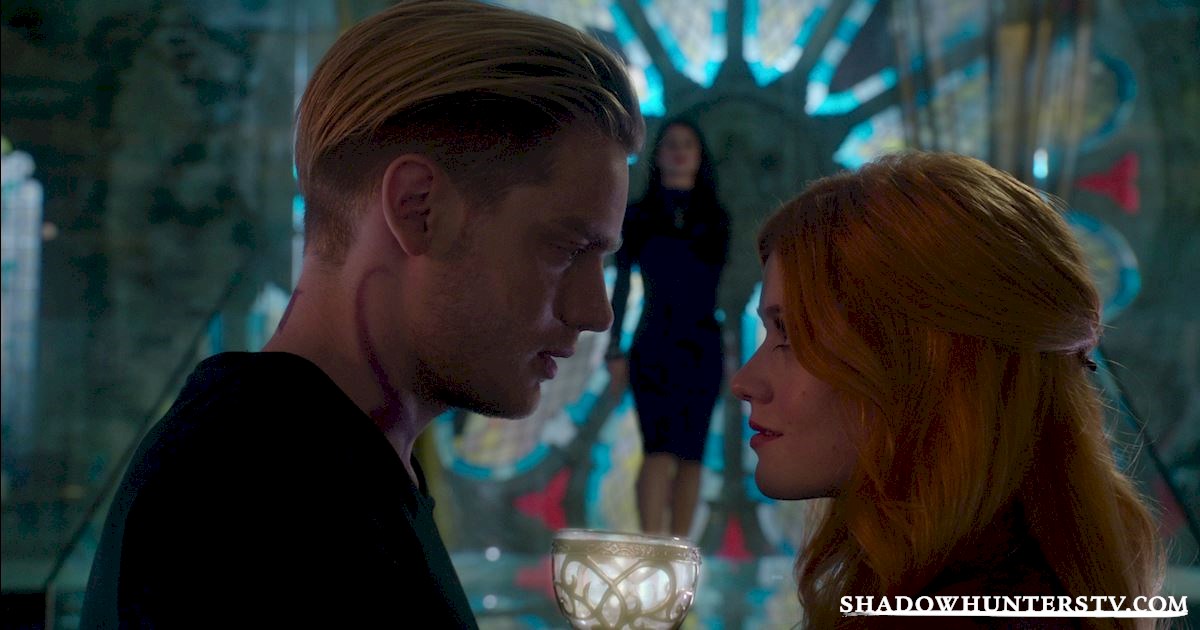 Clary and Jace are getting their flirt on, over the Mortal Cup, when Izzy uses her whip, in the most bad ass way possible, to steal it from them. Meanwhile, Alec's freaking out that Valentine might try to get in to the Institute. Ever the rule follower, he feels the Cup should be in the hands of the Clave. Jace and Clary, however, convince Alec to keep the Cup safe within the Institute. Alec is definitely not down with this solution one bit! 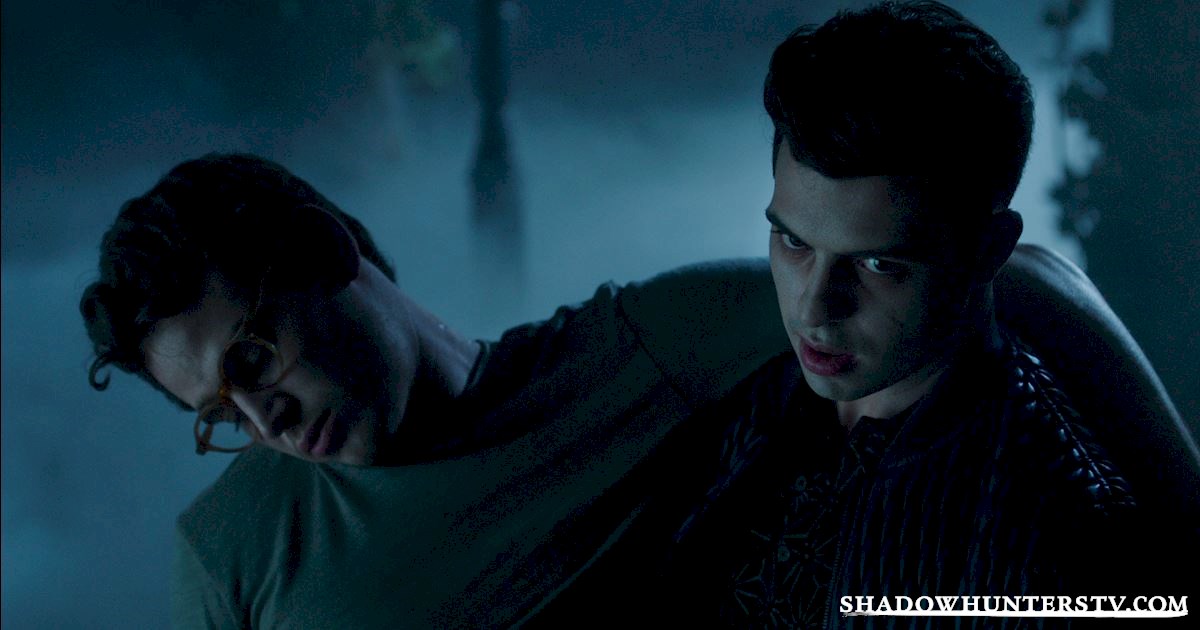 Is someone be trying to break in to the Institute? A shadowy shape is definitely outside, and it's... woah, wait, Raphael holding a lifeless Simon. Panic! Plus, killing a mundane means the vampires have breached the Accords. Raphael explains that it was only Camille who had attacked Simon, not any of the others. Clary is heartbroken and begs Simon to come back. Raphael describes Simon as a fledgling and states that he can be resurrected. Simon has two options: be turned in to a vampire, or staked through the heart by sunset. 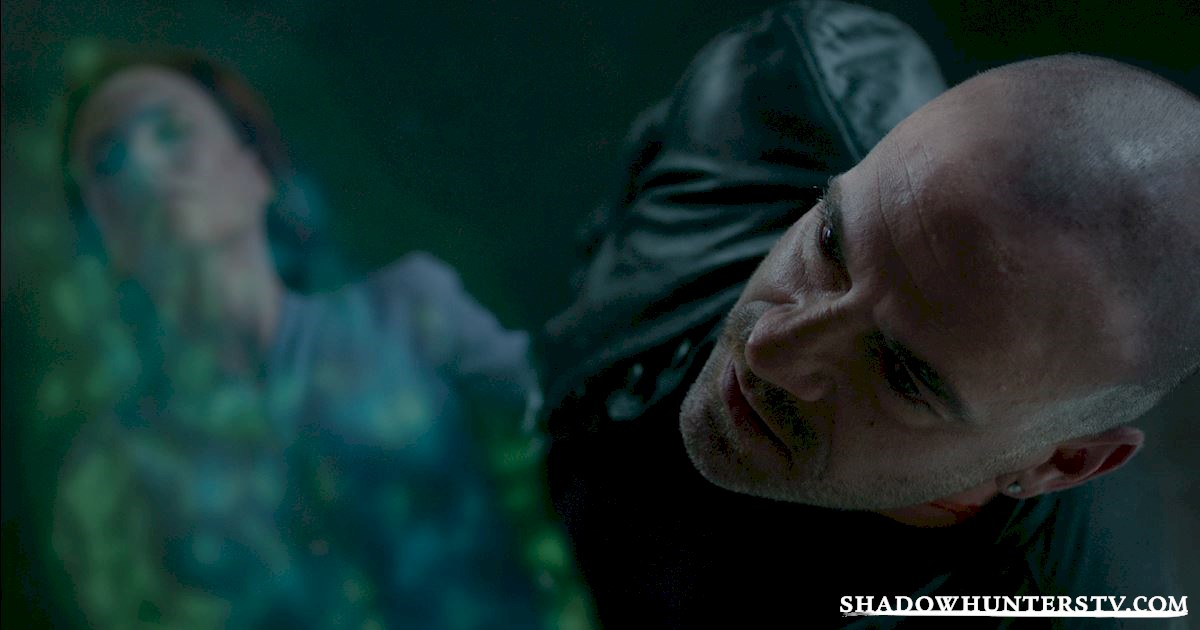 Valentine has a (one way) heart to heart with Jocelyn and has worked out that Clary is his daughter. Blackwell, a Circle member, arrives through a portal. He tells Valentine that Clary has the Mortal Cup, and that she has taken it to the New York Institute.

The Lightwood family have a chat. 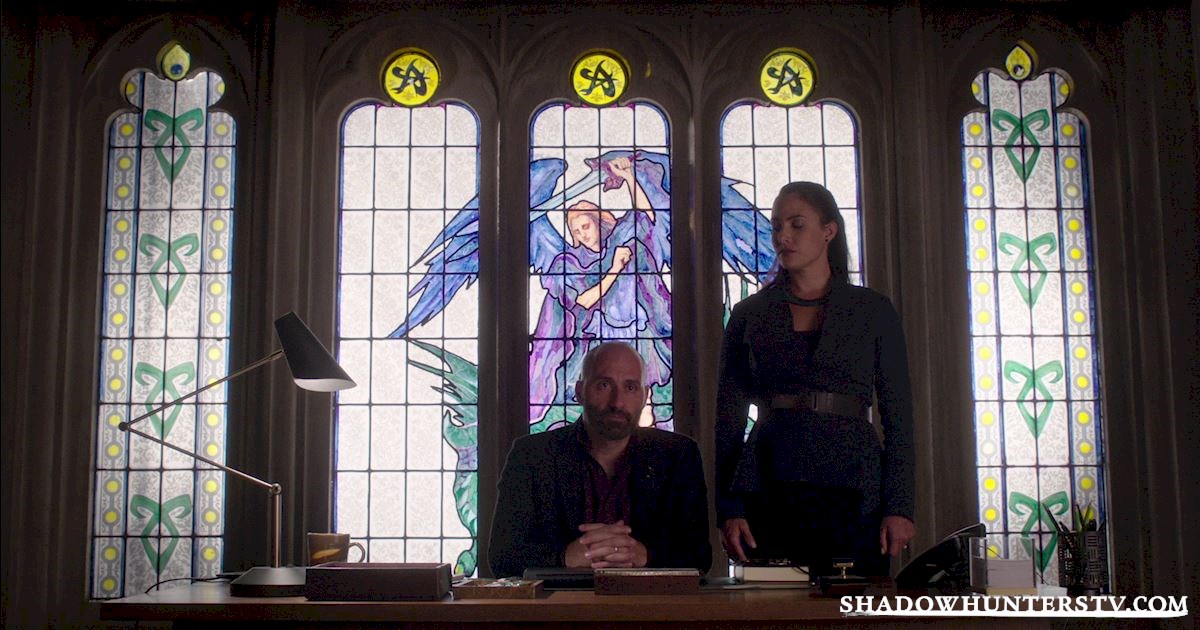 Robert and Maryse are concerned about Valentine getting stronger. They tell Alec and Izzy that the Clave does not believe that the Seelies are thinking of switching sides. The Clave are sending an envoy to observe the Institute and scrutinize their family's leadership abilities. Alec and Isabelle reluctantly agree not to meddle in Downworld affairs. They just won't mention the small thing of Raphael, and a dead Simon, being concealed in the basement. 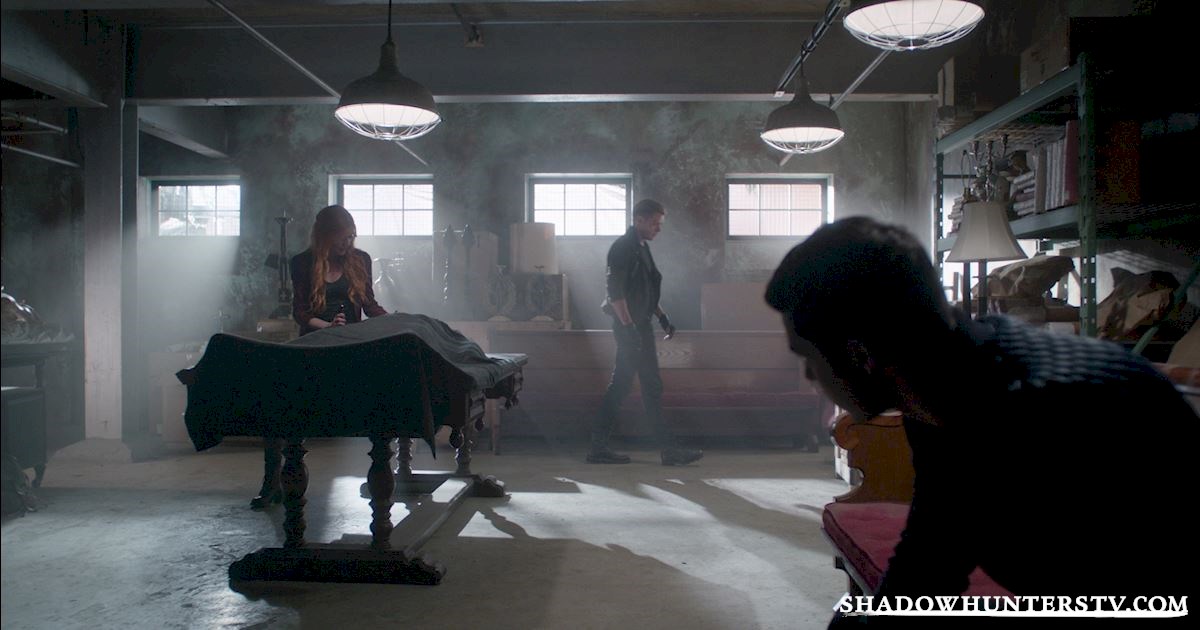 Clary listens to Simon’s tearful voicemail and apologizes about not being there for him. She blames herself for introducing Simon to the Shadow World in the first place. She is left with two awful choices and doesn't know what to do. Despite Jace's disapproval, she asks Raphael about the risks of burying Simon.

Is Valentine in the Institute? 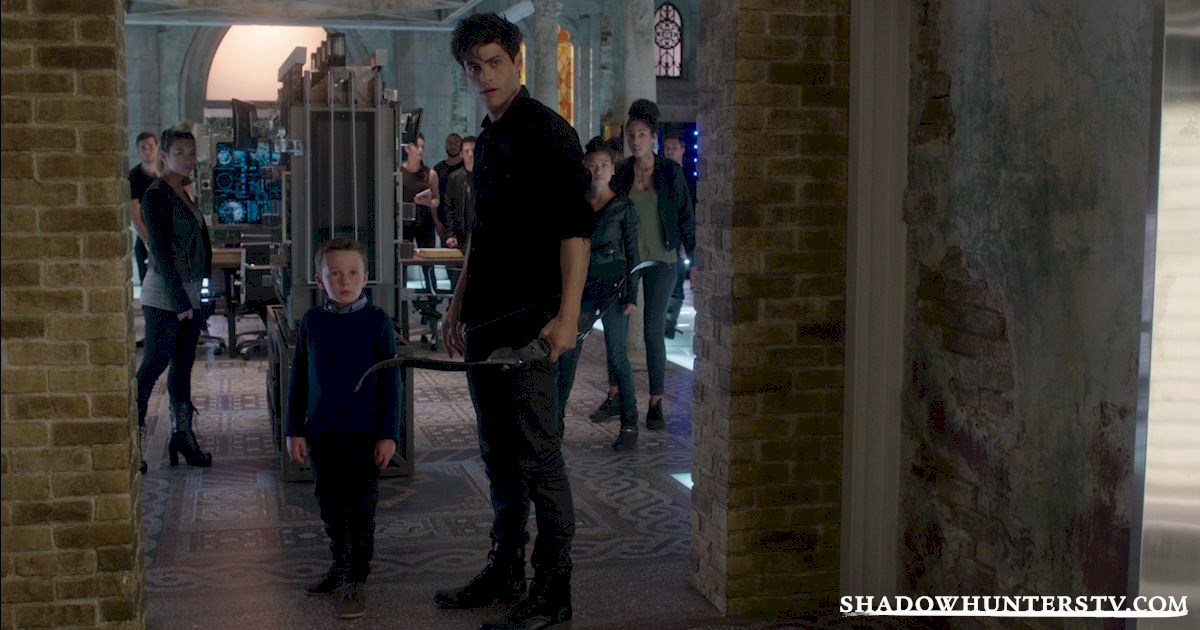 Max asks Alec to get his stele back for him, as it was confiscated after his fire/nourishment rune incident at the Mumbai Institute. Alec bargains with Max that if he stays out of trouble for the next few days he will get it back for him. As they are chatting, Valentine walks through the front door of the Institute! He is looking remarkably relaxed about the whole thing. Alec swiftly reaches for his bow and arrows. The figure that we thought was Valentine turns in to Lydia Branwell, the envoy from the Clave who is taking temporary control of the Institute.

The Jade Wolf is attacked! 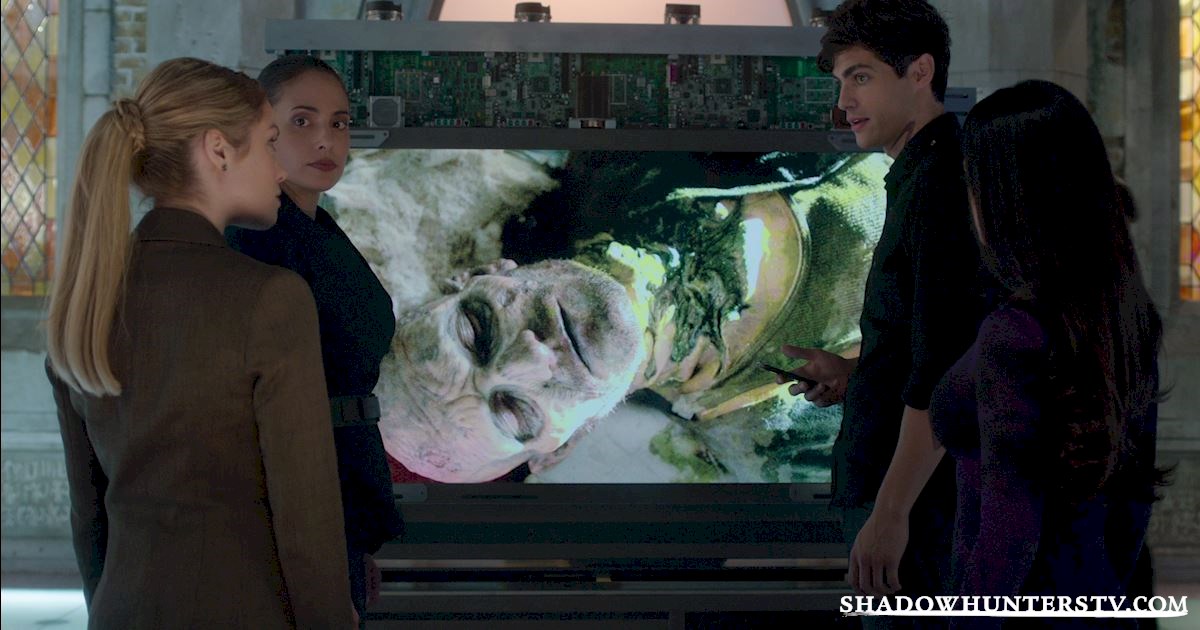 Blackwell is seen outside the Jade Wolf with two gruesome looking Forsaken. One is ordered to attack the restaurant. Luke and members of his pack transform in to werewolves and a battle commences. Back at the Institute, Alec shows Lydia, Maryse and Izzy pictures of the defeated Forsaken which Luke has sent to him. Lydia asks Alec to join her in investigating the attack. Maryse and Isabelle clearly do not like Lydia's way of doing things. 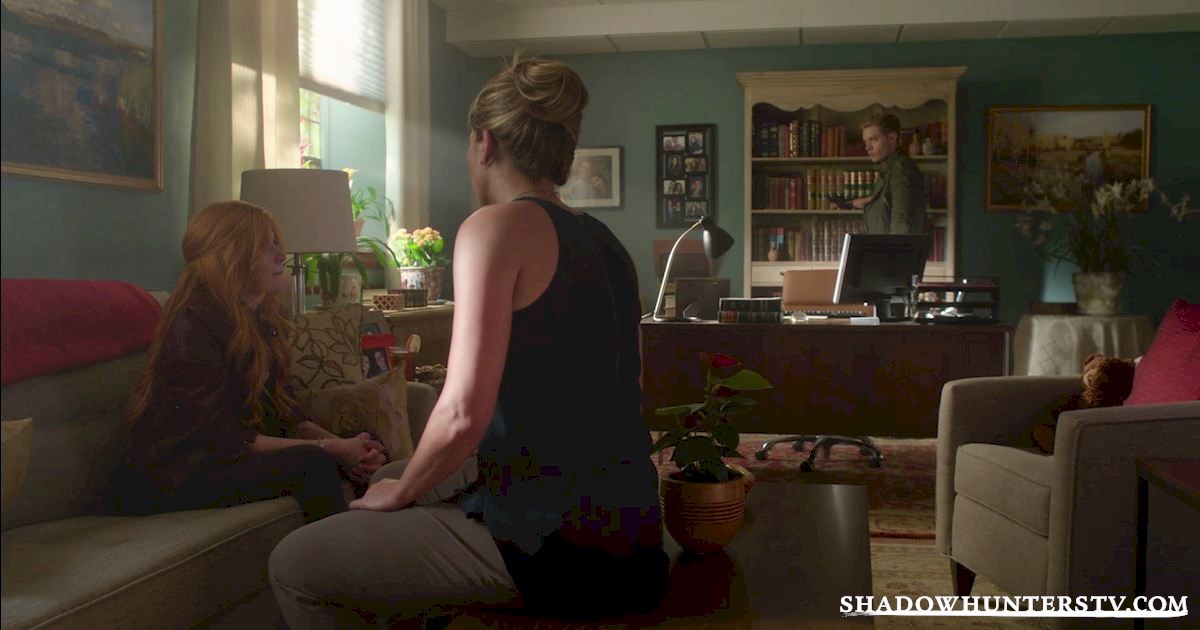 Clary wants to tell Simon's mom that he has had an accident and won't be coming home again. This gets super difficult when Elaine breaks down over the thought of losing Simon or Rebecca. Jace, invisible to Simon's mom, listens in to their chat and warns Clary not to reveal the Shadow World to Elaine. Later, in Simon's room, Jace tells a devastating story about a boy and his pet falcon. He warns Clary to listen to her head as emotions cloud judgement. 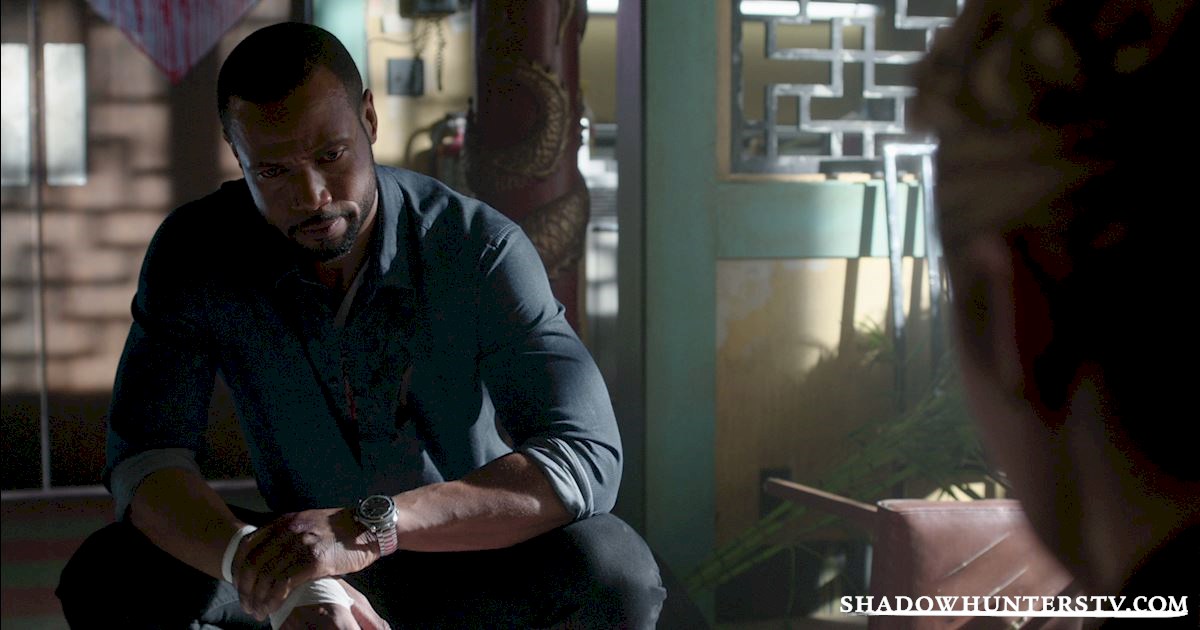 Outside the Jade Wolf, Lydia tells Alec that he's hot news in Idris. It turns out that all the girls want to meet the most eligible bachelor in the Shadow World. We learn that Lydia is married to her work after losing her beloved husband and dream job all at once. Luke explains that this Forsaken was stronger than any he's previously seen and it took five wolves to destroy it. Lydia orders the body to be taken back to the Institute to be assessed. There is a concern that ex-Circle members are being targeted and when she asks for extra protection at the Institute, Alec assumes it is for Hodge. However, Lydia lets it slip that Alec's parents were ex Circle members too. 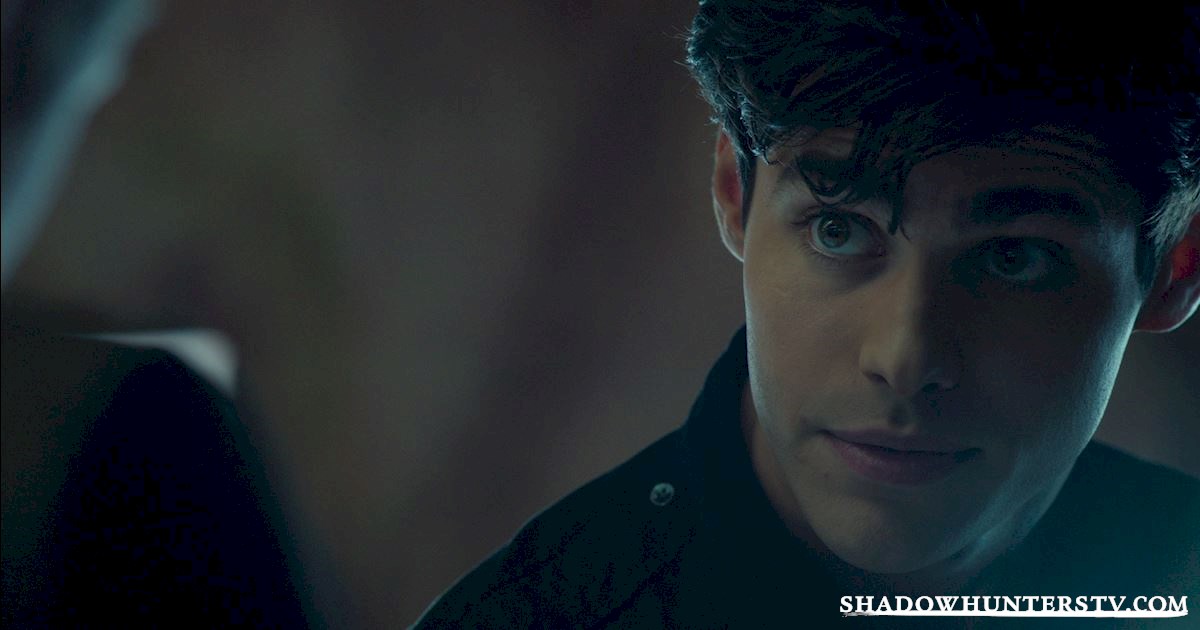 When Lydia suggests that Magnus Bane should come to the Institute to check whether magic was used to create the Forsaken, Alec has the cutest moment ever! Watching him stumble over his words whilst trying to describe Magnus as “quite magical” is the most adorable thing ever. Alec is clearly hurt and angry about his parents concealing their past from him.

Something stinks (and it's not just the Forsaken)! 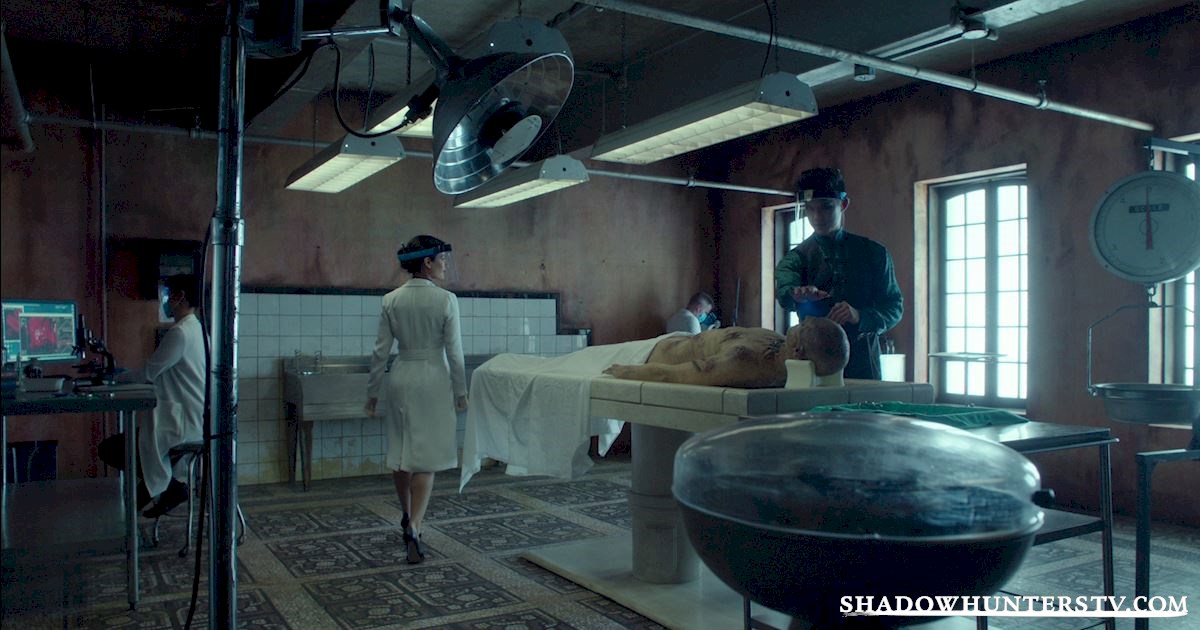 Izzy and Magnus start to investigate the Forsaken's body which is already starting to decompose. Whilst Magnus quizzes Izzy about Alec's feelings, she accidentally lets slip that her parents are hoping to find Alec a suitable wife. Magnus looks devastated as they discuss following duty, as opposed to your heart.

The journey to becoming a Downworlder. 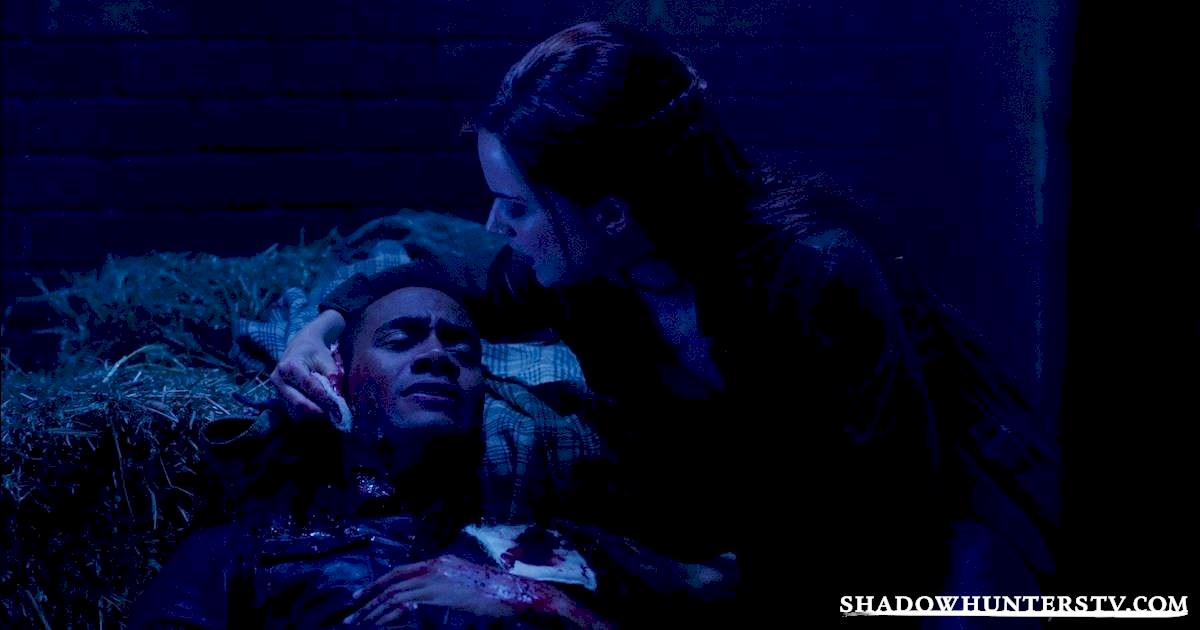 Clary and Jace visit Luke who tells them about the Forsaken attack. Clary sobs as she explains what has happened to Simon. We see how scared Luke was when he started his werewolf transformation. Desperate not to ever hurt Jocelyn, Luke was willing to kill himself until Jocelyn pleaded with him not to do it. Luke warns that Simon’s journey won’t be easy and that Clary has to make the right decision for him, not herself. Clary returns to Simon where Raphael asks for her decision.

Half of Malec gets shirtless... 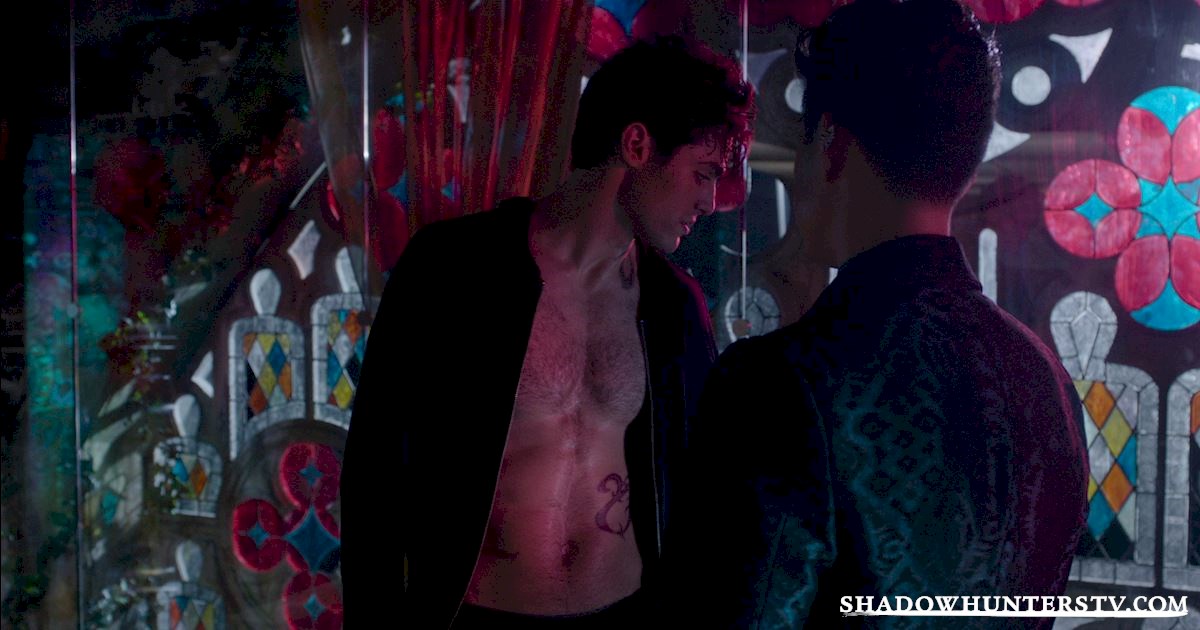 Magnus delivers the findings of his Forsaken investigations to Alec. Mr Lightwood is working out and Magnus can't take his eyes off him (neither could we). Alec speaks passionately about his whole life being a lie and Magnus suggests that he starts living for himself. Shortly after this adorable moment, Alec overhears that the Clave will be taking full control of the Institute. The law is hard but it is the law.

Clary must make the hardest decision of her life. 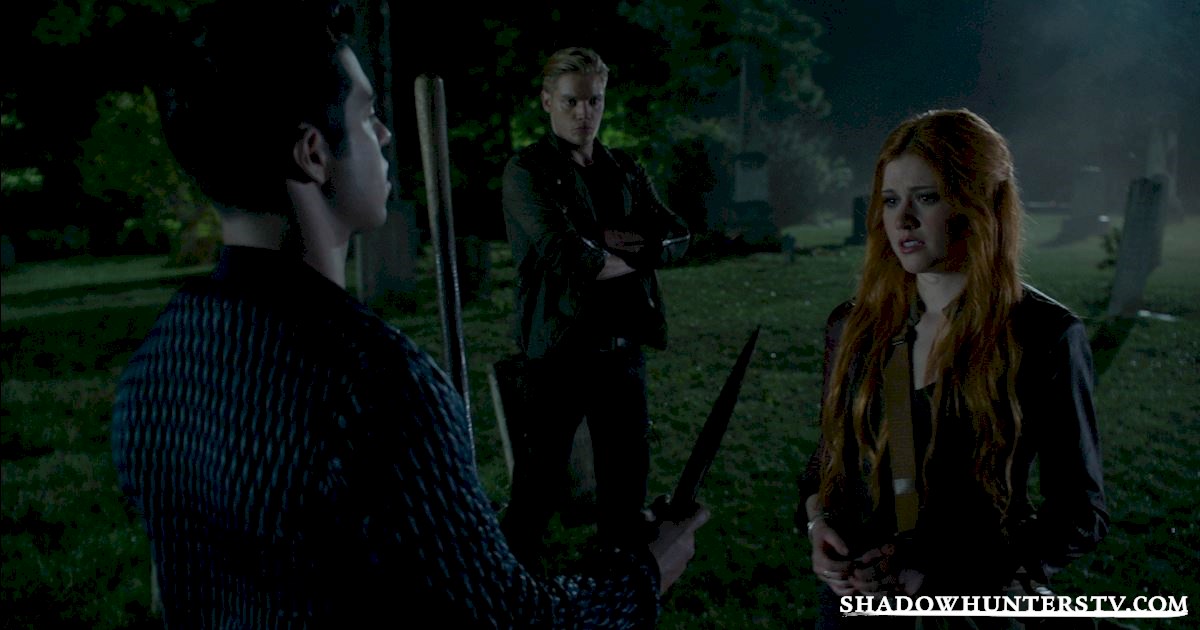 In the graveyard, Clary is facing two horrible choices. Camille appears next to Simon's dead body, demanding her property back. She has a large group of vampires to back her up too! Raphael tells them all that Camille killed Simon and has been breaking the Accords. Camille dares to say that Simon means nothing resulting in Clary punching her, and the vamps closing in around their former leader. Clary makes her choice and begins to dig a grave. Jace helps her bury Simon when she finds it all too upsetting. 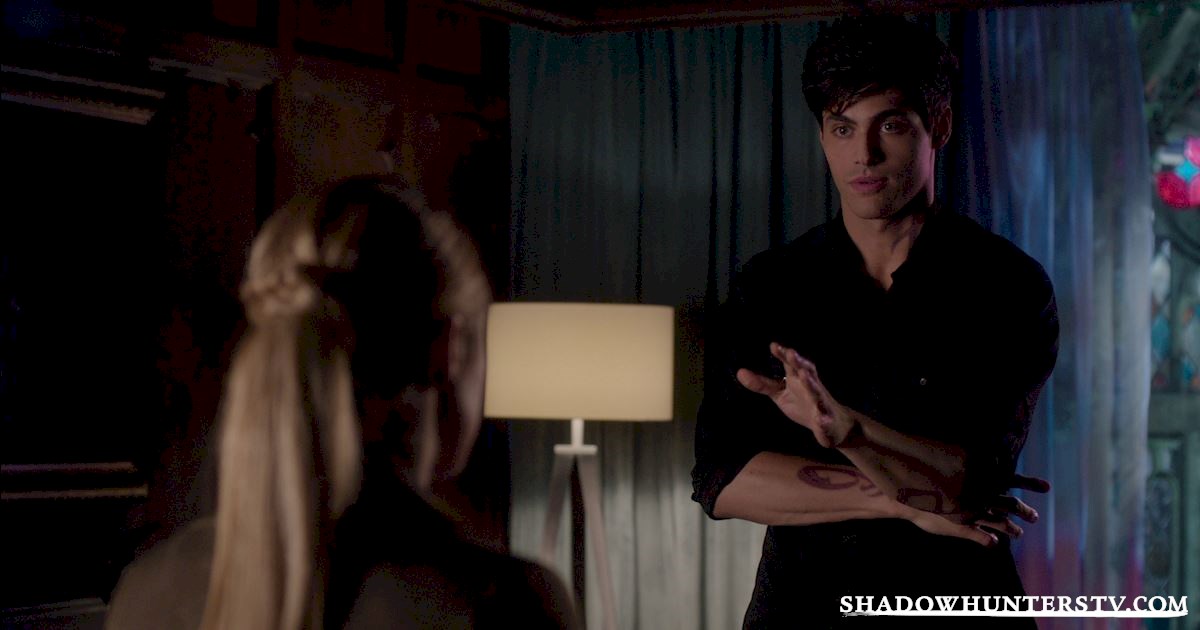 Alec proposes to Lydia Branwell so that they can create a strong political alliance, and run the New York Institute together. Romantic huh? 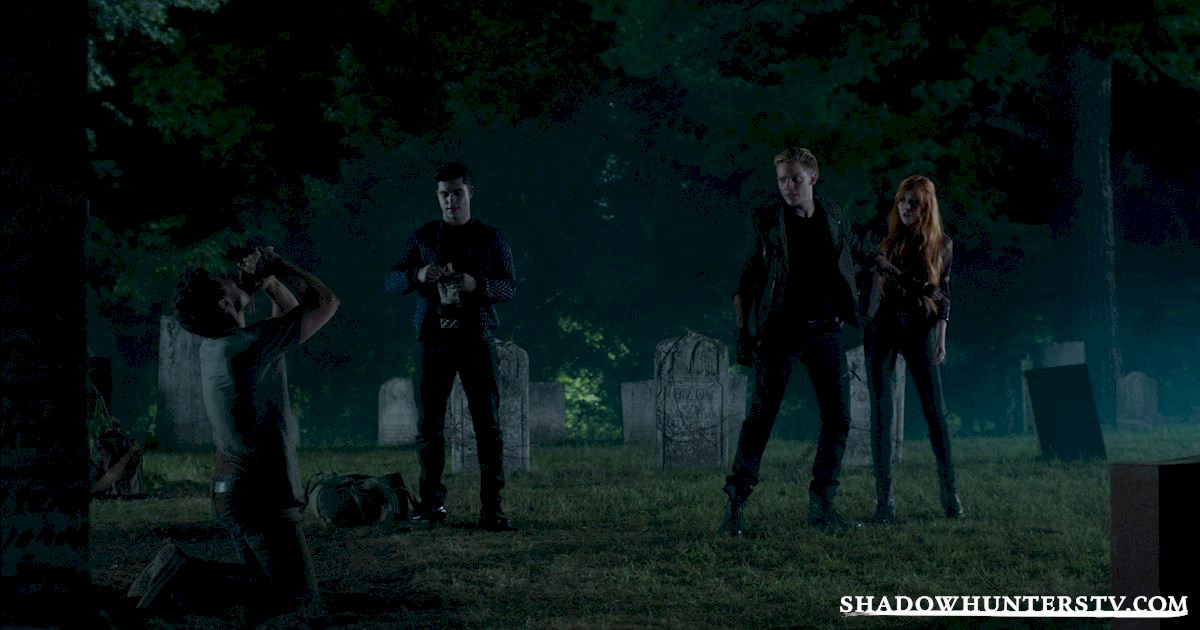 Clary tells Jace that love makes people stronger as they sit by Simon's grave. The earth shakes beneath them and Simon bursts through the ground. Raphael tells them that he will be hungry and throws bags of blood at Simon who devours them like an animal. 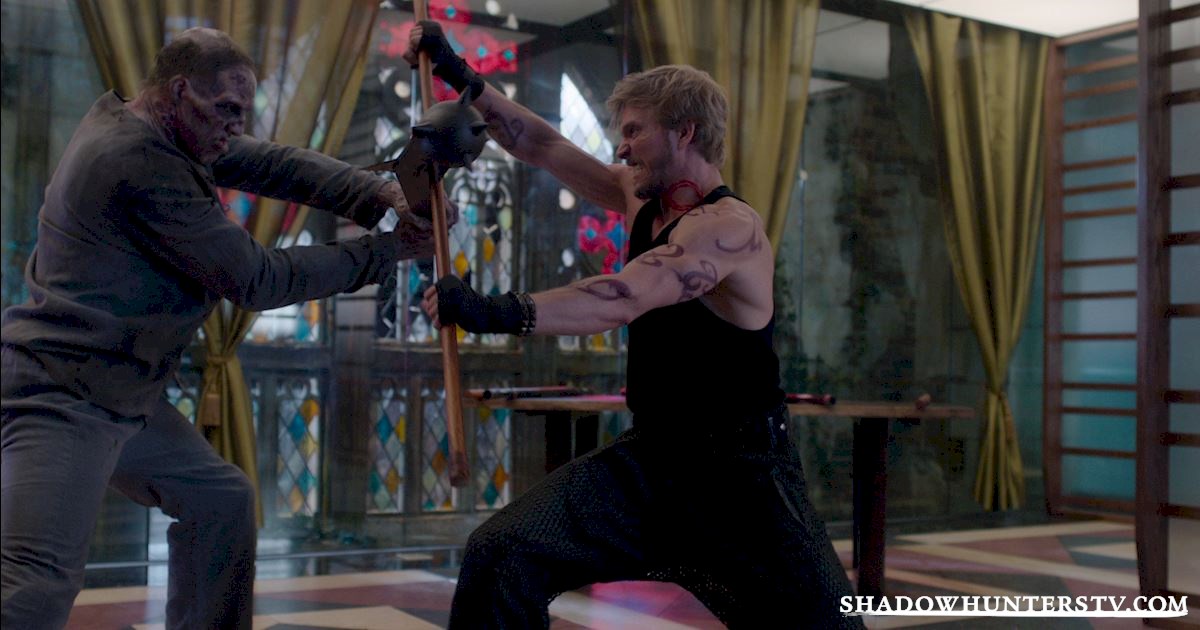 Izzy works out that the Forsaken had angel blood in its system. A Forsaken is then seen breaking in to the Institute as its blood allows it to get past the protective wards. Hodge is seen battling the creature, before Alec saves the day by piercing it with his arrows.

Simon, newly fed, asks Clary what is happening to him. He stares at the blood around him, feels his fangs, and panics. He calls himself repulsive and an animal. Clary tries desperately to remind Simon that he is her best friend and is the same guy that he's always been. Raphael promises to look after Simon. Jace comforts Clary as a distressed Simon runs away deep in to the night.

Alec and Clary are forced to make some hard decisions.