1. What was your favorite part of shooting this episode? 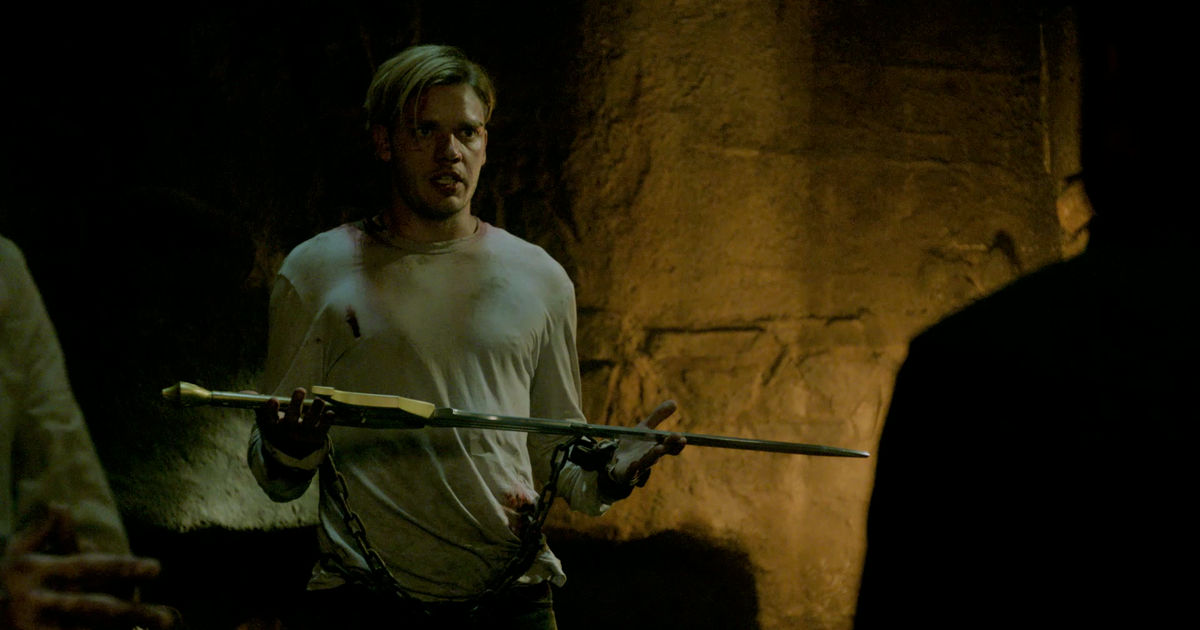 JG: Jace's trial with Aldertree in the City of Bones. Dom brought such great depth to the performance of Jace's struggle to fight the truth-drawing powers of the Soul Sword. As a writer, that is one of my favorite scenes in the episode -- as I love creating a situation where a character has to struggle with their inner truth. Jace is a character who prides himself in his ability to triumph in battle. And this scene puts him in a unique battle that we've never seen him have to fight. He has intimate feelings that he doesn't want exposed, and yet the Sword denies him the ability to protect his secret. It's a battle he can't win. And for me, that's very compelling for this character.

2. From Aldertree's point of view, is the torture of Raphael really justified? What were the discussions like in the writers' room about this scene? 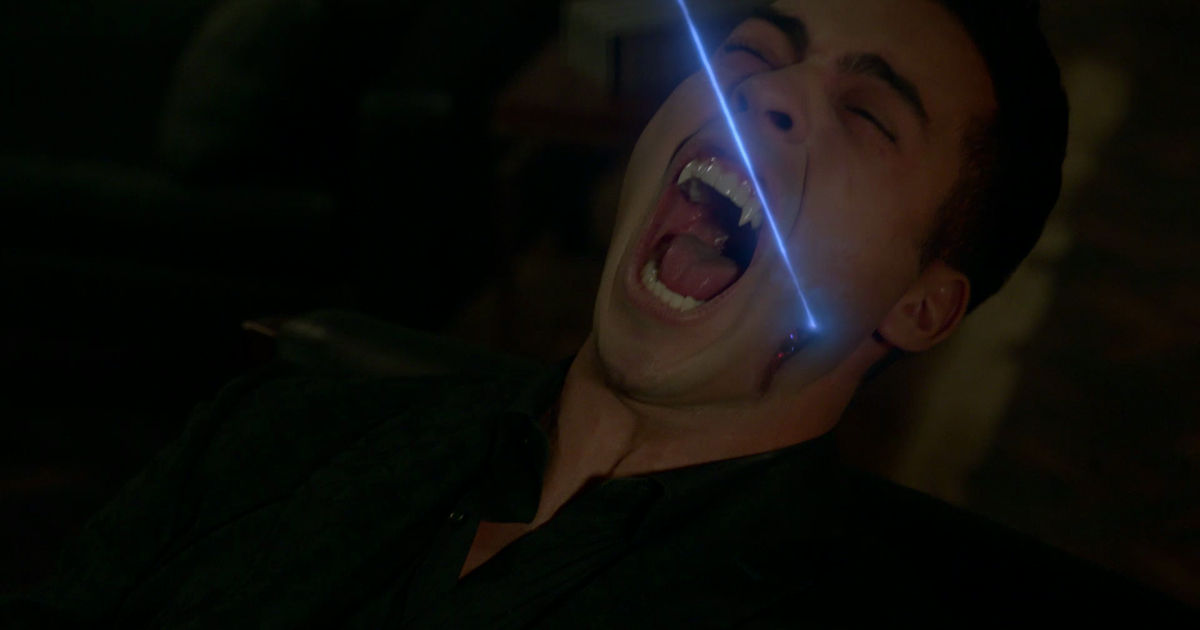 JG: In discussing this scene in the writers' room, we wanted to explore the complexity of Aldertree's dilemma. It was important to us that Aldertree not be a character who's acting out of pure evil and lack of regard for humanity. He's not a Clave leader who believes that the torture of Downworlders is acceptable, and he has great respect for upholding the Accords. At the same time, the fact remains that vampires loyal to Camille are attacking mundanes in direct violation of those very Accords. As the Head of the Institute, Aldertree's #1 priority is to protect mundanes. He's given Raphael many chances to cooperate and turn Camille in. But with the illegal mundane feedings now out of control, he's desperate for answers and believes Raphael is holding back information on Camille's location. Raphael claims he's doing everything in his power to find Camille. But unfortunately, Raphael doesn't have a squeaky-clean record with his behavior in the past. So it's not as simple as taking him at his word. As much as Aldertree doesn't condone torture, he feels he's at the point where he has no better option.

3. Why does Magnus send Raphael and Simon away before summoning Camille? 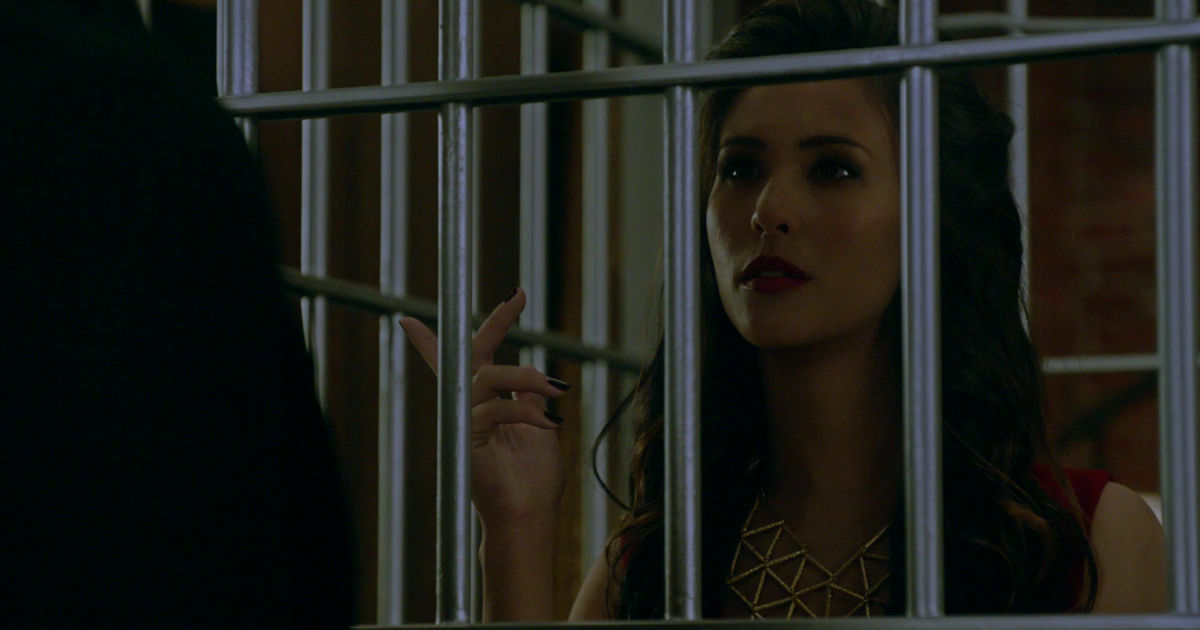 JG: At this time in the episode, Magnus still isn't sure he can follow through with Raphael and Simon's request. They want Magnus to help them summon Camille and hand her over to the Clave. But Magnus' history with Camille is complex. Before he can make his decision, he needs time alone with Camille. As with any difficult decision we confront in life, nothing is ever black and white. There are many factors playing into what Magnus feels he must do.

4. Magnus tells Simon that Raphael is like a son to him. Can you shed some light on their history? 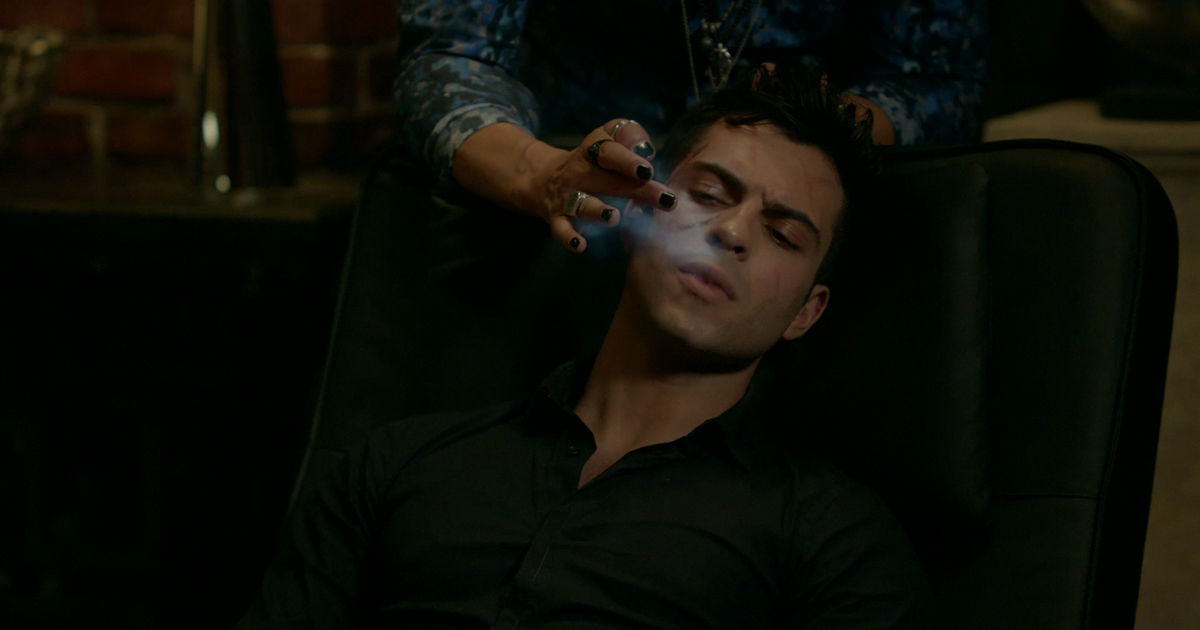 JG: When Raphael was newly turned, he didn't have anyone to guide him through the difficult transition of losing all ties with his mundane life and becoming a vampire with new and seemingly uncontrollable urges. Consequently, he was a young vampire out of control, feeding on mundanes, with no clan, no home, no one to guide him. Magnus found Raphael during these troubled times and became a father figure for the young vampire. With hundreds of years of experience as a Downworlder, Magnus was able to set Raphael on a better track. He taught him how to control his urges and find his footing as an immortal.

5. Does Magnus' story about Camille saving him at his lowest point prove there's some good in her? 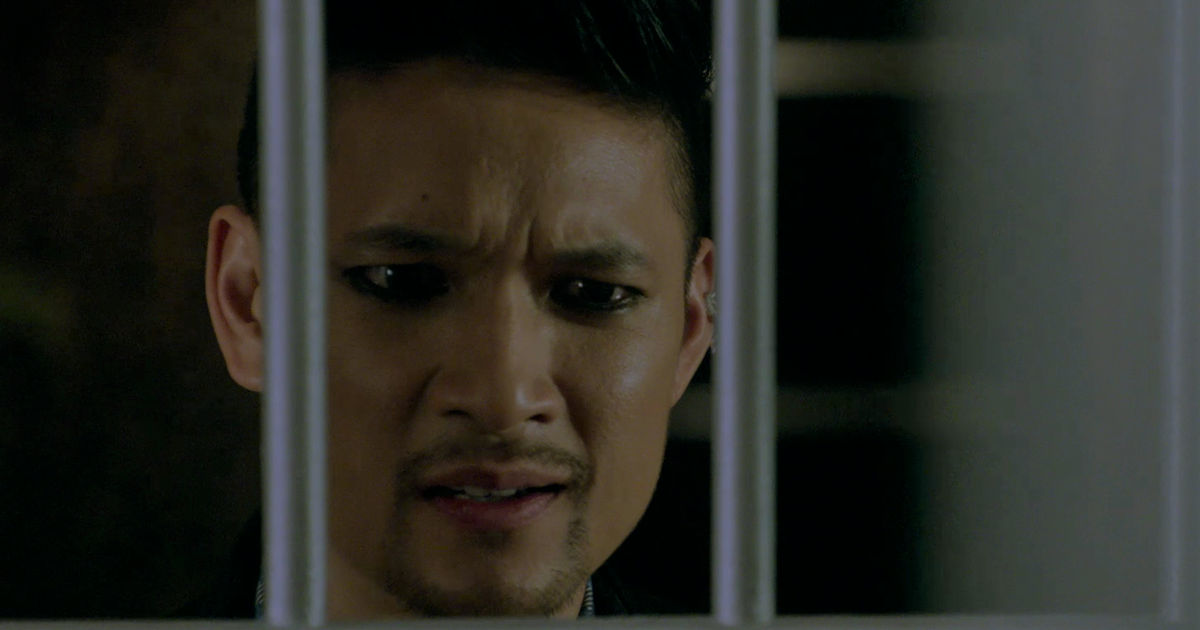 JG: Absolutely. Camille is not pure evil. And her love for Magnus is genuine. That's why Magnus is struggling so hard in this episode with turning her over to the Clave. While it's true that Camille is responsible for the recent slew of vampire feedings on mundanes, she and Magnus have a long history. And she has been there for him in his times of greatest need.

6. What motivates Jace to try to take his own life after Aldertree sentences him? 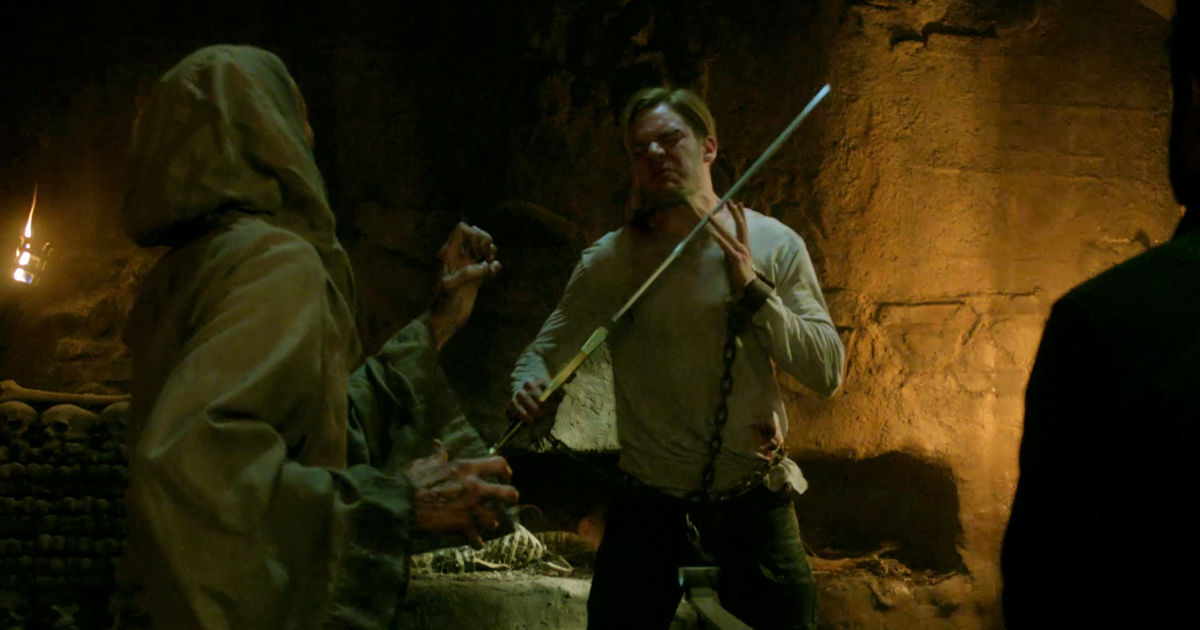 JG: I like that this moment is open to interpretation by the audience. In my mind, the moment Jace brings the sword to his throat is about two things -- Jace is a warrior who wants to control his destiny and he's in great pain over the hidden truth that the Soul Sword just made him confess. The fact that Jace loves Clary as something more than a sister and can't get these feelings to go away is a source of great shame for Jace. He never wanted anyone to know about these feelings, and now something he feels great shame about has been exposed. On top of that, Aldertree is going to sentence Jace to life imprisonment in the City of Bones -- a fate worse than death. There's no way a warrior like Jace is going to let Aldertree determine his fate, so this is a moment where he's taking fate into his own hands.

7. Alec, possessed by the demon, kills Jocelyn! What repercussions will this have on his relationship with Clary? 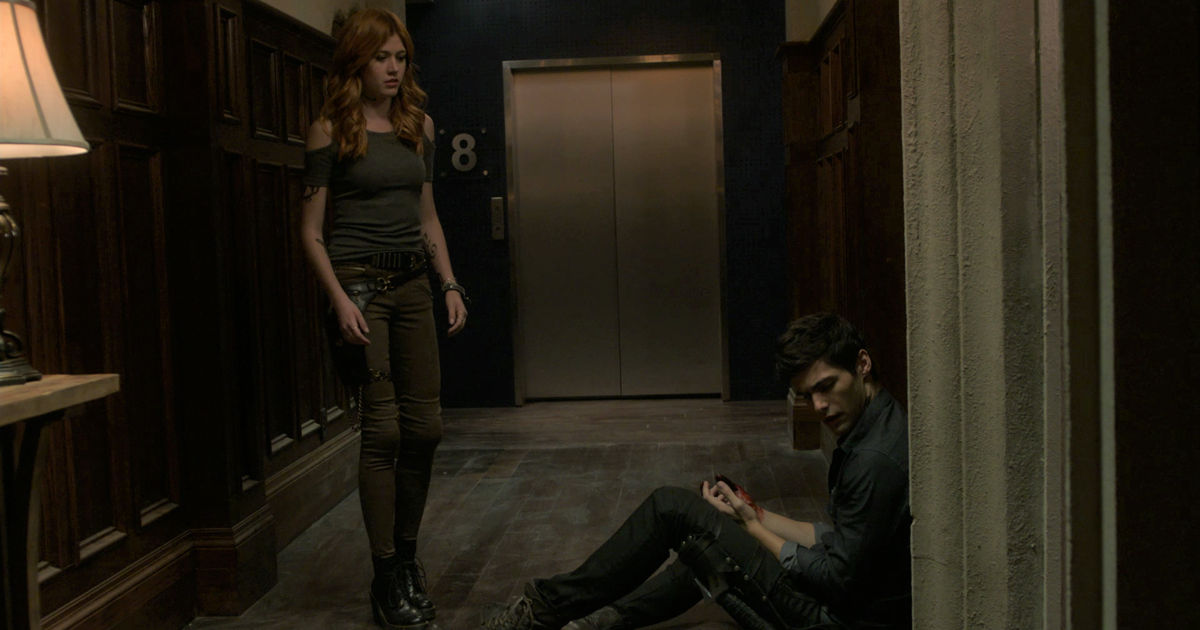 JG: Both Clary and Alec know that the demon is responsible for Jocelyn's death, and Clary doesn't blame Alec for what happened. But Alec will carry a great amount of guilt with him nonetheless, as he can't help but feel responsible in some way. He will see Clary struggle with the pain of losing her mother and will go to extremes to help her through the loss. Ultimately, it will transform their relationship from what was set up in Season 1.

8. Two major recurring characters, Jocelyn and Hodge, die in this episode. What went into the decision to kill these two off? Was it a difficult decision? 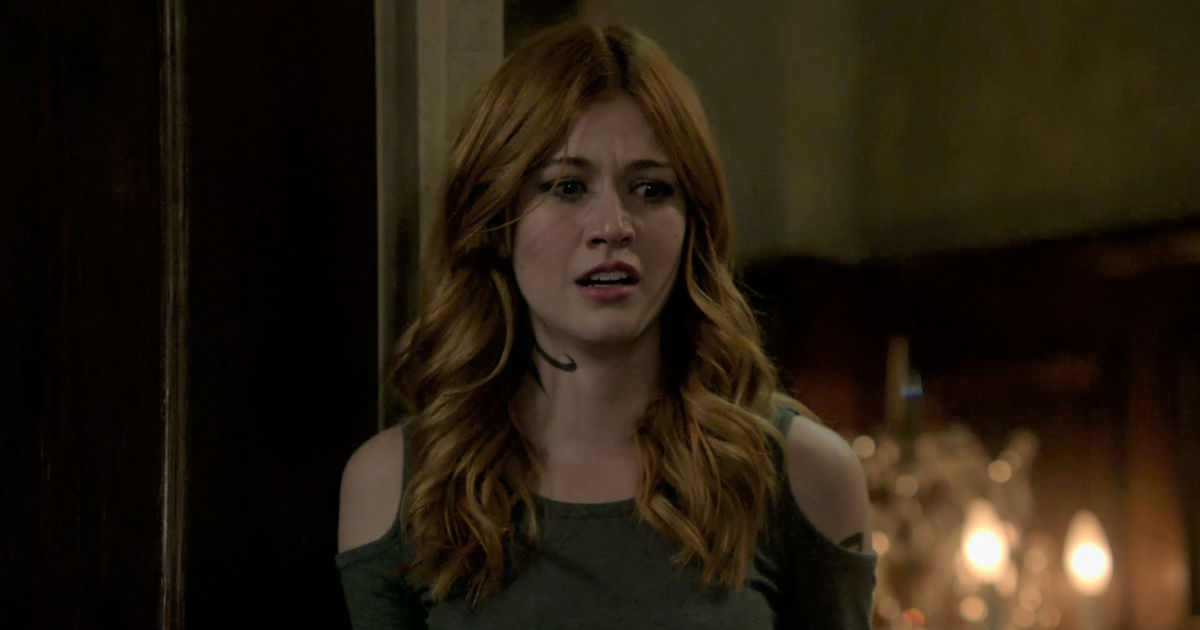 JG: As writers, we're always looking for ways to honor the books, yet also create surprise moments and journeys for our audience. Hodge died to honor his character's fate in Book 3, where he's killed after being held in prison in Idris. With Jocelyn, it was definitely a difficult decision, but we wanted to create a journey for Clary where she has to deal with the pain of losing her mom and find her path forward despite the heartbreaking loss.

What did you think was the most shocking moment of S2E4?

Tell us in the comments below!