ShumDario News describe their site as "the first and most complete source" for all the happenings with Harry Shum, Jr. and Matthew Daddario, following their work on Shadowhunters and their own projects. 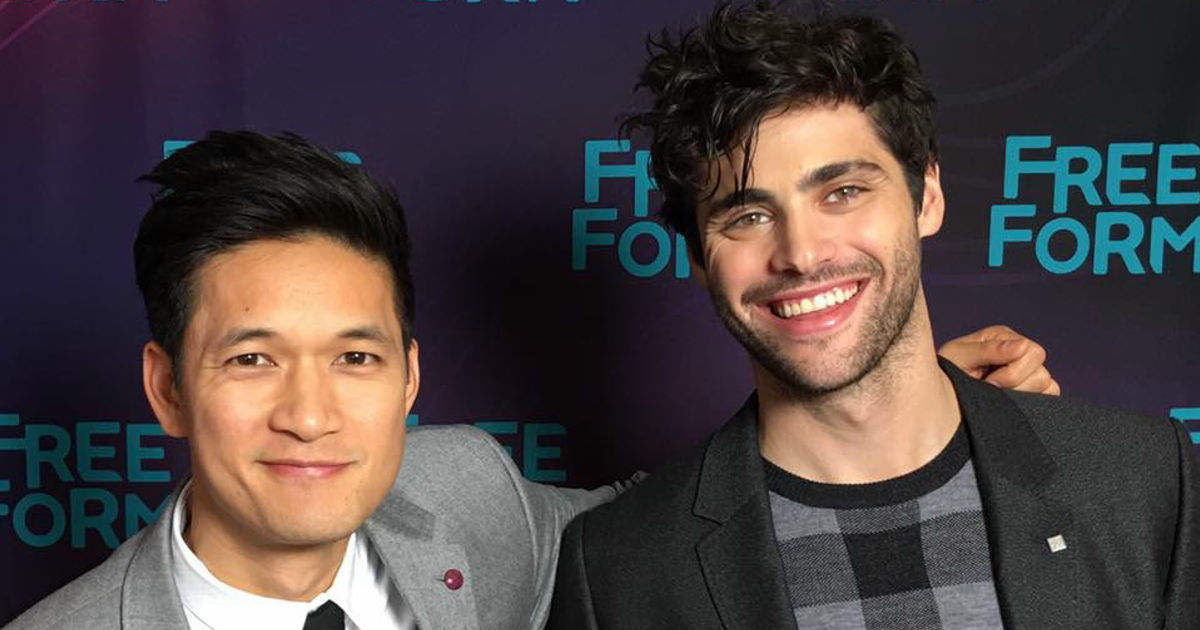 And they write comprehensive, detailed reviews of each episode of Shadowhunters. Keep reading to check out their review of 'This Guilty Blood':

There was a jaw dropping new look and feel to the show that definitely didn’t disappoint the anxiously awaiting fans. With stunning new visual effects and a darker, grittier adult theme, gone were the brightly colored more whimsical looks of the previous season. One fan described the comparison between the two as “Wizards of Waverly Place transformed into The Walking Dead”, which quite aptly surmised the dramatic change, especially after a deluge of blood and death.

With 1.19 million viewers tuning in for episode one titled “This Guilty Blood”, it far surpassed the season one finale last spring. This boost will no doubt bring legions of new support to the amazing Shadow World that has been so lovingly created by an immensely talented team of writers, producers, cast and crew.

We here at ShumDario News found the show brilliantly showcased the talents of Harry Shum Jr, as High Warlock of Brooklyn Magnus Bane and Matthew Daddario as Shadowhunter Alec Lightwood.

Any fears fans had during the hiatus that these two beloved characters would be sidelined this season were quickly laid to rest as the pair lit up the screen for a majority of the episode.

The audience was quickly thrust to the edge of their seats as the fast paced, intense search for Alec’s parabatai, Jace Wayland, took center stage. We saw Alec in a near frantic state of desperation lashing out at anyone and everyone, including Magnus, as he attempted to take command of the Institute. Unfortunately, he was not the one in charge and was swifty put back in his place by the acting head and his ex-fiancé, Lydia Branwell, played by Stephanie Bennett. Alec continued to lose control over almost every aspect of his life throughout this first episode, which was in stark contrast to season one where he was found to be the most “in control” character of the show. It brings a whole new depth and breadth to the Shadowhunter, and feels almost like discovering a brand-new character.

Showrunners Todd Slavkin and Darren Swimmer have assured fans they plan to develop the emotions and backstories of each character, giving them more depth and dimension. We felt this change was already quite evident by the end of the first episode alone. Todd told Empire Online:

"We felt like the characters could have more depth and there could be a more resonant emotionality in the show. In season one, we felt like things moved along very, very quickly, and the show was a little bit more plot-driven as opposed to being character-driven. What appealed to us in the great books that Cassie Clare created were these very interesting characters. It would slow down and you’d have these great moments where you’d get to know them and their back stories. When you’re dealing with warlocks that live for centuries, there’s so much interesting stuff that we felt could be mined."

The physicality and nuance of Harry Shum Jr’s performance in particular gripped the audience.

From his famous sassy comebacks to his heart wrenching pain and vulnerability. He is a true master of leading the audience through a touching and emotionally poignant journey. We were enthralled by the fresh look to his signature warlock mark and his newly revamped cat eyes that made a stunning appearance midway through the episode. This proved once again just how detailed and impressive the visual effects for this season have become.

Matthew Daddario also opened up with a new level of tenacity as he showed us the deep frustration and anguish Alec is currently going through with the loss of his Parabatai.

His usual stoicism now completely unhinged was shocking and at times even hard to watch. It was the perfect mixture of pain and anger mixed with an underlying sadness which gave his character a new complexity sorely missing from season one.

Magnus and Alec’s budding relationship (referred to in the fandom as Malec) is put through the wringer as we witness three intense scenes with raised voices and harsh words spoken.

The dialogue riddled with zingers like “After everything I’ve done for you!” and “What do you want from me?”. They must have been blows to the audience’s chest after flying high on last season’s epic kiss. Shocking as it was for fans of the Malec pairing, this discord brought a sense of reality to the screen, giving the characters more of a human connection the audience could really relate to. Harry Shum Jr. explained the vision for their relationship to Screener TV:

"I think we’ve left off in some place where there’s still a lot of confusion. Something huge happened obviously in episode 12 of last season, and I think we follow that through. You know that’s a big step for Alec and for Magnus. Specifically… he knows that there’s still a lot of work to be done. It’s not like ‘Oh they kissed and everything is going to be magical!’ Along with the threats that are happening with the Down World and the Shadow World I think all of that’s going to play into how they react towards each other. At this point it’s not even a relationship quite yet. I don’t think the audience has seen that. I think there have been things that have been floating around that might happen."

The two actors together on screen were electric, their combined talents weaving into a potent chemistry which left many fans wondering if their scenes together had been improvised.

The fan favorite moment between the two was no doubt the balcony scene where a genuinely apologetic Alec attempts to smooth things over with an obviously wounded Magnus. After three previous scenes where the pair argued quite vehemently they finally shared a heart melting moment together at Magnus’ loft. Alec is forgiven and gives Magnus the blush fans had been craving, as well as a simple touch on the arm sliding down to hold his hand which perfectly demonstrated a tenderness and closeness between the characters that fans have been dying to see.

As we prepare ourselves to thoroughly enjoy the next 19 episodes coming in this second season of Shadowhunters we are very optimistic that Harry and Matt’s performances will continue to impress us. The overall improvements to the show as a whole will no doubt add to the enjoyment as this dark and magically dangerous world comes alive on screen each week. We invite you to follow along with us across all our ShumDario News social media platforms.

Be sure to tune in to Freeform every Monday at 8/7c for Shadowhunters!

The Institute is in upheaval after Jace's departure.

We’ve Ranked The Bravest Things Clary Has Done This Season