Cassandra will be hanging around Comic Con until later today for her autograph signing! Stay tuned and we'll post some photos! 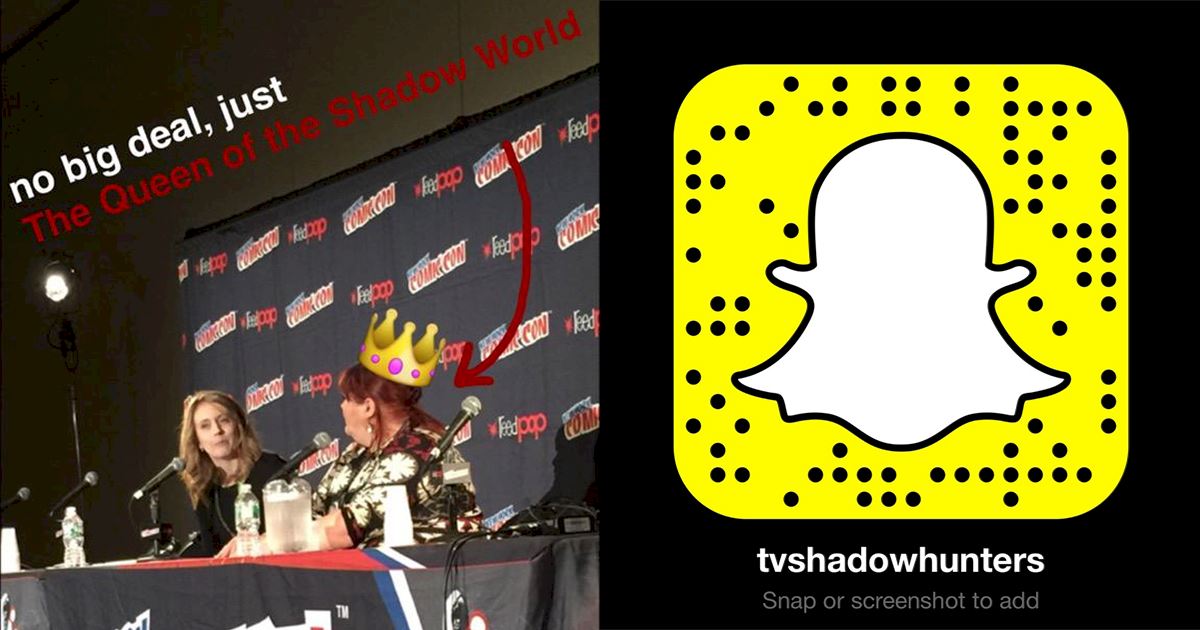 That's all for now!

Harry Shum Jr has kissed @cassieclare & high fived the whole room. I like him. He's a firecracker.

On how she figured out Jace's name...

Cassie said that she knew Jace's name had to be broken down into two letters because of the mystery box in City of Bones. The name had to be a clue for the audience that people wouldn't pick up on. Cassie says she spent hours reading through baby name books, and when she saw it and she thought, "can I break it down into something?" And excitedly realized that she could. Interestingly, Cassie says she found the name Jace on the same page as Cassandra.

A selfie with Cassandra AND Harry! 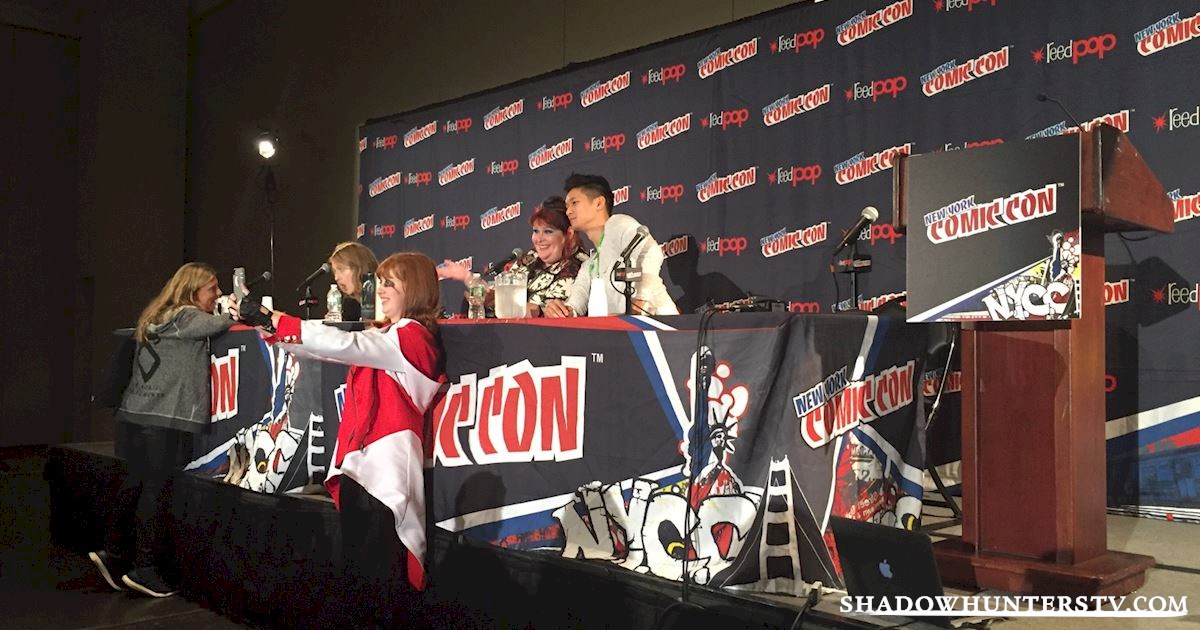 Harry on his favorite moment on the set so far...

A quote about how much he enjoys playing the character and making the scenes happen: "On this particular show, there's so much to draw on from the books, there's snarkiness and there's sassiness and there's also compassion and vulnerability."

Harry says he's honored to play Magnus Bane. When asked what was the most compelling thing about playing the role, he said:

"Glitter, eyeliner, hair that can reach the heavens."

Harry said from the outside Magnus is a very glitzy character, but underneath he's a really compelling character. Harry liked that Magnus has been through so much, and there's so much experience that he's still dissecting and unpacking. 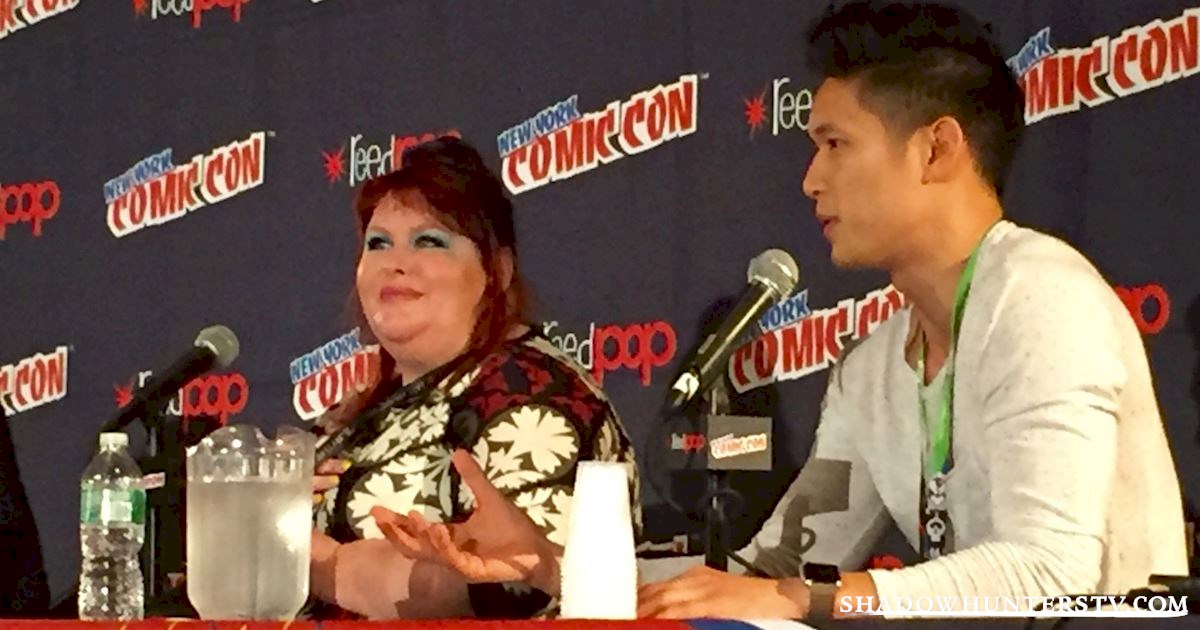 The big reveal is finally here!

Now revealed! The cover of Lady Midnight, first in the forthcoming Dark Artifices series! Out March 8, 2016!

The moment Harry turned up! 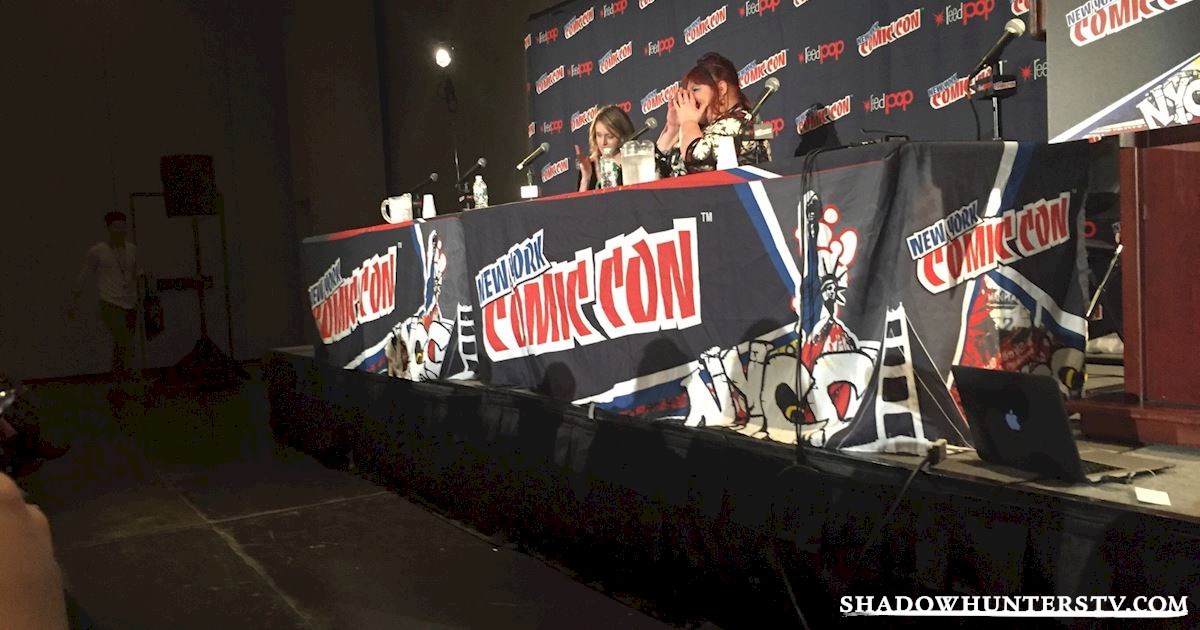 On the casting of the television show...

This answer got interrupted. Because you guys, Harry Shum is here.

One fan is very happy to have gotten a selfie with Cassandra! 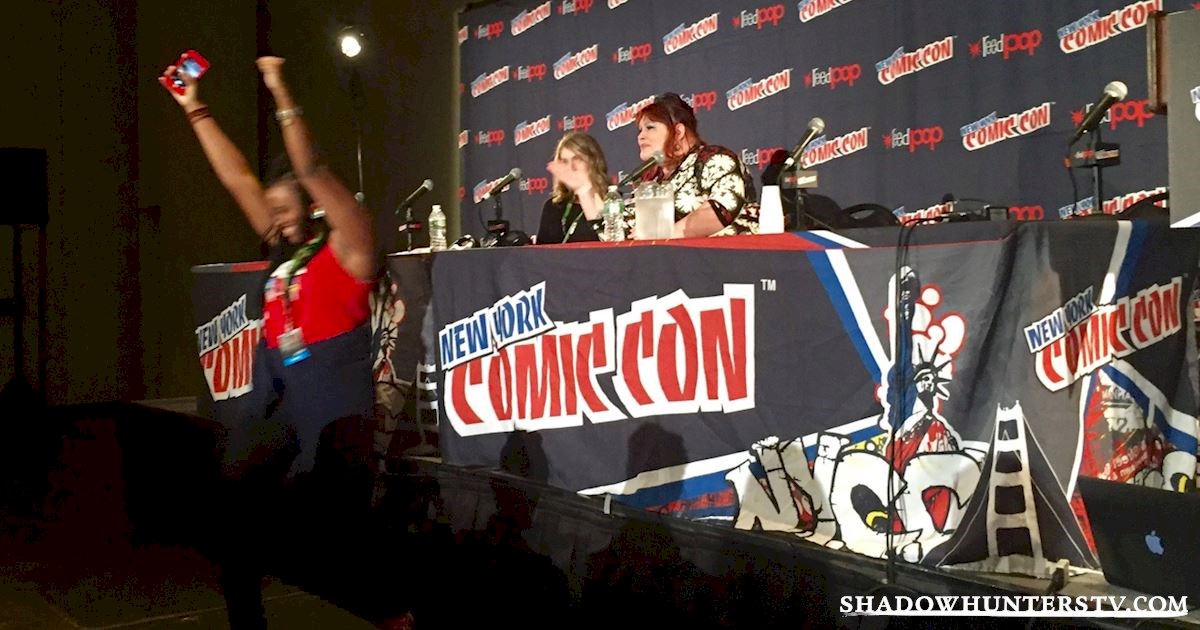 A fan just got a selfie with @cassieclare pic.twitter.com/DT0IPS8ILl

Her advice for young authors...

After a quick discussion about the difference between realism and non-realistic fiction, Cassie made the point that all stories are about people, so the key to writing is to think about the main characters. To ask what the characters want more than anything else in the world, and do they get the thing they want?

And this quote, we loved: "Know what your characters want. If they get it, it's a happy ending, and if they don't, it's a tragedy."

Cassie also suggested that authors describe their characters by writing out all the things about them and finding the one thing that sticks out. It's a good hook.

If she could reach into the world of the books and take one thing...

A quote!: "I would filch a witchlight. It's very useful. It lights up, it doesn't need a battery. I wouldn't have to trip over things in the dark. t'm a human, so I don't think I would use steles or runes, but I would go with a witchlight. Portable. Light."

On her tour of the Shadowhunters set...

Cassie says that TV shows and books are different things. And some of the set was familiar to her (the bedroom sets for Clary and Simon, say) and some of it was totally weird to see (the way The Institute looked was similar in that it's in a church, but has a different look to it than she expected.) 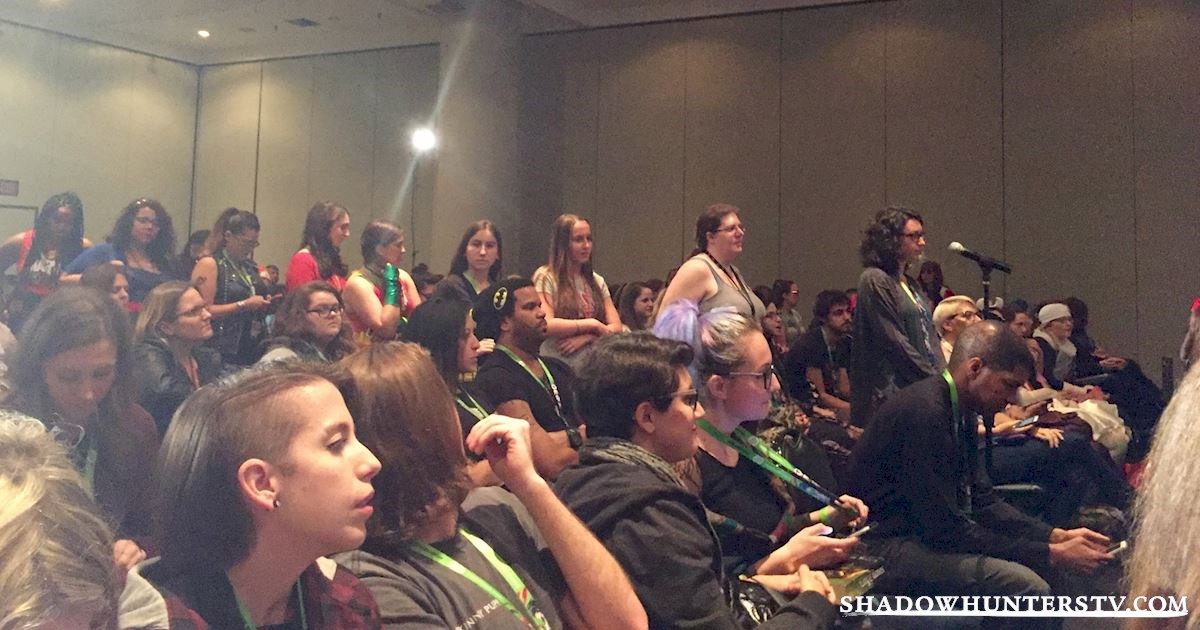 One thing @cassieclare wishes she could do is go back and give her characters definitive birthdays. #ShadowhuntersNYCC

On the way to reveal something exciting from @cassieclare1 at NY Comic-Con. #nycc2015 #matchingwhiteshirts

How many hours a day does she write?

However long it takes to write 3000 words. That's her daily word goal. Sometimes it takes 4 hours, sometimes it takes 12. Impressively, Cassie says she often works between 6-8 hours a day on average, the same as any other job.

Where did the Lady Midnight title come from?

She was inspired by a Leonard Cohen song called "Lady Midnight." She liked the idea of a very mysterious and dangerous woman embodied in the song. 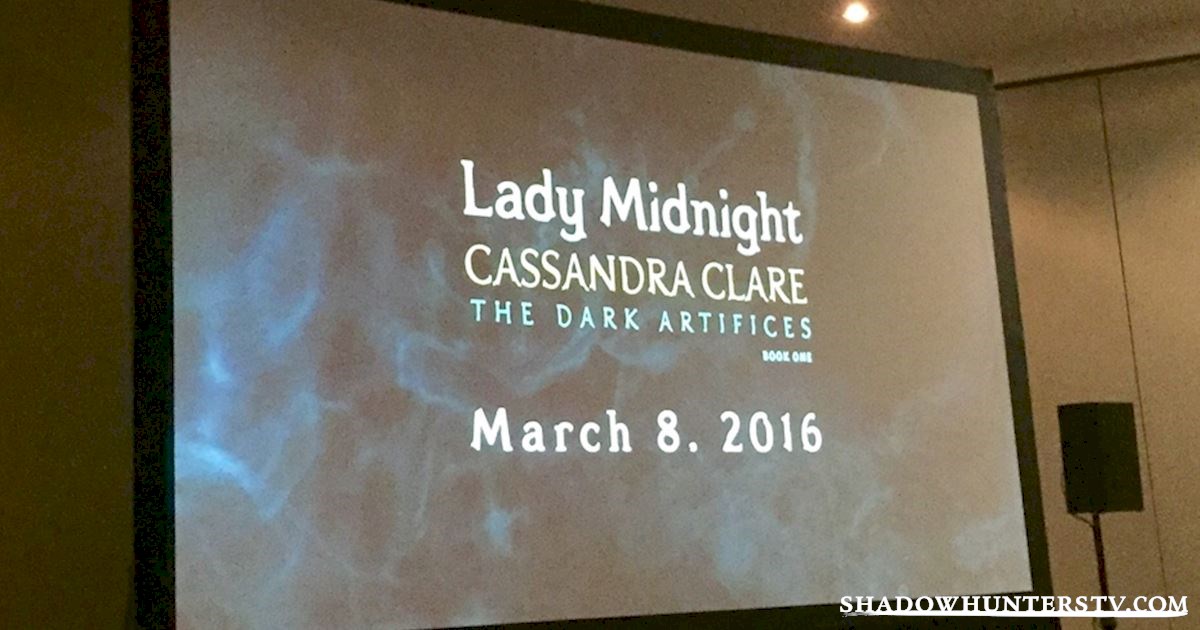 Here's a quote we loved.

When asked when Cassie knew she had to write sequels, Cassie spoke about how upon finishing the early books, she knew the story hadn't come to an end. In her words, she thought:

"Until the Clave is changed completely, that story isn't over. Oh boy. That's at least six more books."

Does she base characters on people she knows?

Yes, sometimes! It turns out the story of Jace and the spaghetti bath is actually a story of one of Cassie's childhood friends. In her words: "You take some experiences from other peoples lives all the time, because that's how things feel real and textured."

Does she have a "bible" that keeps track of the characters?

Cassie says she does - a big multi-faceted, multi-colored document that has tabs, and copies, and timelines. There are family trees, there are details of the timelines of each character. And these are double-checked really carefully.

Right off the bat, moderator Amy Wilkinson (from Entertainment Weekly) asked Cassie what her favorite part of being an author is. Her answer?

"Meeting other authors, getting to be in a room with them and being like...hiiii?"

Cassie's biggest starstruck author moment?  Meeting Suzanne Collins. "When I met her she was knitting, and I was nervous, so i just sat there and watched her knit."

Ultimately, it went okay and they had a nice chat. But other favorite authors she's met include Philip Pullman and Rick Riordan.

Line for the panel yikes pic.twitter.com/cnvdwhOXHt 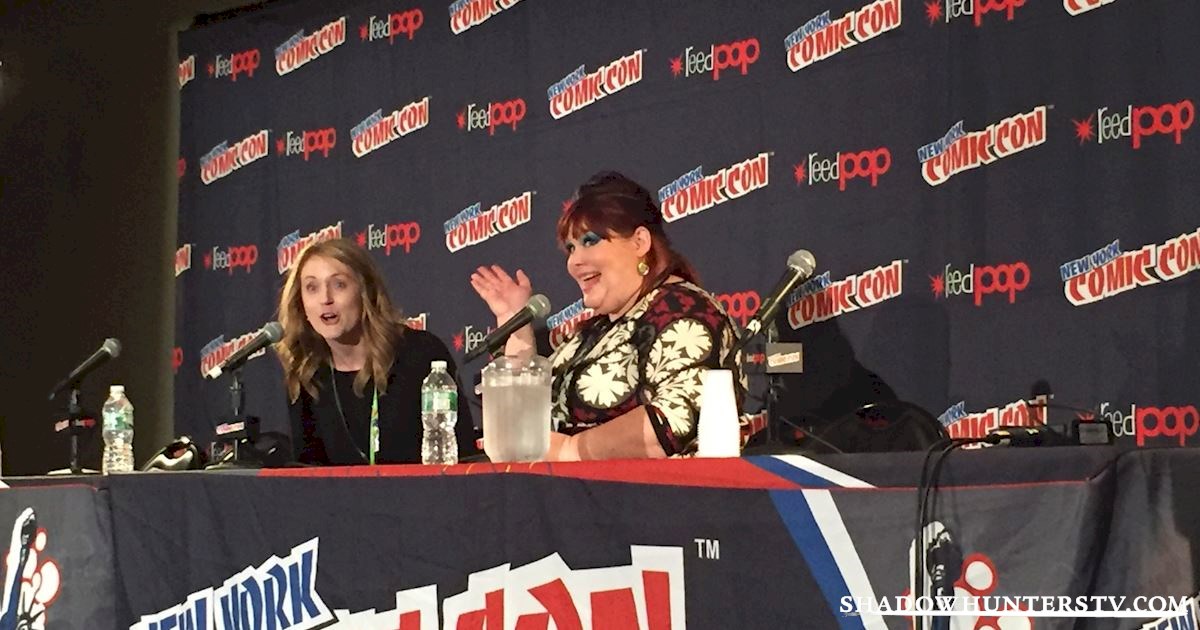 We'll also be covering this live on Snapchat!

Follow tvshadowhunters on Snapchat to experience the panel there! 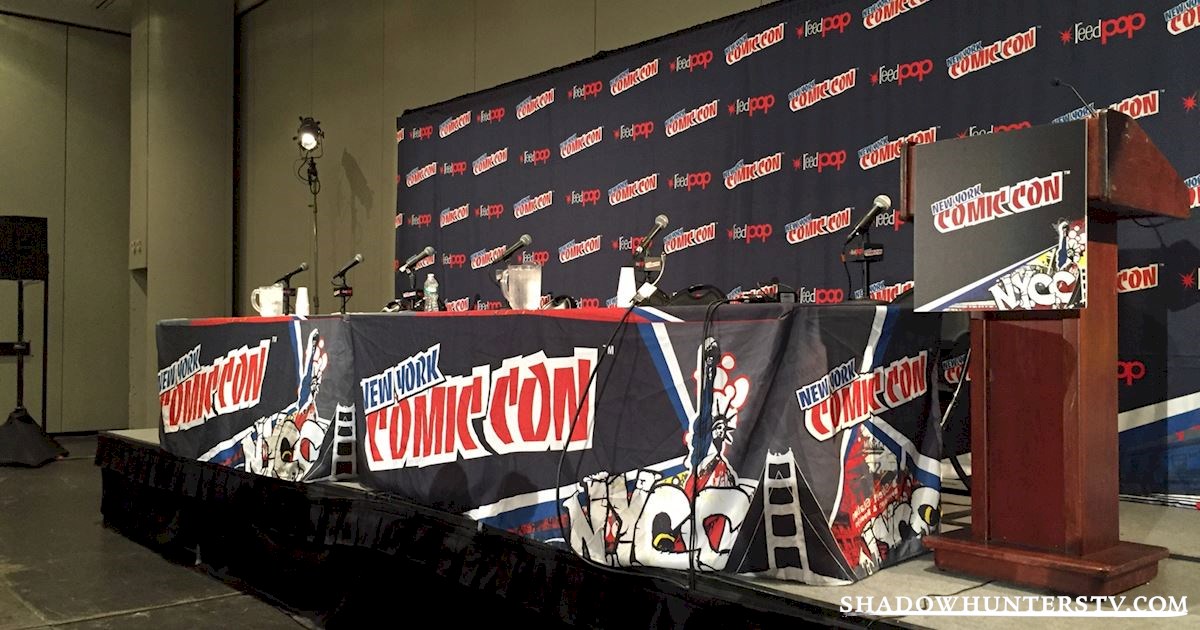 For all those of you who haven't managed to get to New York Comic Con this weekend, don't despair! We're covering Cassandra Clare's Q&A panel live right now so that you won't miss a thing!

Cassie is all prepped and ready!

Off to NYC Comicon! I'll be tweeting from there and look out for the Lady Midnight cover reveal around 2PM EST!

We get it. Magnus Bane always makes us ALL a little uneasy about our appearance! Cassie looks amazing!

@cassieclare Cassie your makeup is amazing! 😍 Have a great time!