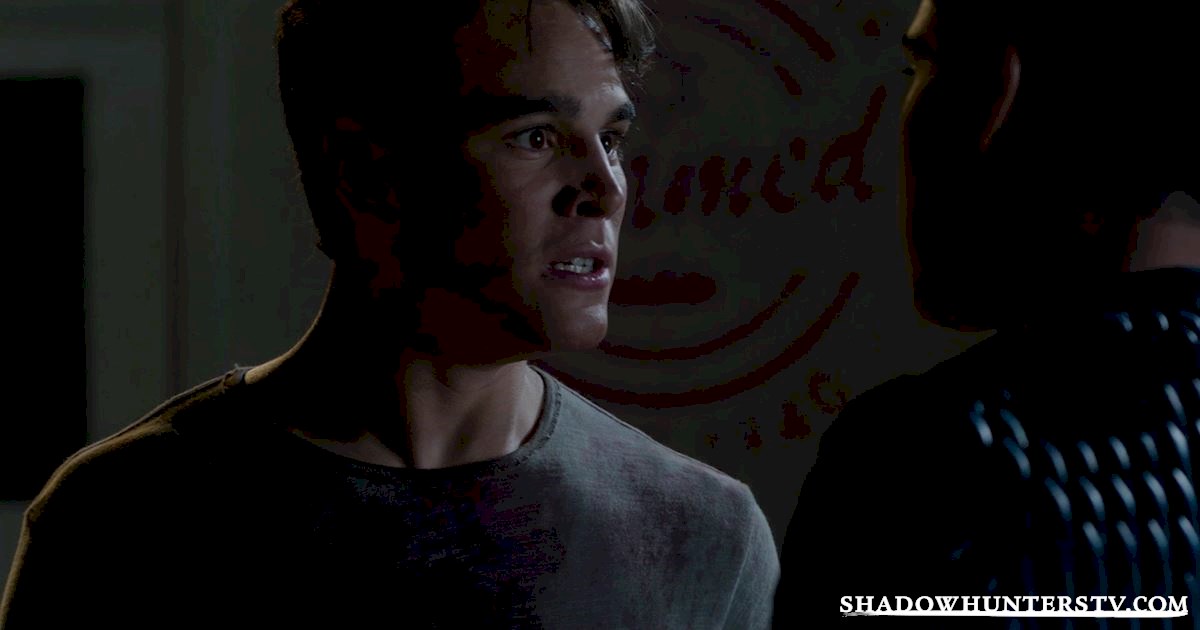 As Simon continues to freak about his new Vampire status, he attacks Raphael and runs away. When Jace and Clary find Raphael, he tells them Simon will be in his own personal hell and needs time to adjust. Clary feels guilty about being the one who chose this, but Raphael tells her Simon doesn’t remember. Will Clary tell Simon the truth? 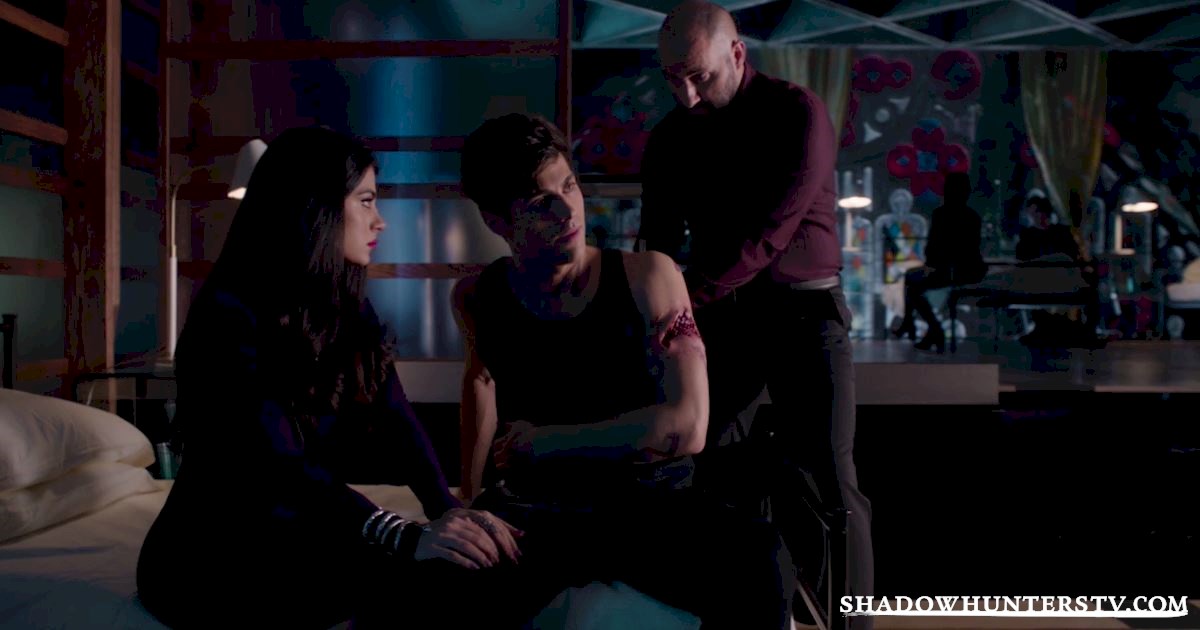 After his battle with a Forsaken, Alec is in pretty bad shape but Robert Lightwood and Izzy are there to help out. Jace calls Alec, but Izzy picks up and tells Jace that a freaky Forsaken who had Seelie blood with angel properties was able to break through the wards protecting the Institute. Clary needs help finding Simon. Jace suggests she ask Luke for help since werewolves are great trackers. This is a big deal because it's clear now that Jace trusts Clary as a Shadowhunter in her own right. 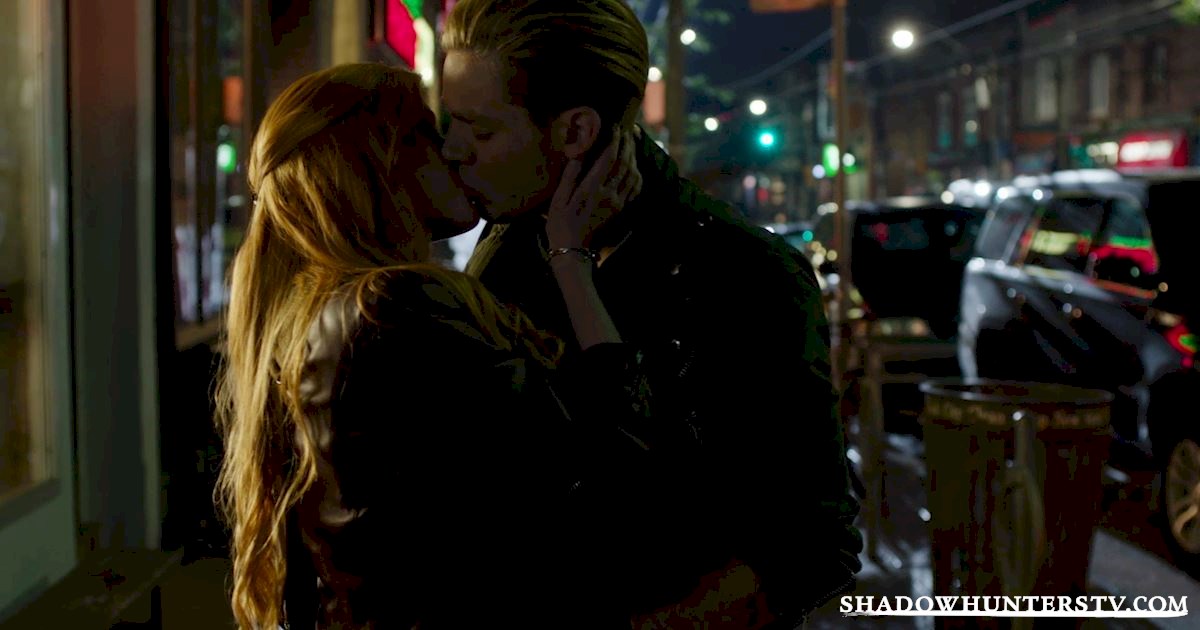 But also, before they head off to save stuff, Clary tells Jace they still need to talk about their relationship but instead...kissing. 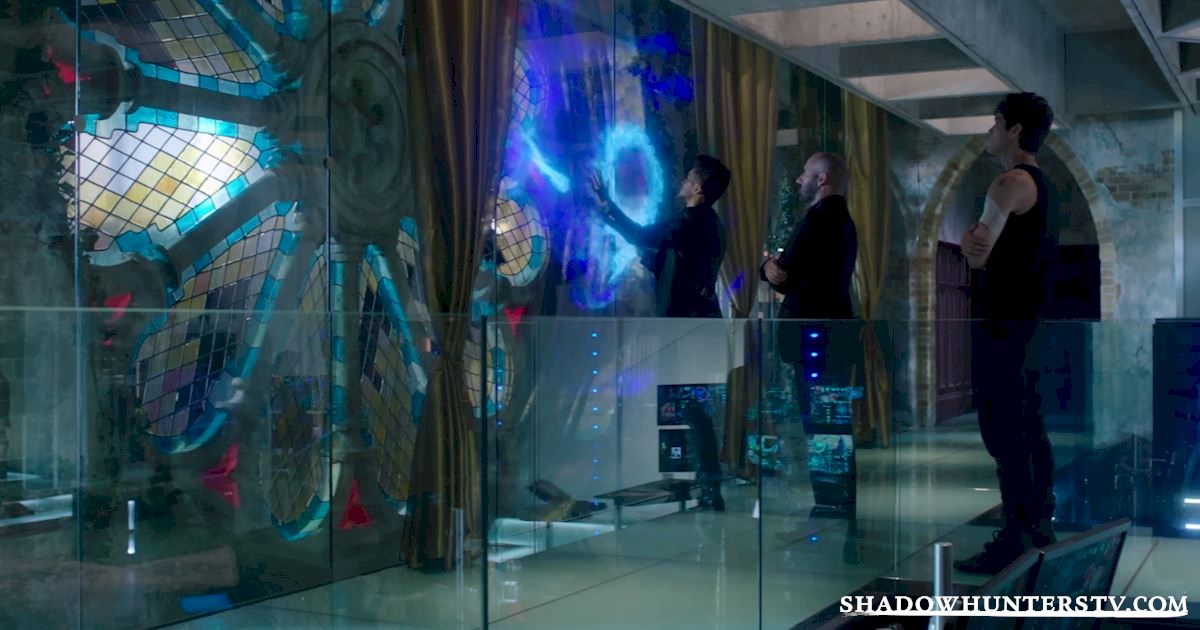 Back at the Institute, Magnus is adding wards to protect against further attacks, although he warns Robert that his wards cannot totally prevent another Forsaken but they will slow it down. Meanwhile, Meliorn arrives at the Institute under false pretenses and is immediately arrested by Lydia for allegedly stealing state secrets on Valentine's behalf.

Can we really trust the Seelies? 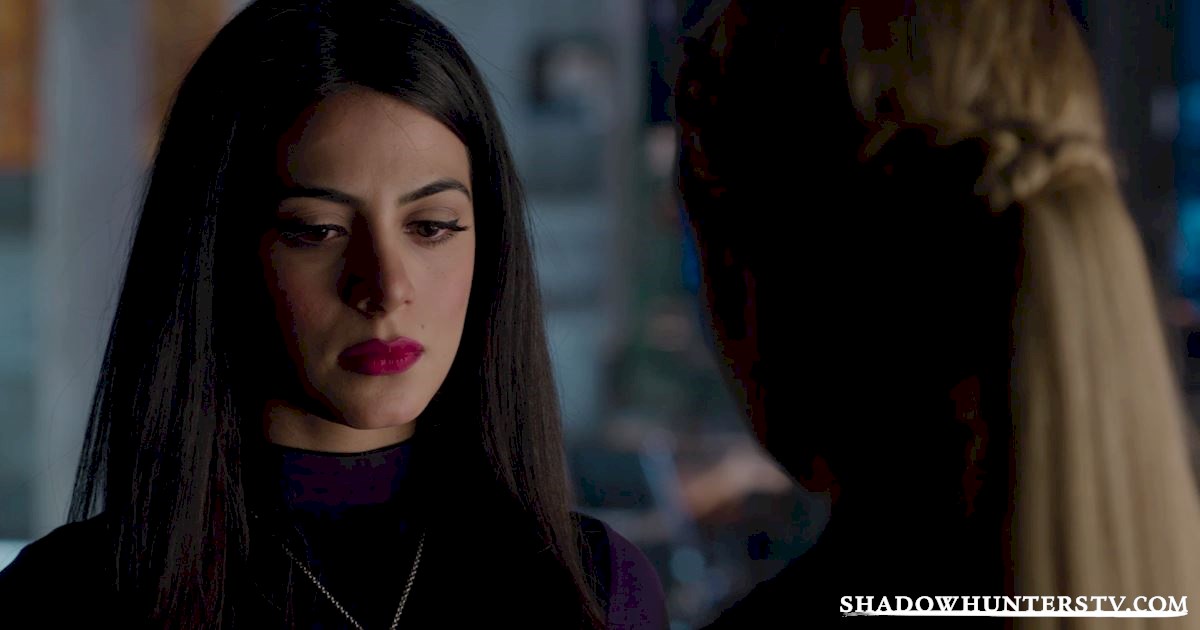 As Meliorn is taken away, Izzy argues with Lydia and defends Meliorn, trying to explain that he only helped them to rescue Simon from Hotel DuMort. Lydia warns Izzy that she was suspected of revealing state secrets and believes the Seelies had been working with Valentine all along. Izzy protests! Valentine killed the Seelie scouts and used their blood -- but without proof, Lydia isn’t interested.

Mama and Papa Lightwood are in trouble... 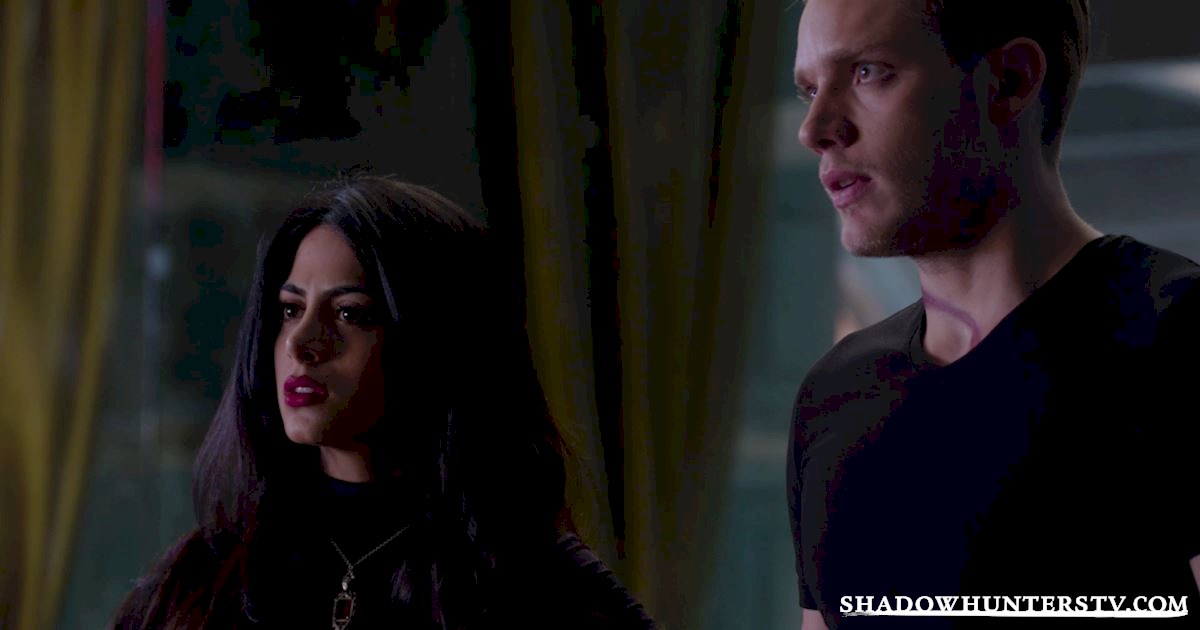 Jace arrives at the Institute and tells Izzy and Alec that their parents are being sent back to Idris by order of the Clave.  Alec says that he’s not so sure their parents are completely blameless and reveals that Robert and Maryse used to be members of the Circle but were pardoned in exchange for their assistance during the uprising. Jace doesn’t like Alec’s insinuations and says he knows what kind of people Robert and Maryse are. When Lydia appears, Alec tells Jace and Izzy about their engagement but they aren’t exactly thrilled about the news…

Just one bite! I swear! 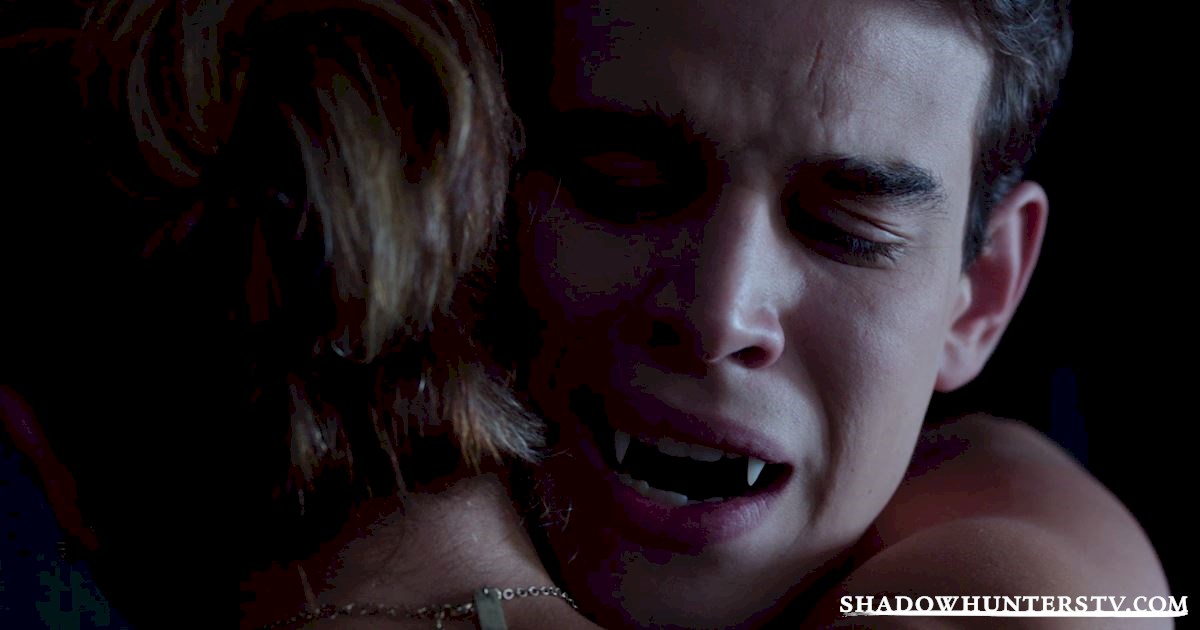 With the help of Luke, Clary tracks down Simon to his bedroom where she finds him on the verge of taking a bite out of his mom. Clary convinces a teary-eyed Simon to leave with her so she can look after him. Outside, Luke assures Simon that he will feel better in time but Simon is distraught when Clary tells him it was her decision to bring him back as a Vampire. 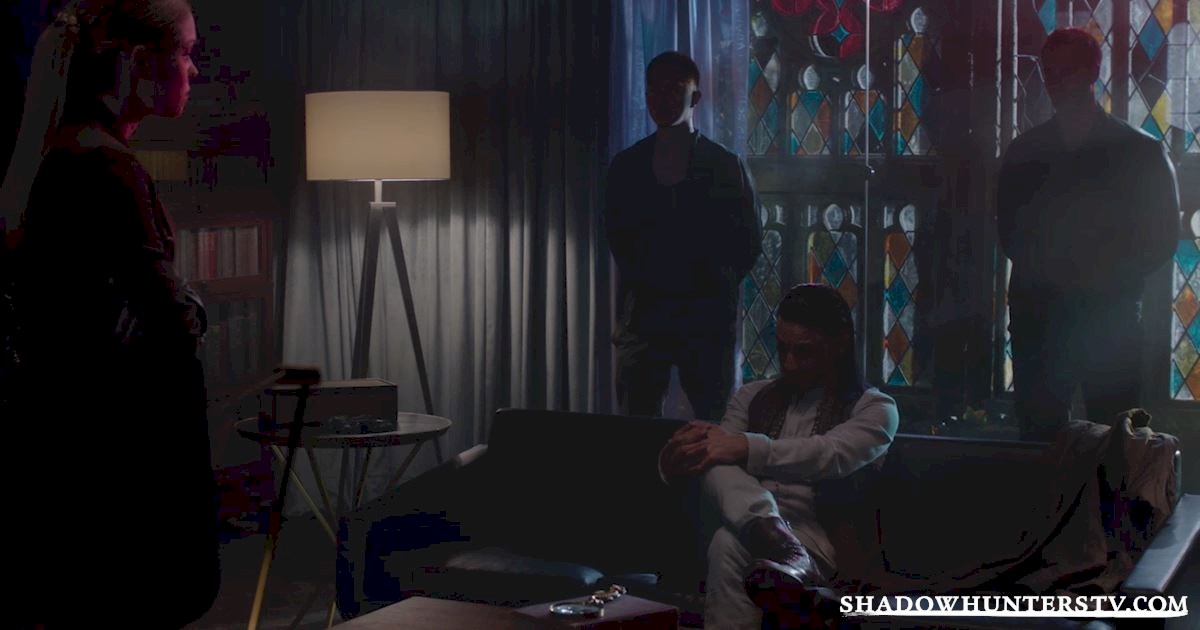 While Meliorn is interrogated by Lydia he reveals that Clary has the Mortal Cup. As members of the Institute search Clary’s bedroom, Jace tells Alec that he’ll bring Clary back so she can hand over the Cup herself. Once Alec has left, Jace sends Clary an image of a blocking rune and tells her to draw it because it will stop anyone from finding her using Shadowhunter tracking. Jace tells Clary to lay low and she realizes the only place that both she and Simon will be safe is the Hotel DuMort… 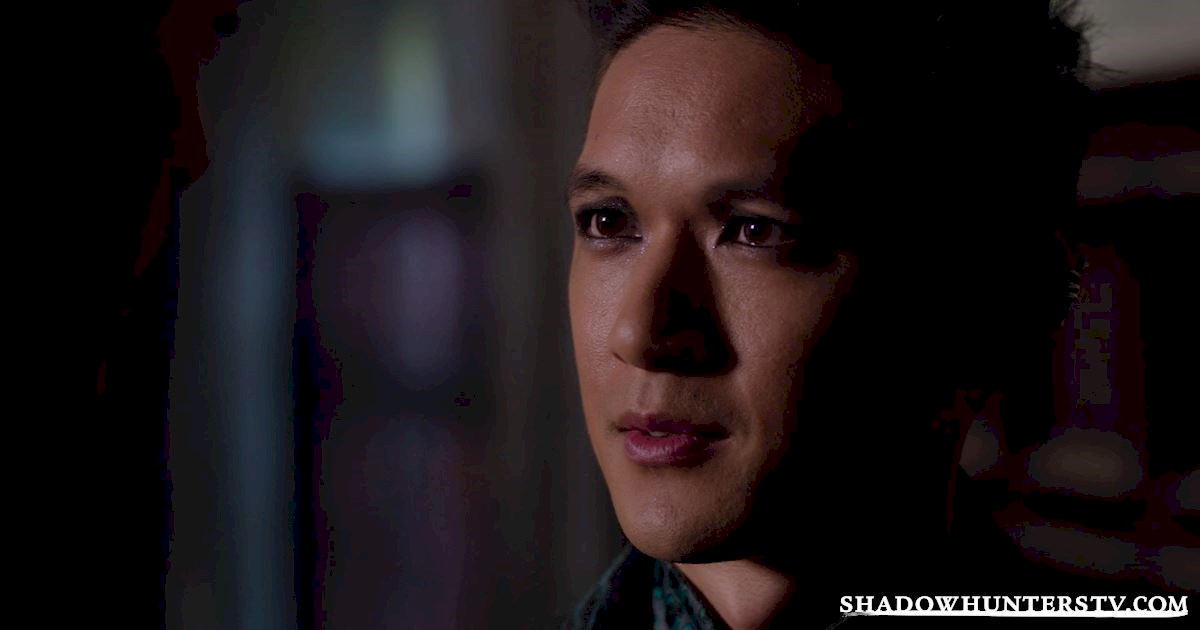 Jace enlists the help of Magnus to steal Alec’s stele in order to retrieve the Mortal Cup from a safe in the Institute. Alec finds Magnus outside his room and said he's decided to get married. Magnus flirtatiously says he and Alec should probably do dinner first, but Alec continues to say he's proposed to Lydia. Magnus is clearly devastated and Alec tells him it makes sense because it's a 'solid partnership'. Making it clear he doesn't believe Alec is making the right decision, Magnus leaves. Feelings explode. 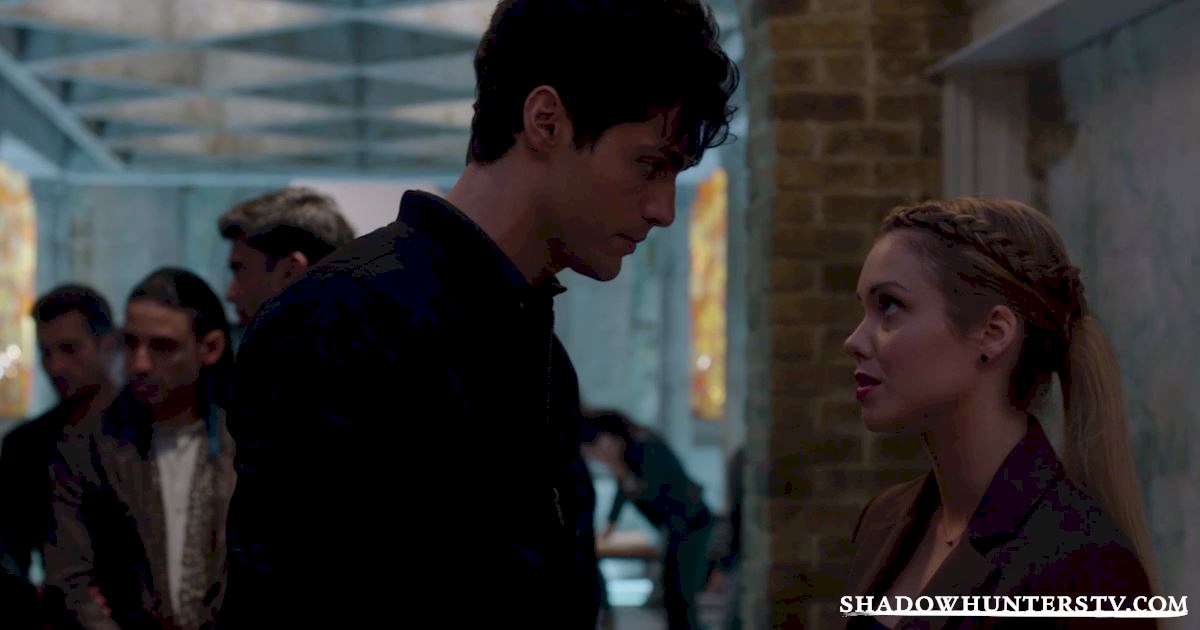 As Meliorn is being taken to the Silent Brothers, Alec asks Lydia if she is sure this is the right thing to do. Seriously, the Silent Brothers questioning could actually KILL Meliorn.  Lydia tells Alec it’s the only option they have and explains how she wouldn’t do this if she didn’t have to. Lydia reveals that her husband, John Monteverde, died because they went into a raid against Demons with too little information and were overwhelmed. John was killed and Lydia still blames herself for his death.

Can’t we all just get along? 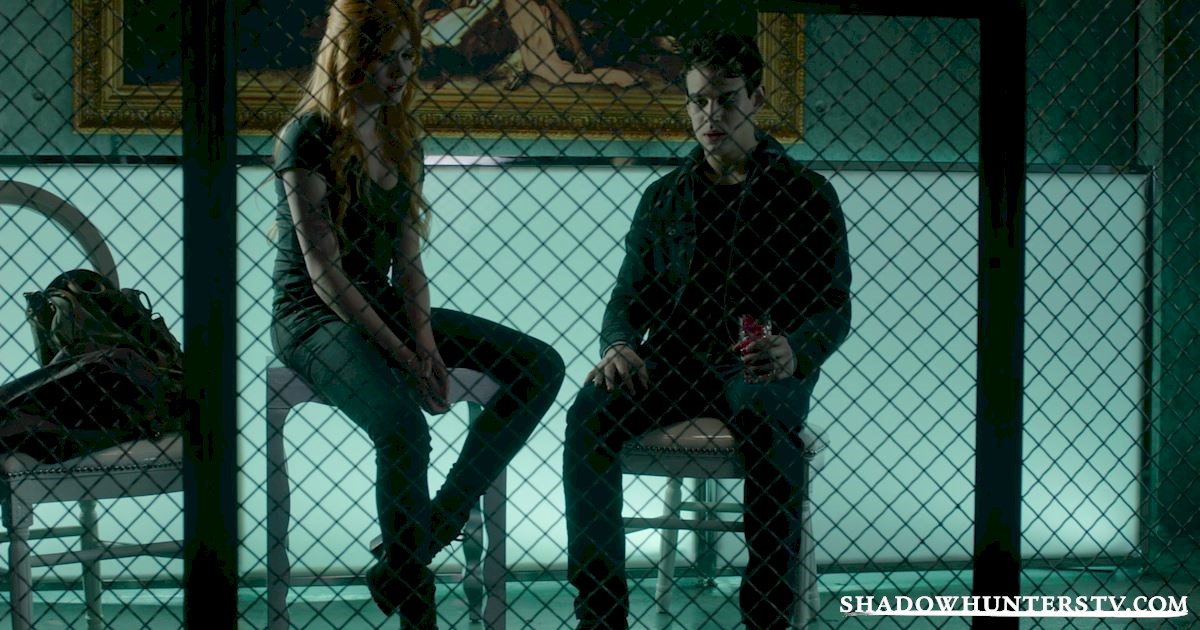 Simon feels better after drinking delicious delicious blood and has a heart to heart with Clary. She tells Simon that she couldn’t bring herself to let him die and brought him back because she wanted him to be part of her world. Jace and Izzy arrive and tell Clary, Simon and Luke that they’re going to save Meliorn from the Silent Brothers in the City of Bones. 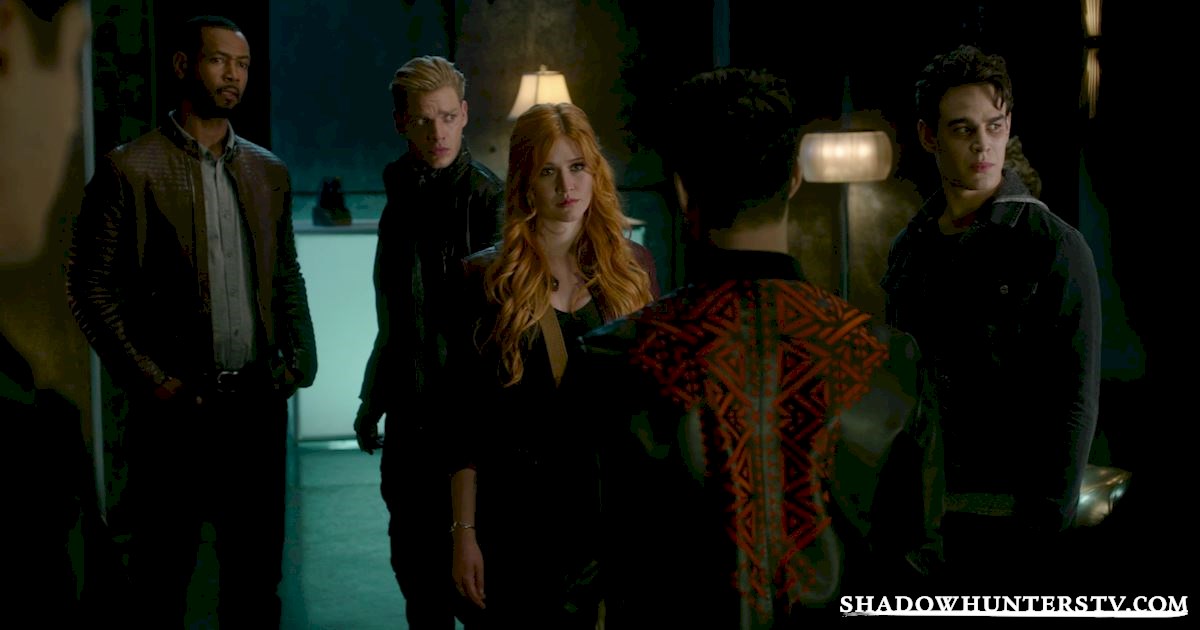 It’s risky without backup, so Clary suggests forming an alliance between the Vampires, Werewolves and Seelies. Raphael is sceptical, but Clary tells everyone that they are a new generation of Shadowhunter and should work together to defeat Valentine.

What happened to Parabatai bonds, guys?! 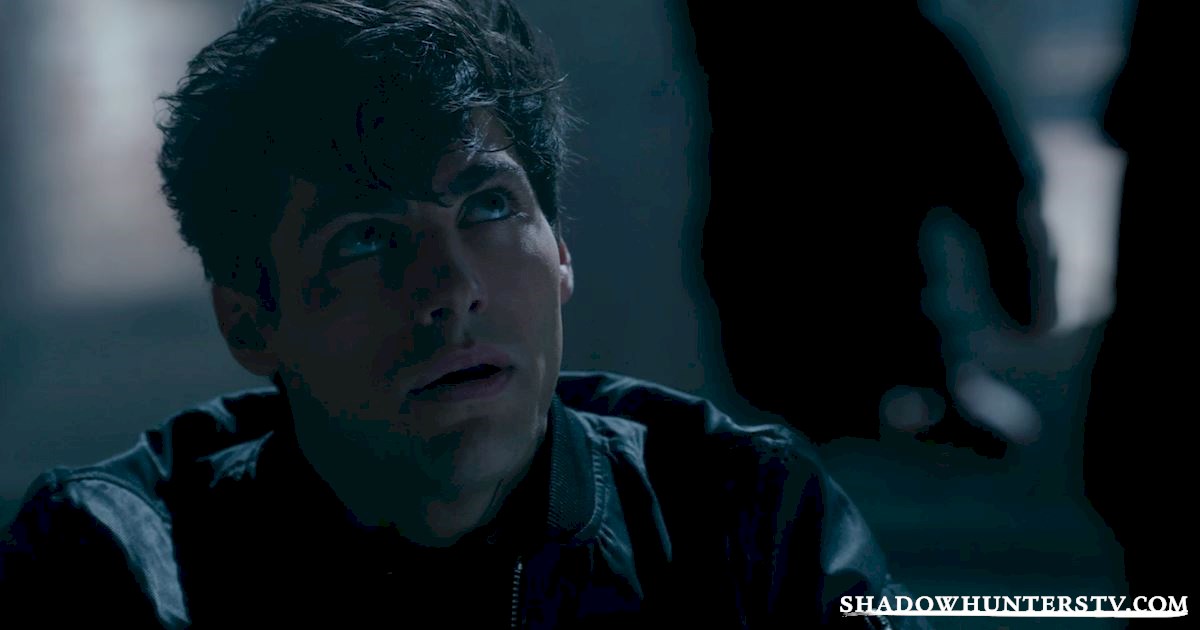 The Vampires, Werewolves and Shadowhunters surround the entrance to the City of Bones and prepare to attack the Clave members who bring Meliorn. Everyone is shocked to see Alec leading Meliorn but the attack goes ahead as planned. When Clary and Jace confront Alec, there's some serious fighting. Jace attacks Alec so Clary and Meliorn can escape and then begs Alec to join them in fighting against Valentine, but Alec isn’t willing to work against the Clave.

Are you ready to meet daddy? 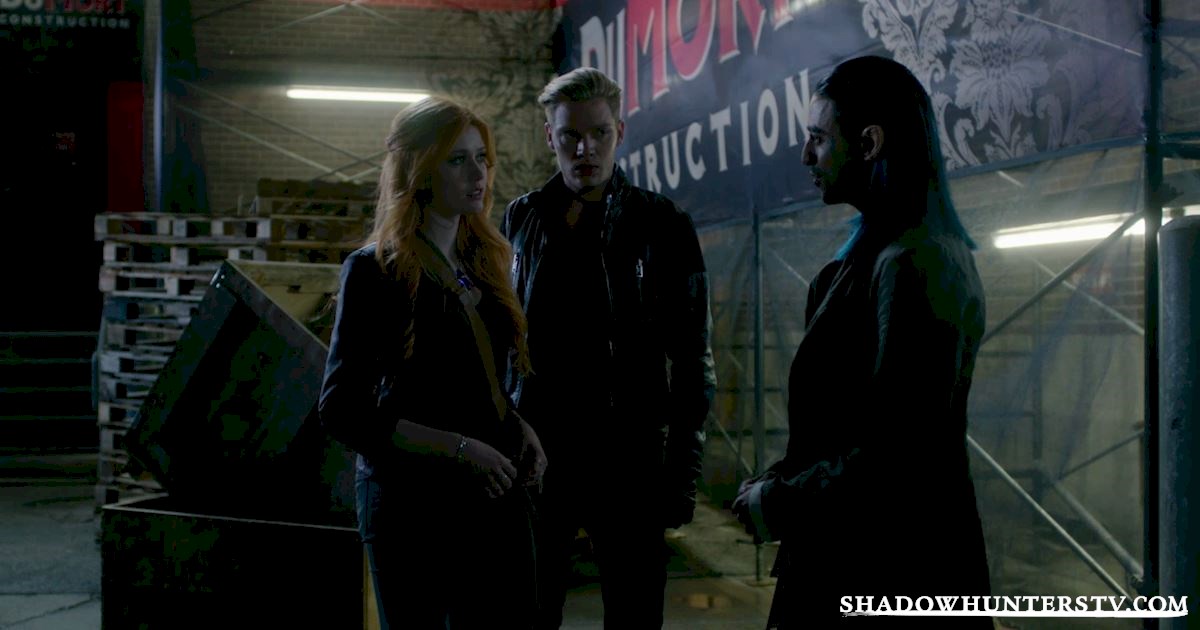 Leaving Simon at Hotel DuMort to get his new Vampire life in order, Jace and Clary agree to take Meliorn back to the Seelie Court. Izzy and Meliorn share a passionate kiss before she leaves to see what is happening at the Institute. As Jace and Clary are about to leave with Meliorn, he tells Clary that if she’s ready, he can help her find her father…

The Institute and The Clave go on high alert.